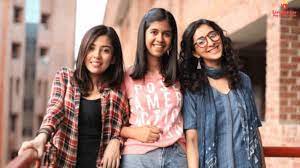 The series revolves around three girls who are studying in Engineering college. The series mainly focuses on how they deal with the college life problem, their studies, and everything. Engineering Girls Season one was no doubt it was loved by the audience and season 2 is also doing great. So today we will be sharing some information about Engineering Girls season 3.

The first season of Engineering Girls was premiered on 1st June 2018 on YouTube on TVF Timeliners. Season one consists of 5 episodes with a running timing of approximately 23 minutes. It was rated with 6.9 on IMDB. Season one was quite popular amongst the viewers.

Engineering Girls Season 2 was released on 27 August 2021. No doubt it is a short series that contains only 5 episodes just like season one. With the running timing of 20 minutes. All the episodes were released on the same day. Season 2 was rated with 7 out of 10 on IMDB. If you haven’t watched the Engineering Girls Season one you should go and watch the season so that you can understand season 2 better.

As there are no official declarations about the release of the third season. We all know that Season 2 was released recently so it is too early to expect the series. You can watch season 1 on YouTube and season 2 on Zee5 without a subscription. As soon as we’ll get any further information regarding the release of the third season we will update you as soon as possible. Till then keep reading and stay connected.

Also Read: Is ALTBalaji Coming Up With Crimes And Confessions Season 2?

As season 2 is recently released it is difficult for us to guess the future Cast. But as we have seen that season one cast returned in season 2. Chances are less for the third season to come but if in any case, it will return we can see the same cast. Let’s take a look at the cast of Engineering Girls Season 2.

Engineering Girls Season 2 was Directed by Himali Shah written by Manan Madaan and produced by Arunabh Kumar. The main character of the series is Sejal Kumar as Kiara, Barkha Singh as Sabu, and Kritika Awasthi as Maggu.

The story of season 1 revolves around the three friends who are different from each other and how they meet and helped each other in difficult situations. Engineering Girls Season 2 follows the story of season one. It was the last year of college and the story started when the three friends are sitting together and thinking about there are life problems and difficulties.

As it’s there last year they three our in stress about the jobs and studies. Sabu is stressed about her Startup and funding issues. Kiara is tensed about her acting school admission. Where Maggu is tensed about her job. It was the last year of their engineering. It was very precious for them as it will decide their future. What twists and turns will come in their lives? Will, they will be able to tackle them? To know everything about the second season go and must watch Engineering Girls season 2.

As season 2 trailer is recently released and also there’s no official announcement regarding the release date of season 3. And expecting season 3 is not required because season 2 ended happily. Here we are dropping the season 2 trailer so that you can enjoy watching it and decide whether to watch the series or not.