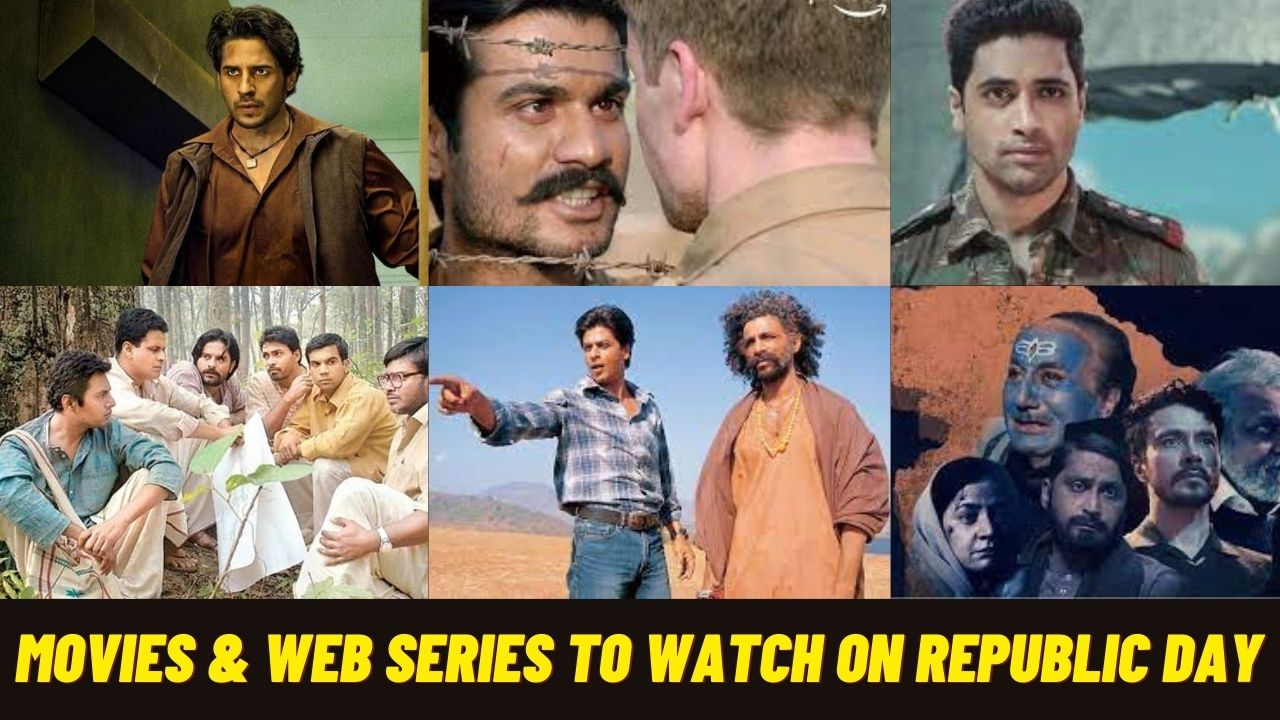 Republic Day of India has always been a day to remember our freedom fighters and the journey through which India went to get to the point where we are today. Why not celebrate it by watching shows and movies that Instill the core Indian Values and respect for the country? We have done thorough research in creating this list and would love to spread the Emotions of patriotism across the country.

Also if you have kids make sure to make them watch these incredible movies and shows on Republic day to make them realize what Our country is and Was earlier. As I remember my childhood days watching such movies on Republic day with my family while my mother used to bring on delicious food to the table. It has been a lifetime memory for me and it might be the same for your kid too.

Movies To Watch On Republic Day

The first movie I would like to suggest will be Mission Majnu. I don’t understand why it’s underrated and why there wasn’t a theatrical release of the film, because the movie is mind-blowing. Starring Siddharth Malhotra and Rashmika Mandana, Mission Majnu focuses on an Indian Spy, who is settled in Pakistan to uncover the truth of illegal atomic bomb testing in Pakistan. Filled with emotions and Patriotism, I would definitely suggest going and watching the film, you will not regret it. The movie describes how Siddharth’s Father became a disgrace to the country and how he would do anything for the country.

Siddharth’s acting is top-notch, and Rashmika has played her role really well too. The supporting characters are wisely chosen for their roles.

Well, this film doesn’t need an introduction. I guess many of you have already watched it, but those who haven’t watched the film should watch this right now. Uri, a military action film is fictionalized from true events, the 2016 Surgical strike of India on Pakistan. Starring Vicky Kaushal and Yami Gautam in lead roles, the film revolves around the events that occurred during the 2016 surgical strike. Col Kapil Yadav, a para-military officer, was the center of attraction of the film. Uri discovers how Col successfully did the surgical strike on Pakistan.

Not just patriotism, the film also discovers the emotional side of a soldier while he’s protecting the nation.

The list I am making here won’t involve the movies most of you have watched, rather I would be focusing on the movies that fewer people have watched and should be worth watching. Article 15 is that kind of film. Ayushmann Khurrana and Social issues are like bread and butter. Article 15, starring Ayushman has educated the audience about the most underrated issue in the country. We think we talk about it, but we actually don’t. Ayushman has played the role of a police officer who is in search of three village girls, who went missing from the area.

While searching for the girls, he discovers the issue of casteism in the country and how it has destroyed people. In simple words, he discovers ‘caste-based oppression’ in the town and how it has affected the downtrodden. Article 15 of the Indian constitution states, there should be no discrimination on any basis, and hence the movie was named after that.

I decided to include this movie, as it needs to get more attention than it has already got. Many of us have watched it, but those who haven’t should go right now and stream it. Creating a fuss in the country, The Kashmir Files is a masterpiece, even if it was a low-budget film. Vivek Agnihotri has definitely given us goosebumps while telling a fictionalized story of ‘What Happened to the Kashmiri Pandits’ back then. The film is about the genocide that happened in Kashmir with Kashmiri pandits and how this matter was silenced by the scholars who declined that it never happened.

There are no complaints about the films, the story is mind-blowing, the cast is fantastic and the storytelling is top-notch. So, give it a try, I know you won’t regret it.

MUST-READ| Top 10 Indian TV Shows Based On A True Story You Should Watch!

Directed by Sashi Kiran Tikka, the film is based on Major Sandeep Unnikrishnan. We have seen plenty of movies from many different angles about the 2008 Mumbai Attacks, while this is also based on the attacks, but with a very different and unique angle. The film is based on true events and is inspired by Major Sandeep Unnikrishnan, who was martyred in the 2008 Mumbai Attacks.
You don’t just get to see the professional life of Major Sandeep, but you get to see his personal life. It shows how Major Sandeep, helped in saving many people in the Taj hotel and how he was simultaneously managing his personal life.

The ending scene of the film is very heart-touching, and this could be your best choice to watch this republic day.

An Indian Air Force officer, Gunjan Saxena has made all of India proud for her hard-working contribution to Kargil War. Saxena joined the force in 1996. Gunjan Saxena: The Kargil War, starring Jahnvi Kapoor is inspired by the life of the pilot. The movie revolves around the life of the officer, and how she has to face difficulties being the only woman pilot in IAF. To tell you some facts, which you will also see in the film, Gunjan Saxena was the first Indian Women Pilot, who flew in a combat zone.

The main work of the officer was to help the soldiers who got wounded in the Kargil war and transfer the necessary supplies. Again, the ending is very emotional and you should definitely add this to your watchlist.

MUST-READ| 20 Detective Movies In Hindi That Are Way Too Captivating!

One of the highest-grossing films of 2021, and definitely worth watching. Starring Siddharth Malhotra and Kiara Advani, the movie is full of patriotism and I would really suggest watching this if you haven’t watched it yet. This biographical war film is also inspired by true events from Kargil War. Vikram Batra, a martyr of the Kargil war is the main attraction of the movie. Again, it includes both, the personal and professional life of Vikram Batra. The film is definitely not overrated (as some might think). The life of Vikram Batra is very well briefed in the film.

Everyone should know about this inspiring man and should watch the film.

Swades is one of the best classic films of Bollywood starring Sharukh Khan. This movie doesn’t include soldiers or describe a story about war, rather it focuses on the story of India, and it shows the beauty of India. Sharukh Khan has played the role of Mohan Bhargava who is an NRI. He was working at NASA. But to connect to his roots and bring his nanny back to the USA.

But when he returns back to India, he understands where he actually belongs.

MUST-READ| Ritvik Sahore Web Shows: In Which Shows He Had Worked On?

A very underrated film, but a must-watch film for everyone. Starring one of the biggest actors of this age, Manoj Bajpayee, Nawazuddin Siddique, and Rajkumar Rao, the film is one of a kind. The movie is about a 14-year-old boy named Jhunku, who discovers where he belongs. The story is set in1930’s British Bangladesh. A group of school-going students with their teacher, played by Manoj Bajpayee embark on a journey to speak against the Brithishers.

Chittagong is a fantastic film and I think everyone should watch it at least once.

The film discovers how the airplane was hijacked and how Neerja was able to rescue many of the passengers. I would really suggest your guys watch the film.

MUST-READ| 10 Movies Like Sita Ramam That Will Make Your Day!

Netaji Subhash Chandra Bose changed the way our Freedom Fight took place, the Show Forgotten Army represents all the Struggle he did to accumulate an army in Japan and Strike on the Englishmen in India.

The Journey was tough to gather Indians in a foreign nation, and to come over to India it was another incredibly harsh step taken by Subhash Chandra Bose. Yet thousands of Indian soldiers managed to cross the border and attack the Britishers face to face, this step ignited a spark for freedom fighters in India, and later on, this spark converted into flames and made India Free from oppression and foreign rule.

This is a must-watch show on Republic Day to respect the efforts done by our ancestors to give us the future we live in Today.

Women in Today’s society work shoulder to shoulder but this was not something that was always there in India. The show is about a female officer who determines her strength when other men make her feel inferior. This is a must-watch show as Nimrat Kaur has done remarkable acting and you’ll surely salute her.

This show is on the next level not only does it makes you know insights into Netaji’s life but will make you feel overwhelmed when you’ll know some secrets from the Freedom fighting era.

Subhash Chandra Bose’s Death has always been controversial and it’s always said that the government has hidden some deep files in their closet to hide what really happened to him.

Controversies apart from the show are mind-boggling and It deserves to be on this list you should watch the show to know some untold truth about Freedom Fight.

The story is about 21 soldiers on the borderline of India who serve the English empire and fought with the Afghani Invaders who tried to Infiltrate Indian Borders and taught them a lesson that has been engraved on those forts to date.

The 36th Sikh Regiment has been covered various times in Bollywood and will give you the same spark, if you don’t have time to watch the whole series you can also watch Kesari by Akshay Kumar which is a masterpiece from every angle.

We all know the tragic Incident that took place on 26/11 in Mumbai where terrorists infiltrated the Indian borders through the sea and attacked various places in Mumbai. Many were dead in this incident and thousands were injured.

Many brave officers lost their lives and many killed the terrorists, it is a tip on the kind of show that will surely leave you to heartbroken. But will surely instill braveness in our Indian officers.

If you are looking for some unrealistic thrill this show has everything you are seeking, moreover, the action and adventurous storyline will keep you hold till the last episode. Special op is a story of a Secret agent unit that is hunting the biggest terrorists and cleaning their organization. The show has already been released 2 seasons and has been a massive hit.

The Family man is a show full of fun and National Vibes. The story revolves around an undercover cop whose family does not have a clue about what Job he is up to. And running into troubles at times as he has to solve cases and manage his family as well.

Moving apart from the drama side of the show the family man is all about hunting down terrorists and making India free from all the clutter.

MUST-READ| 20 Movies Like Vikram Vedha That Are Full Of Action!