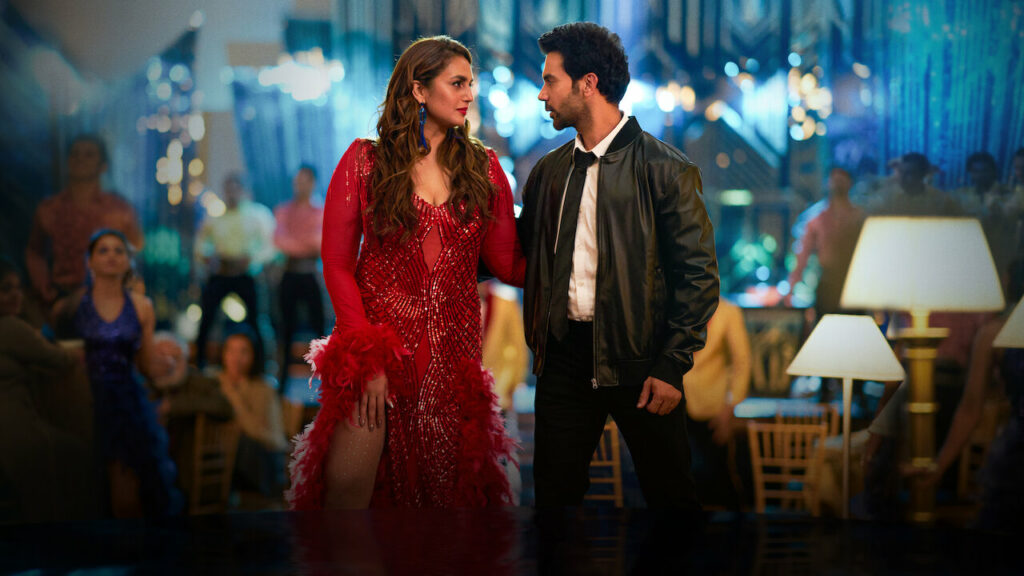 We aren’t sure where to begin. With Rajkumar Rao back in yet another sizzling role, Huma Qureshi making bold waves and moves in her red dress and a dangerous plan, and Radhika Apte all set to dazzle us yet again, we are spellbound. Not to mention the very name and the vibe of the movie send us running for the hills with excitement and glee!

Yes, you guessed it right. We are talking about Monica O My Darling and boy, are we so glad of its existence? Love, drama, sex, and blackmail? Oof, now there’s a winning ticket!

But, hey, doesn’t that seem a bit familiar? We swear to the theatre gods, we had strong ‘Masti’ flashbacks while watching this gem of a movie, only to find later on that Monica O My Darling is actually adapted from a novel ‘Burūtasu No Shinzou’ written authored by Keigo Higashino. Well, that’s all very impressive but still.

Anyway, before we get to run away with our excitement for this striking story, let’s discuss a more pressing matter at hand. When are we getting part two? Because WE BETTER GET A PART 2! Or else there might be a revolution for you to deal with, Vasan Bala!

Seems to us that the humble director did not take our threats seriously because there hasn’t been any news regarding the release date for part 2 of Monica O My Darling. Which is not only infuriating but quite depressing as well. The original movie received a tremendous response from the viewers. Sure, there were some who didn’t like it, but who cares? The majority of the people were enraptured by Huma’s enchanting presence, Rajkumar Rao’s finesse, and Radhika Apte’s charm!

So all in all, we are all dying for a second installment. What do the producers want us to do after watching the first part of that gorgeous movie anyway? Sit around and wait? No. What we are actually going to do is sit around and wait ANGRILY, alright? That should teach Netflix a good lesson. holding back a sob

If there is an actress who is the perfect fit to play the role of a seductress, it’s Huma Qureshi. Her portrayal of Monica Machado in the movie was equal parts sensuous and mysterious.

The movie begins with a kill. And somehow our hero is involved. Rajkumar Rao’s character Jayant, working for the Unicorn Group of Companies in Pune, gets ensnared by the beautiful secretary, Monica even though he is in a relationship with the daughter of the boss. Bad move there, honey. Don’t mess with the boss!

But, unable to resist the temptation, he goes and does exactly what he shouldn’t have done. Messes with the goddamn boss. His and Monica’s fling leads to her getting pregnant. (Fast work there, Monica!) Scared witless and unsure of what to do, he agrees to her monetary demands. Nothing wrong there. Just a woman demanding a man holding up his end of the bargain, right?

Well, not quite. It seems that Monica Machado’s endgame is quite big. When Jayant gets blackmailed and reaches the Khandala hotel, he finds out that two of his colleagues, Nishikant and Arvind, are getting blackmailed by Monica in a similar manner. And they decide that the only way to get out of this sticky mess is to murder the red vixen. (SEE? It’s EXACTLY like Masti!)

But their plan gets ruined like it usually does. And they unwittingly find themselves in the midst of a murder investigation of some random person who they thought was Monica but were soon corrected when she walked right through the office doors the next day.

Whose Body Did They Dispose Of?

You have to be in a peculiar shade of misfortune when the blame for someone you did not even kill gets pinned on you. The trio that originally set out to put a stopper in Monica’s breath disposed of a body, thinking it was hers, which is as stupid as it gets. Like seriously? You think to check twice before buying a pack of gum but it didn’t occur to you to see who exactly was lying dead inside those covers, Jayant

Well, from there on, it was a wild ride full of suspicions and revelations. Monica O My Darling is just as you would expect it to be – funny, glamorous, and a hell lot of fun. And we simply cannot wait for its second part to shake us up again!