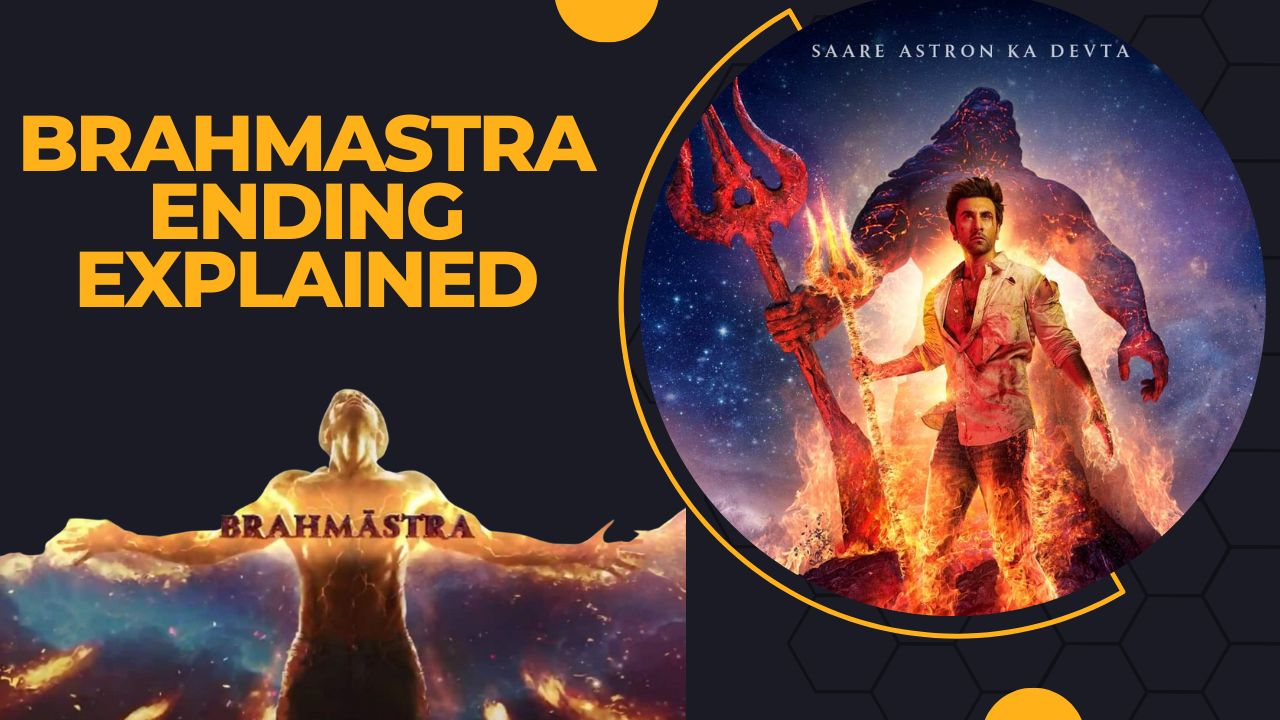 Brahmastra just made its release today, and there are mixed responses from the audience. And this is normal for any movie to go through as it was made with a budget and patience, and the audience started building their imagination around it. The part 1 Shiva of the trilogy series was released, and the movie went excellent. Various instances bring curiosity to the mind of the viewer.

Let’s jump straight into the ending explained by Brahmastra and understand what the movie was and what we can expect in part 2,” Dev.”

Brahmastra started with a bang as Shahrukh Khan was the first face that we see. He possesses the incredible power of Vanar, or “monkey.” Shahrukh khan played the role of scientist, and Moni Roy was the villain who wanted to grasp all three pieces of Brahmastra to awaken her supreme Deva, to whom she is devoted.

She successfully captures the first piece and also the vanarastra from the scientist. Later, we see Shiva, a devotee of Ma Durga and a DJ by profession, living in Mumbai. While performing a show, he falls in love with a girl whose role is being played by Alia Bhatt. Shiva does not know what power he has and is just a regular guy. Although sometimes he envisions people who have astras. When the scientist was killed, he saw everything happening in a dream. The next day he expected something similar, but this time, this was another person. While researching who he was, Shiva discovers that the person is a famous Artist.

Also Read: Who Is Amrita In Brahmastra? Shocking Revelations Made In The Movie! Who Will Play The Part?

He starts his journey to protect Aneesh Shetty from the witch on her quest to capture the three pieces of Brahmastra. He manages to save him but is followed by the witch while they escape GURU Ji, who is the master of all. Brahmasamaj is a group of people who possess different kinds of Astra and are also the savior of Brahmastra.

Brahmastra has the power to create and destroy and is the mightiest power of all. While the escape is shown, Aneesh Shetty, who possesses the power of 1000 nandi or bull, comes to a clash with the witch and get’s shot several times. Later, when Shiva fights Zor while he attacks his lover, he unleashes incredible strength that destroys the Vanar Astra Guy in a single blow.

He meets Guru Ji and learns about the mystical community around him. Guruji asks him to stay and learn more about his powers, but he denies it as he doesn’t want to know about magic and other things and only wants to live a life like a regular guy. But as soon as he turns around, Guruji tells him that he knows who his parents are and will only speak when he starts learning about his powers. He agrees to this and starts focusing on his powers and comes to learn a few fireball tricks, but he could make fire without a spark around him.

Meanwhile, her lover Alia Bhatt travels back to Mumbai to bring all her things and is attacked by zor, who engulfed the nandiastra after killing Aneesh Shetty. She survives somehow as two fellow members of the Brahman accompany her. When she returns, Mouni Roy, a follower of Dev who wants to grab the Brahmastra, attacks the place where the Brahman resides. She manipulates people around the village with an amulet with the powers of Agniastra, leading them to attack Brahma. During the fight, she gets hold of all three pieces of the Brahmastra and rejoins them.

Brahmastra’s three pieces re-unite, and there is a strong force that falls on the earth, destroying everything. But Shiva manages to stop the party, saving everyone from the immense catastrophe.

Also Read: Why Can Shiva See All The Astras In Brahmastra? Does He Have Any Special Abilities?

And the end scene shows Dev breaking himself from the statue and returning to life. In the Next part, we will watch A fearsome battle between the Son and the father, i.e., Deva. Moreover, Shiva’s Mother, Amrita, will come back in the second part, and there will be other characters with new powers in part 2. As far as we know, Part 2, Titled Dev, will have some characters dead, just as in part 1, Shiva. Moreover, we might also get to see Alia Bhatt Gaining some mystical Astra powers.

1. Will Alia Bhatt Have Any Powers In Part 2?

Guruji tells Shiva that Amrita and Dev are his parents. Amrita broke Brahmastra into three pieces to save the world from Dev. The island on which the war happened desolated into the sea. Guruji mentioned that day both your parents died. But Dev was still alive in a statue, and Amrita gave Shiva birth and was burnt. But is she alive? There are low chances that she is alive as she was burnt in her home, and the movie showed that. But we will see Amrita’s back story in part 2.

The last what we saw was Shiva trying to control the enormous power of Dev and Brahmastra to save the world from ending. Finally, he succeeds in controlling Dev’s power. But we also saw Dev breaking from the statue, and the film ended. So, did he acquire Brahmastra? That is what we saw. The broken pieces were joined together, which means Brahmastra was again back to life but did Shiva’s power control it? Or has Dev acquired it? We will know when the next part comes!

Till now, no Announcements have been made regarding part 2, but we expect it to release by 2024. Part 2 is named Dev and will depict the battle between Shiva and Dev as they both have firepower. Deepika Padukone will make her appearance as Amrita. Dev and Amrita are the parents of Shiva. New Astra’s will also be revealed in part 2 of the film!

Also Read: Which Astra Is Most Powerful In Brahmastra? Shiva Posses A Special Power!