What’s a better way to spend your boring evening than with a pizza and a horror TV series? If you are a horror buff, then Chucky is a must of must-watch TV series. Based on characters created by Don Mancini for the Child’s Play franchise, Chucky is an American horror TV series produced by Mitch Engel and Mallory Westfall. The TV show Chucky is a sequel to Cult of Chucky, the 7th movie of the Child’s Play franchise. The plot of the series follows the events after the last movie with Brad Dourif reprising as the titular character’s voice.

The TV show Chucky contains a total of eight episodes starring Zackary Arthur, Alyvia Alyn Lind, Brad Dourif, Björgvin Arnarson, and Teo Briones. Fiona Dourif, Christine Elise McCarthy, Alex Vincent, and Jennifer Tilly also return for their previous roles from the original films. The series is distributed by Syfy and USA Network. The show has a rating of 7.4/10 on IMDb and a 91% approval rating on Rotten Tomatoes. The first episode of Season 1 of Chucky was released on 12th October 2021 and concluded on 30th November 2021.

Right after the first season of Chucky concluded on 30th November 2021, it was immediately renewed for a second season. However, Chucky Season 2 release date is yet to be announced. The date can be expected later in 2022 but that totally depends on the completion of filming and production of the episodes.

The exact date for the release of the second season is not yet confirmed. But fans can rest assured because there will be another season very soon. Since Chucky is a horror TV show, one can expect the release date no later than October. It is also confirmed that the main cast members will be returning for the upcoming season.

ALSO READ: IS MY BEST FRIEND ANNE FRANK BASED ON A TRUE STORY?

The climax of season 1 had a lot of loose ends and storylines. But it is still unclear whether the upcoming season of Chucky will pick up from where it left off or will it be a completely different story. It can be predicted that the evil doll will once again return with its murderous tendencies. The slaughtering and chaos will definitely increase.

In the finale of Season 1, Jake, Lexy, and Devon were shown to stand beside Junior’s grave. They were looked at by an unknown figure. Therefore, season 2 may also reveal who that figure was. Zackary Arthur, Alyvia Alyn Lind, Brad Dourif, Björgvin Arnarson, and Teo Briones will be continuing with their characters. Fans may also come across new characters in Chucky Season 2.

The filming of Chucky Season 1 was set to start in the year 2020 but got delayed due to the ongoing pandemic. It finally began in Toronto, Ontario on 29th March 2021, and ended on 11th August 2021. The plot revolves around events that take place four years after the movie Cult of Chucky. Jake Wheeler, a 14-year-old schoolboy, buys a doll from a yard sale. Later, he finds out that the doll is possessed by an evil spirit of a serial killer called Charles Lee Ray.

The doll, known as Chucky, commits a series of homicides, and as a result that Jake becomes a suspect for the crimes. He also goes through bullying in school and faces issues for being gay. The doll takes advantage of it and manipulates Jake to also commit crimes. Simultaneously, flashback scenes are also shown following the childhood of Charles Lee Ray. Now it is up to Jake and his friends to end the gruesome murders by disposing of the doll.

The ensemble cast members include Zackary Arthur as Jake Wheeler, Brad Dourif as the voice of Chucky/Charles Lee Ray, Alyvia Alyn Lind as Lexy Cross, Björgvin Arnarson as Devon Evans, and Teo Briones as Junior Wheeler. In the flashback scenes of Chucky’s childhood, the character is played by Tyler Barish and David Kohlsmith. 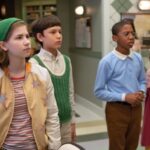