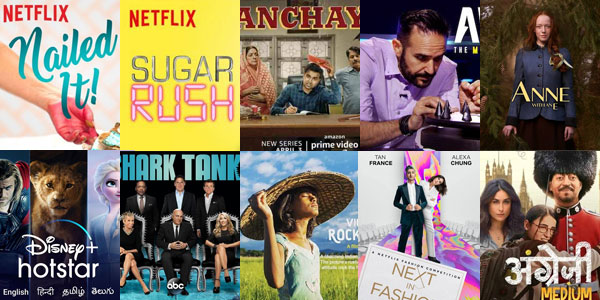 Indian shows, though revolve around the same story genre, sometimes came up with something different and out of the lead. One of the Netflix released series on January 14, 2022, is also the same. Directed by Siddharth Sengupta, Rohit Jugraj, Ankkitha Maithy, and Varun Badola, ” Yeh Kali Kali Aankhen ” best describes an Indian daily soap opera-like series. Revolving around the dangerous love triangle among Vikrant, Shikha, and Purva, the series is set in Onkara, a town situated near the banks of Ganga.

The crime in such a lawless scenario heads up to the entire town, which brings a war among many. Vikrant wants to live a happy and satisfied life with Shikha, but their life and love bring a halt when Purva, the daughter of a politician of the town fell into in one – side love with Vikrant. The deadly battle starts from here, changing everyone’s life. In today’s article, I am going to share some series just like Yeh Kali Kali Aankhen, which will be best suited for your weekend, as it is near, and you will get something to binge on.

Created by Shailendra Kumar Jha and directed by Ranjan Chandel, Grahan is based on the book ” Chaurasi ” by Satya Vyas. It is a crime-based drama streaming web series that was released on Hotstar on June 24, 2021. The series have Pawan Malhotra, Zoya Hussain, Anshumaan Pushkar and Wamiqa Gabbi in the mains. The series revolves around Amrita Singh, an IPS officer who resigns from her post due to political interference, and decided to marry her boyfriend in Canada. But soon, she gets to know that her father Gursevak Singh, a Sikh himself, is a prime accused of the 1984 anti – Sikh riots in Bokaro, Jharkhand.

She then decides to unravel and reached the truth, for which her investigation went from trust, betrayal, and love. Many hidden and disastrous truths opened up slowly before everything, and the same similarities and the situations presented at the social and the political level. Watch this amazing series, and see how this is portrayed other than the book. You can watch the trailer first.

Released on November 18, 2021, this epic ” Matsya Kaand ” is all about crime and thrillers, which any fan wants. Ravi Dubey, Piyush Mishra, Ravi Kishan, Zoya Afroz, and Rajesh Sharma are shown in the main roles. Ravi Dubey, as always, portrayed the role of Matya Thada, a con artist, very well and beautifully. He is a con cop, executing every situation and case by some sort of ” kaand ” ( scam ), as the title suggests. He was mastered by Anand Pandit, his guruji during his time in the jail, and later on, appointed by ACP Tejraj Singh. Add this to your wishlist for your weekend.

Premiered on SonyLIV on May 28, 2021, ” Maharani ” is created by Subhash Kapoor and directed by Karan Sharma. Actors include Huma Qureshi along with Sohum Shah, Amit Sial, Kani Kusruti, and Inaamulhaq. It got a good response from the fans, and everyone admires and appreciates Human’s work and her role. The story is set in 1990 and revolves around Rani Bharti who is a simple homemaker and the wife of Bheema, CM of Bihar. She wants to go to her village but was halted when Bheema announced her as his next successor when everyone else was very much excited to hear the name of the next successor. Watch this Indian political drama and enjoy your weekend.

The next series in our list is ” The Final Call “, which is based on the 2015 novel ” I Will Go with You ” by Priya Kumar. Directed by Vijay Lalwani, the series stars Arjun Rampal, Neeraj Kabi, Sakshi Tanwar, Harshad Arora‚ Anupriya Goenka, Javed Jaffrey, Paula McGlynn, Anshuman Malhotra, and Vipin Sharma. The series premiered on the online streaming platform ZEE5 on February 22, 2019. The plot of the series revolves around the life of 300 passengers, who are traveling from Mumbai to Sydney.

Karan Sachdeva is the Captain Commander of a commercial flight and decides to suicide on board by taking poison. During his time in the Indian Air Force as a Wing Commander, he was owned with the innocent blood on his hands, and later on, the death of his wife and kids in a car accident added up to his grief, which ultimately brings him to end his life. But unfortunately, things get changed after the death of his co-pilot and stand-by the pilot. Will he change his mind and save all the passengers, giving up his thought of suicide? You have to watch this amazing series for this.

This one is one of my favorites, as I personally liked this romantic, thriller drama series a lot. The series is directed by Faruk Kabir, and is based on the novels written by Novoneel Chakraborty & Croctales. Beautifully written and then adapted into a series, it focuses around Rivanah Banerjee, A. K. A Mini, a young, talented and beautiful 22 – year – old girl who is a software engineer and shifted from Kolkata to Mumbai. She soon notices that she is being stalked by a voiceless, faceless and a nameless person, which later on comes to be her friend who urges her to ” Know Her Worth “. But, everything comes at a cost, as their obsession brings her to a dangerous path, risking others life too, including hers. You will definitely love this duo genre series, but don’t forget to thank me later.

Produced by Deepak Mukut Bejoy Nambiar and Nishant Pitti and directed by Bejoy Nambiar, Taish is a Hindi drama film and a series that stars Pulkit Samrat, Kriti Kharbanda, Jim Sarbh, Sanjeeda Shaikh, and Harshvardhan Rane. It was released on October 29, 2020, on the ZEE5 network. The plot has two interlinked strands which are set in the UK. In the first stand, we see Rohan Kalra and Sunny Lalwani, who arrived in the UK to celebrate the wedding ceremony of Krish, the younger brother of the former. While the second strand shows us the two gangster brothers Kukjinder and Pali Brar. The latter one is having an affair with the wife of the former one, and the two brothers also arrived at the ceremony. It shows us how a single deed resulted in a set of chains of extreme and dangerous calamity for the two groups. Watch the trailer first before heading up for the series.

Arunoday Singh has once again shocked us, everyone, with his embarking acting skills and looks in this thriller drama series- ” Apharan “. Along with Mahie Gill, Monica Chaudhary, Nidhi Singh, Varun Badola, and Saanand Verma, ” Apharan ” is created by Jishan and directed and co-produced by Sidharth Sengupta. It takes us into the 70s era and the story has the story of kidnapping, murder, and crime. It revolves around the Uttarakhand police inspector Rudra Srivastava, who kidnapped a girl Anusha at her mother’s request. He was falsely accused and ends up in jail for 3 years. The plot then turns to the murder of the kidnapped girl. Watch his amazing acting and the mystery behind the murder.

MUST-READ: Top 10 Movies Like Pushpa That Are Really Interesting!

Directed by Anurag Kashyap, Vikramaditya Motwane along Neeraj Ghaywan, ” Sacred Games ” is a thriller and a mysterious web series revolving around Sartaj Singh, a police officer. He investigates the case of the suicide of a gangster Ganesh Gaitonde, with his last words were pointing something dangerous will happen in Mumbai. He soon discovers that it is dirty politics and many persons including politicians, DCP, and an actress are involved in his suicide case. His father was also connected with him, though for some right reasons. Watch this political scandal series on Netflix now.

Directed by Akshay Choubey for the OTT platform ALT Balaji and ZEE5, ” Code M ” is a crime thriller web series that casts Jennifer Winget, Tanuj Virwani, Keshav Sadhna, Meghna Kaushik along with Seema Biswas in the lead roles. The story revolves around the murder mystery of two terrorists and an army officer. Although, it is an open and shut case, but involves many mysteries behind the murder. Monika Mehra, an army officer, along with her ex Angad Sadhu, who is also a legal counsel investigate the case to reach to unveil the truth. If you are a lover of Jennifer Winget, see how she has drawn an army officer role so beautifully. Watch the trailer here.

This series is one of the finest and most satisfying web series on our list. Starred with Mohit Raina, Sunny Hinduja, Bidita bag, Gulki Joshi, Abhimanyu Singh, Siddhant Kapoor, and Rashmi Rajpoot, the series is directed by Jatin Satish for the OTT platform MX player. The series revolves around Naveen Sikhera, SSP who is transferred to the crime city, Muzzafer Nagar. He wants to remove all the crime and the gangsters in the city. Will he be able to do this? You have to watch this series for that. Just watch it and you will enjoy it a lot.

ALSO READ: Top 10 Shows Like Friends From College That Are Must Watch!