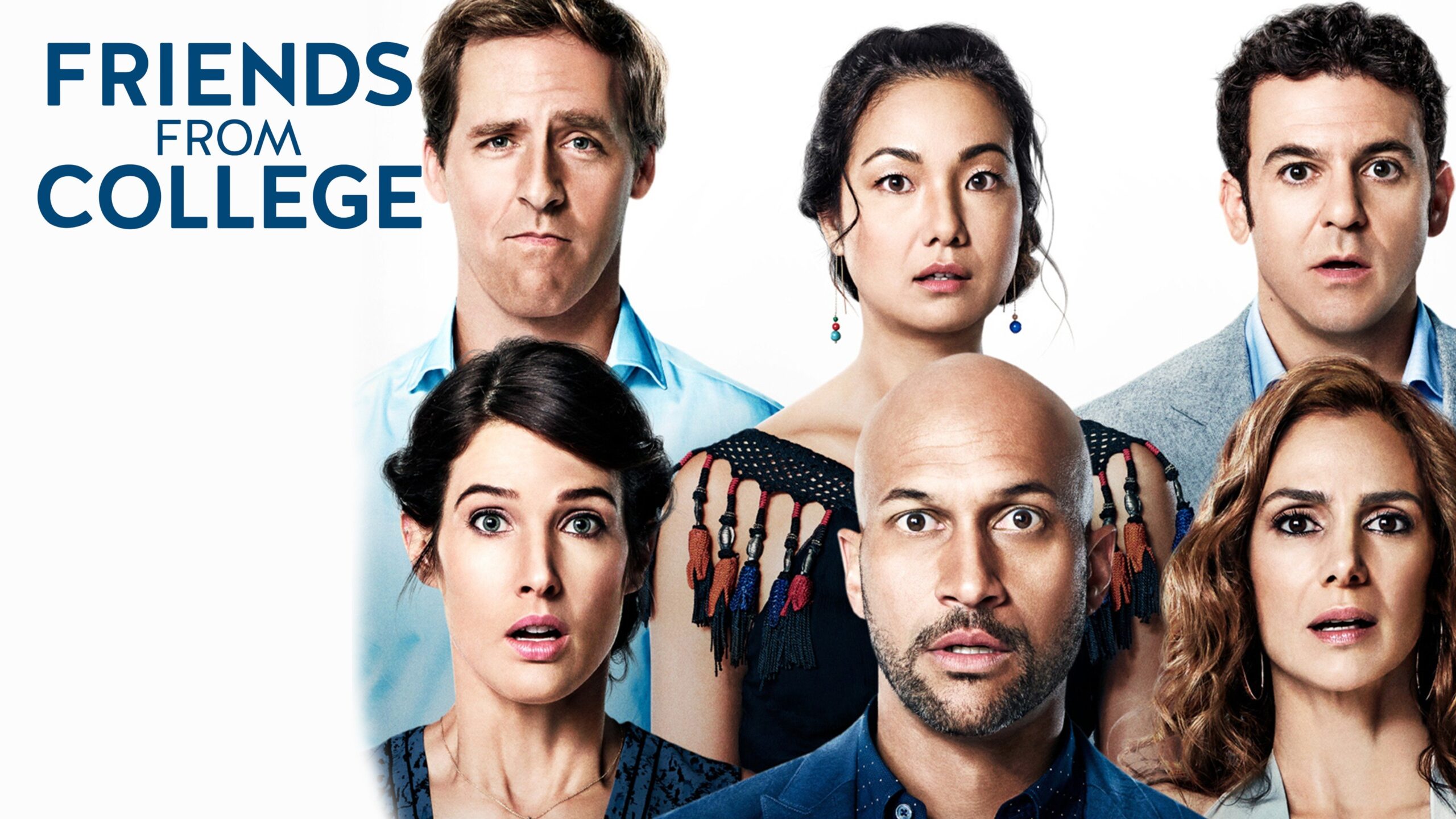 “Friends from College” is a comedy series of United States’ television service. The second season of eight episodes was ordered by Netflix for the series on January 11, 2019. The series premiered on Netflix on July 14, 2017, with its first season consisting of eight half-hour episodes, Netflix renewed the series for a third season on August 21, 2017. This series got canceled on February 18, 2019.

This comedy-drama was created by Francesca Delbanco and Nicholas Stoller, with a cast like Keegan-Michael Key, Fred Savage, Annie Parisse, Nat Faxon, and Jae Suh Park. As of now, they have 2 seasons which were released with 8 episodes in each season, by mean that, there are 16 episodes in total.

An irreverent series that reveals the clumsy and romantically intertwined lives of a group of Harvard alumni in their 40s. The series depicts their tragicomic misadventure as they navigate New York City’s glamour and hardship.

As the series grows popular and people love the show, we are here to give you 10 more shows you would love if you love “Friends from College”.

The series follows the story of two characters, Mickey and Gus.  In this story, Mickey and Gus are two untrustworthy characters with significant emotional baggage, trying to establish a trusting relationship; Mickey has been an alcoholic, a lover, a pot-stirrer, and is dishonest with herself and others. On the other hand, Gus is just feeling awkward, emotionally needy, oblivious to social cues, and prone to occasional outbursts as things are not going his way.

If you like Sitcom comedy, we would like to share “Great News”, it is an American Television Sitcom series, which was written and created by Tracey Wigfield. This series was premiered on NBC on April 25, 2017. On 11th May 2017, NBC renewed the series for its second season. The second season was premiered on May 11, 2018, which is also the last season as on May 11, 2018, after the release of the second season, the series got canceled. With a total of 2 seasons, this sitcom has 23 episodes in total which are 20-22 minutes long.

Dead to me is a Dark comedy series of America’s streaming and television service. This series premiered on Netflix on May 3, 2019, and starred Christina Applegate and Linda Cardellini as grieving women who bond during therapy. The first season was well-received, and Netflix renewed the series for a second season on the 8th of May, 2020. The series’ actress “Applegate” was received a nomination in the category of Outstanding Lead Actress in a Comedy Series at the 71st Primetime Emmy Awards. This show has received 4 nominations at 72nd Primetime Emmy Awards, including the Outstanding Comedy Series, and 3 nominations in Outstanding Comedy Actress.

NEXT-READ: 8 Shows Like All Of Us Are Dead That One Must Watch!

Champions is an American comedy series, which was premiered on NBC on March 8, 2018. This series is created by Charlie Grandy and Mindy Kaling. As of now, this series only has its first season with 10 episodes in it, each episode is just 20-21 minutes long, so it’ll not going to bore you. On June 29, 2018, NBC canceled the series. So, it has only one season.

The story of this series follows the life of a character named Vince, a charismatic gym owner from Brooklyn, New York, who lives every bachelor’s dream with his brother Matthew in a simple apartment. He dates a lot of women until his high school fling Priya drops off their 15 years old son, Michael.

Now in this list, this Tv show is quite different and funny and loving. I mean Paul Rudd did an excellent job in this American Comedy-Drama series. This series was created by Timothy Greenberg and premiered on October 18, 2019.

Living with Yourself follows the story of a man, who discovers that his cloned self has replaced him after undergoing a mysterious procedure that promises him a better life. Let me tell you something, this series is not limited to that. When his wife finds out this series takes a pace in comedy. It’s a perfect movie to watch with your friends or family on a boring weekend night.

After the release, this series is neither updated nor canceled by Netflix, however, it’s been almost 3 years already, people are assuming that the series might not come for another season. But anything can happen, until that, you got 10 exciting episodes of Living with Yourself to enjoy.

Easy is an American comedy-drama series that was written, directed, edited, and produced by Joe Swanberg. On September 22, 2016, Netflix released the first season of the series. In April 2017, Swanberg announced the series had been renewed for a second season, which shipped on December 1, 2017. In August 2018, Swanberg announced the show would return for a final season on May 10, 2019.

It was created by Jonathan Gavin and Imogen Banks for Network Ten and produced by Imogen Banks and Nicole O’Donahue for Netflix. It premiered on Netflix in September 2018. In Sisters, Julia Bechly is taken on a journey of discovery when her father, Julius Bechly, a pioneer of in vitro fertilization, publishes a deathbed confession from his illustration career as a fertility specialist. She throws a family gathering to make the most of her situation, but only discovers that she has two sisters: troubled children’s TV star Roxy Karibas and belligerent lawyer Edie Flanagan. This series got released on 25th October and ended on 6th December 2017.

ALSO READ: 10 Shows Like Billions That Are Must Watch For The Fans!

Flaked is comedy-drama series of America, which was released for television and streaming service “Netflix”. As of now, this series got 2 seasons with a total of 14 episodes. The first season of the series consisted of eight episodes and debuted on Netflix on March 11, 2016. The show was renewed in July 2016 for the second season of six episodes, which premiered on June 2, 2017.

Exasperating exploration of stunted white male adulthood”, wrote Mary McNamara for the Los Angeles Times. The second season received more favorable reviews. IGN found that it “Proved to be a stronger, more focused series in its second season, even if it didn’t improve on all the faults of its first”.  This series is created by Will Arnett and Mark Chappell. Will Arnett, Mark Chappell, Ben Silverman, Peter Principato are the executive producers of this television and streaming show.

The Good Cop is an American television and streaming show that was premiered on Netflix. It is a Comedy-Drama Murder mystery type of show that was created by Andy Breckman. It’s a 10-episode series on Netflix, premiered on September 21, 2018. On November 13, 2018, this series got canceled by Netflix after its fair playing first season.

This series is based on the book “The Good Cop” by Erez Aviram and created for television by Andy Breckman. In Its first season, the series got 10 episodes, and each episode of this series is 40 to 45 minutes long. This show is based on an Israeli television show which was created by the book author both of the series are based on “Tomer Aviram” alongside “Erez”.

So, here we are, with top 10 shows like “Friends from College”. Check out all the shows because entertainment is needy.