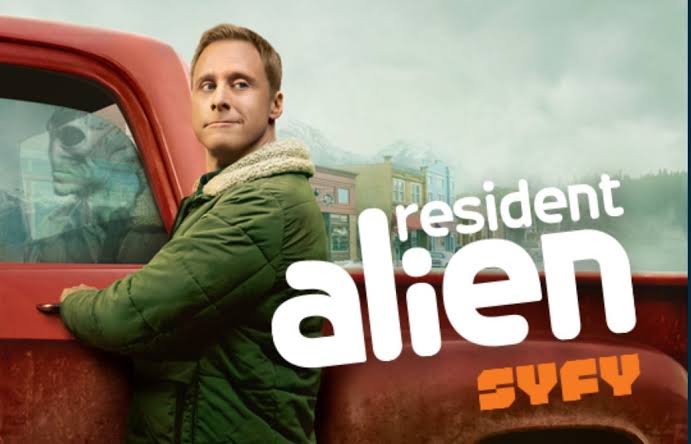 A good laugh with a touch of science fiction is sometimes the best combination we can ever get. Resident Alien is one of those mixed-genres shows that has gained popularity since the first season itself. The TV series is based on an American comic book series called Resident Alien, written by Steve Parkhouse and Peter Hogan. On 28th February 2019, a TV series adaptation was announced. The comedy-drama is created by Chris Sheridan and its first season aired on Syfy on 27th January 2021.

It was announced in March 2021 that there will be a second season of Resident Alien. This season is set to air on 26th January 2022 on Syfy. The main character of Resident Alien is played by Alan Tudyk. The filming is done in Vancouver, Canada. Shannon Kohli, Robert Duncan McNeill, David Dobkin, Jay Chandrasekhar, and Jennifer Phang have directed the first season’s episodes. The show has a rating of 8.4/10 on IMDb and a 94% approval rating on Rotten Tomatoes.

With the pilot episode of the second season set to premiere soon, fans are eager to know about the schedule for further episodes. The production has released a schedule for the first five episodes for Resident Alien Season 2. According to that Resident Alien Season 2 Episode 4 will air on 16th February 2022. The title of the episode is “Radio Harry”.

However, the plot of Episode 4 is still unclear and will remain so until the release of the previous episodes. Along with that, it is also unclear how many episodes this season will have. Expectations are that there will be 10 episodes like in season 1 but one can never be sure. Fans will have to wait for any further updates beyond the fifth episode’s schedule.

Hah Re, an alien biologist crash lands on earth and develops human skills and hobbies for a year before acquiring the identity of Dr. Harry Vanderspeigle, a retired pathology physician. He then buys a cabin in Patience, Washington, and resides there. When the town’s local doctor is mysteriously murdered, alien Dr. Harry is asked to do the autopsy. Since he has the ability to detect human emotions and lies, he also helps to identify the murderer. The murderer gets unsettled by the developments and tries to attack alien Dr. Harry.

Things get even more difficult for him when a nine-year-old boy, Max Hawthorne starts to see his true alien form and the green glow from his alien technology. Later on, the murdered doctor’s assistant, Asta Twelvetrees also finds out Harry’s secret. She is the first adult in town to do so. Meanwhile, the other residents of Patience start getting closer to the truth one by one. The alien doctor also worries about his true mission on Earth, which is to destroy humanity.

Where To Watch Resident Alien Season 2?

Season 2 of Resident Alien is set to air on Syfy. Viewers can also catch up with the previous episodes on the Syfy App. The episodes are also available on Amazon Prime Video, fuboTV, VUDU, Google Play, iTunes, Amazon Instant Video, and Spectrum TV.

The lead role of Resident Alien is played by Alan Tudyk. He is an alien under the identity of Dr. Harry Vanderspeigle. The other members of the ensemble cast include Sara Tomko as Asta Twelvetrees, Alice Wetterlund as D’Arcy Bloom, Judah Prehn as Max Hawthorne, Levi Fiehler as Ben Hawthorne, and Corey Reynolds as Mike Thompson.

The list of executive producers includes Mike Richardson, Chris Sheridan, Keith Goldberg, Darryl Frank, and Justin Falvey. David Dobkin produced only the pilot episode whereas the rest of the episodes were produced by Robert Duncan McNeill.

ALSO READ: Is Amandla Based On A True Story? Know Here!