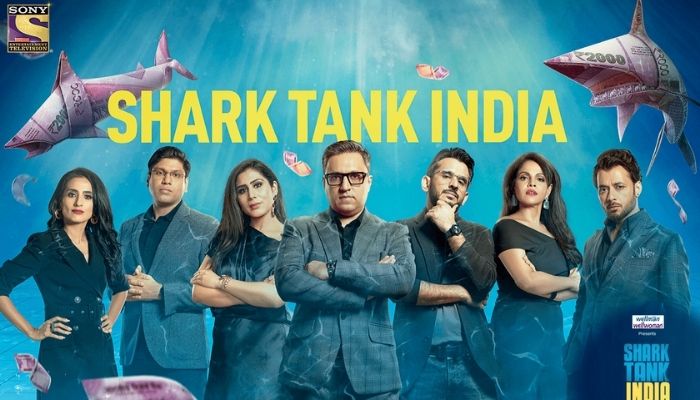 Shark tank India is the new Indian reality show based on the business and investor sector of the economy. The show is based on the theme, where small entrepreneurial minds with small companies of their own and with big dreams, don’t have proper financial support for their dreams, they present their ideas in front of the” sharks” or investors as we can say and if the sharks love their idea, they are willing to invest in their business. The show started premiering on the SonyLIV channel and since the day it premiered on 20th December 2021 and has been a great hit with great hype among the viewers. We already have seen this kind of show abroad but not in the Indian market and thus the makers were able to take upon the opportunity.

The name of sharks who star in the show is Ashneer Grover, Aman Gupta, Anuman Mittal, Ghazal Alagh, Namita Thapar, Piyush Bansal, and Vineeta Singh. The show has already handled more than 50 great ideas and invested in many, with only 25 episodes in hand. The show is actually a franchise of the American show shark tank. Each of the episodes of the show has a run time of nearly 25 minutes. The show has already received a great word from the critics and has secured an 8.4 IMDb rating which is great, to be honest.

Some of the other shows which are very alike to shark tank India are listed below:

The American tv series shark tank actually gave inspiration to the makers of the show and made them realize that the Indian market lacks a show like this. The American show is a complete duplicate of the Indian version just with other sharks in the tank. Though the American version has run for a long time since the year 2009 and altogether with 13 episodes in hand which is incredible, the show secured a 7.6 IMDb rating which is great too for the time frame it has been running and still having the same fan base

Dragon’s Den is another reality show but with a British origin, the show was actually the first one to have the idea of presenting the investor market in front of the entire world. this show inspired a lot of entrepreneurs’ minds for sure. The show has an IMDb rating of 6.8 and has been running since the year 2005. It still maintains a great fanbase, the show is still running and is on its 19th season. The show started premiering on BBC Two at first but in 2021 the show was moved to BBC One and is currently running on that channel.

Million-pound menu is also a reality show on the BBC network and is just the restaurant version of the show shark tank. The main story is where small minds with great ideas about their restaurants present them in front of the investors and if they think the idea will end up being a great opportunity, they invest and build a new restaurant owner. The show has secured an IMDb rating of nearly 6.7 out of 10 and it has been running for two consecutive seasons since the year 2018. The show currently does not have a season 3 in hand but we can soon expect it.

That’s another American tv reality show that we have got in hand and is near of the same type, though there is only one shark in it as we can say or one investor, his name is Tillman Fertitta, the CEO, and owner of Landry’s Inc, Fertitta travels all around the country trying new and innovative hospitality products and if the small business owners can impress the elephant of the room, then they get to partner with Landry’s inc. the show has already got 3 seasons and has been running since 2016 and it has also secured a big 7.6 as an IMDB rating. The show streams on the channel CNBC.

5. Make Me A Millionaire Inventor

This is also an American tv reality series and is often considered the reboot of the idea of the shark tanks as the complete idea of the show is the same just a bit less flashy than it is shown in shark tanks, another difference is that shark tank promotes all kind of ideas but the hosts of this show are mainly engineers looking for new inventions. The show has got a good review from the viewers along with an 8.3 IMDb rating which is actually great. It has already been running for two seasons during the years 2015 and 2016, after that the show hasn’t been continued for the third season but it surely is a lot talked about. The viewers can surely check out this show to see whether it is up to the mark of shark tanks and will it be able to give it a hard time?

Now we come to another very talked-about show, that has got a great fan base, and can be considered a good competitor with shark tanks. It is also a reality tv show but in a documentary style. The show broadcasts on CNBC and has been running for 8 seasons the 9th season is supposed to be out in 2022. The show revolves around the story where Marcus Anthony Lemonis offers an investment into the small struggling businesses and owns a part of them. It has secured a great 8.4 IMDb rating which is quite impressive and it has also got a spinoff series related to it named the partners.

We also have all the international versions of the shark tank in our hands among which the Australian version is a great hit. It had continued for 4 seasons altogether which premiered in the year 2015 till 2018, we haven’t received any renewal about that show yet. The show secured an IMDb rating of nearly 6.6 which is moderate when it comes to the shark tank series. The show was premiered on network ten and it was filmed in Fox Studios Australia.

Kitchen Nightmares is a show starring the celebrity, “quite talked about” and scary chef Gordon Ramsay. the show has been a great hit among the viewers and has secured a 7.5 IMDb rating which is remarkable in its way. The show is a bit different from shark tanks, here the celebrity chef visits restaurants that are running on loss or are completely doomed according to their owners and, Ramsay tries the food there, finds out what’s wrong with the place, and brings the necessary changes, we also see Ramsay bringing in his squad of interior designers and changing the entire getup of the place and many more such things. The show has been running for about 7 seasons and was discontinued in the year 2014.

This is another series that doesn’t belong to the reality tv shows genre but a fictional drama series. But the story setting quite belongs to the same market and has been running for a total of 5 seasons which surely depicts the kind of fanbase it holds. The story is about a hedge fund manager Bobby Axelrod as he goes around accumulating wealth in the financial world. The show got an 8.4 IMDb and the audience is expecting a new season soon from the makers.

AT THE TOP: 10 Series Like No Good Nick That You Must Not Miss!

It is another reality tv series starring the celebrity chef Gordon Ramsay, and this time he isn’t out there checking up on restaurants but mostly on hotels, checking their accommodation facility, room service, and mainly food service. Every change that is needed in the hotel is taken care of by Gordon along with the mentality changing of the owners. The show has got a 7.1 IMDb rating and also got a great fanbase. The show has been running for 3 seasons and last premiered in the year 2016. A close relative to the show kitchen nightmares.

Another tv reality series falls under the same restaurant category or more appropriately bar category. The host of the show is Jon Traffer who sends his men in disguise to find out the faults in the failing bars. He then confronts the owners the staff and the faults there, bringing about many changes and bringing success to the failing bars. The show has been running for 8 seasons and has secured a 7.5 IMDb rating with a huge fanbase in hand.

We now come to an Indian fiction drama minis series, which depicts the other side of the investment market, the entrepreneurs, the risk they take, and how much struggle they face. The series has got a 9.1 IMDb rating which is huge, we have received only 1 season for the show and the audience surely wants more from the makers. The show has been a great inspiration for young minds and has given hope to many struggling startup ideas. A great show and surely worth a watch.

ALSO READ: Is Young Sheldon Based On True Story?