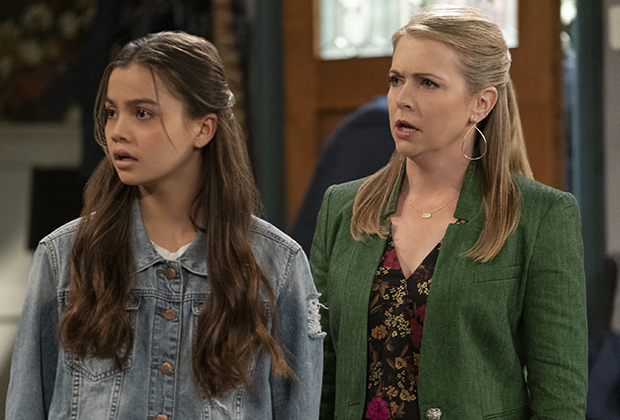 A show on Netflix, No Good Nick is an American comedy-drama series created by Keetgi Kogan and David H. Steinberg. The star cast of this series includes Siena Agudong, Kalama Epstein, Lauren Lindsey Donzis, Sean Astin, and Melissa Joan Hart. The first part of this series was released on Netflix on 15th April 2019 whereas the second part was released on 5th August 2019. After its first season, the show was canceled by the creators.

No Good Nick revolves around a 13-year-old teenager named Nicole “Nick” Franzelli. She lives with her dad, Tony who runs a restaurant business. After a rival business takes over their market, Tony finds it difficult to keep his business intact. As a desperate attempt, he robs a shop and gets caught by the police. As a result, Nick is put with corrupt foster parents Sam and Dorothy Harbaugh. They train her to be a con artist. If you’ve watched and like No Good Nick, then here are some similar shows that you should definitely watch.

Created and developed by Tracy Bitterolf and Pamela Eells O’Connell respectively, Team is an American sitcom streaming on Netflix. It is directed by Bob Koherr with Bryana Salaz and Alison Fernandez as the lead cast members. Other stars include Symera Jackson, Elie Samouhi, Kai Calhoun, and Eliza Pryor. The story revolves around Kaylie Konrad who is 19 years old. She is also a famous billionaire and celebrity but unfortunately gets into a car accident. Thereafter she is sentenced to serve one year of community service because of which she ends up leading a Wilderness Club at a middle school. There are a total of 20 episodes for this show.

Liv and Maddie is another American comedy TV series that was created by Ron Hart and John D. Beck. It first aired on Disney Channel from 19th July 2013 to 24th March 2017. The assembled cast of Liv and Maddie include Dove Cameron, Kali Rocha, Joey Bragg, Benjamin King, Tenzing Norgay Trainor, and Lauren Lindsey Donzis. The episodes follow day to day lives of two identical twins, Liv and Maddie. Liv is a former Hollywood celebrity who starred in a popular television series for four years. On the other hand, Maddie is her school team’s basketball captain and is exactly the opposite of her sister Liv.

Created by David Kendall and Bob Young, Melissa and Joey is an American TV sitcom series starring Melissa Joan Hart and Joey Lawrence in their lead roles. Other cast members include Taylor Spreitler, Nick Robinson, Lucy DeVito, and Elizabeth Ho. The series has four seasons that aired on ABC Family from 2010 to 2015. The story is about Mel who is one of the local politicians. During a family scandal, her niece and nephew, Lennox, and Ryder get separated from their parents. Mel takes them in and when she finds it difficult to balance her own life and family, she hires a male nanny called Joe.

Another comedy TV series, Jessie Was created by Pamela Eells O’Connell. It has a total of four seasons that aired on Disney Channel from 30th September 2011 to 16th October 2015. The show’s cast members include Debby Ryan, Cameron Boyce, Peyton List, Skai Jackson, Karan Brar, and Kevin Chamberlin. The show follows the life of Jessie, a young girl who moves to New York City to follow her dreams. She takes up a job as a nanny of a wealthy family, the Ross family. Whereupon, she encounters parents Morgan and Christina Ross and their four boisterous children: Luke, Ravi, Emma, and Zuri.

ALSO READ: IS HELL OR HIGH WATER BASED ON A TRUE STORY?

Andi Mack is an American comedy series consisting of three seasons. Created by Teri Minsky, the show aired on Disney Channel from 7th April 2017 to 26th July 2019. The assembled cast members include Peyton Elizabeth Lee, Lauren Tom, Sofia Wylie, Joshua Rush, Lilan Bowden, Asher Angel, and Trent Garrett. Andi Mack is a story about a thirteen years old girl who discovers on her 13th birthday that the person whom she considered to be her sister is actually her mom. She also meets her newfound father and tries to bond with both of them while juggling her school and friendships.

Based on a novel of the same name by Kirsten Smith, Trinkets is an American teen drama series on Netflix. It stars Brianna Hildebrand, Kiana Madeira, Brandon Butler, Quintessa Swindell, Linden Ashby, Larry Sullivan, Dana Green, Odiseas Georgiadis, and October Moore. It has two seasons and the first episode was released on 14th June 2019. The story revolves around Elodie Davis, Tabitha Foster, and Moe Truax who become friends after they find each other at an anonymous shoplifters meeting. They then help each other overcome their teen insecurities and deal with their family issues.

Champions is yet another American comedy TV series created by Mindy Kaling and Charlie Grandy. The show premiered on NBC on 8th March 2018. It was canceled by NBC on 29th June 2018. The series cast members include Anders Holm, Andy Favreau, Fortune Feimster, Mouzam Makkar, and Josie Totah. The plot follows Vince and his younger brother Matthew. Vince is a charming gym owner and both he and his brother are living the bachelor’s dream in Brooklyn, New York. However, their lives turn upside down when Vince’s high school flong Priya reveals that he has a 15-year-old son, Michael.

8. Sydney to the Max

Another one of Disney’s shows, Sydney to the Max is an American comedy TV series. It was created by Mark Reisman and has a total of three seasons. The first episode aired on Disney Channel on 25th January 2019. The cast members include Ruth Righi, Jackson Dollinger, Ava Kolker, Ian Reed Kesler, Christian J. Simon and Caroline Rhea. The story follows Sydney, a 12 years old girl who lives with her father Max and grandmother Judy. She navigates through life with her best friend Olive. Each of the episodes is divided into past and present where both Max and Sydney get into similar situations. The flashback scenes are set in 1992 following 12 years old Max and his best friend Leo.

A show on Netflix, Merry Happy Whatever is another American comedy series. It has one season of 8 episodes starring Dennis Quaid in the lead role. Other cast members are Bridgit Mendler, Adam Rose, Elizabeth Ho, Ashley Tisdale, Brent Morin, Siobhan Murphy, and Hayes MacArthur. It first premiered on Netflix on 28th November 2019. By April 2020, it was canceled by the show’s creator, Tucker Cawley. The story revolves around the cheerful time of Christmas focusing on the Quinn family struggling with different stresses of the holidays.

Set in San Francisco, That’s So Raven is an American sitcom. It originally aired on Disney Channel from 17th January 2003 to 10th November 2007. The series cast members include Raven-Symoné, Anneliese van der Pol, Orlando Brown, Kyle Massey, T’Keyah Crystal Keymáh, and Rondell Sheridan. The story follows a teenage girl named Raven Baxter who receives psychic abilities to see the future outcome when stuck in difficult situations. As she tries to prevent these visions from being true, she ends up creating comic situations for herself and her friends and family.

ALSO READ: WHEN ARE WE GETTING BLACK-ISH SEASON 8 EPISODE 1 RELEASE DATE?