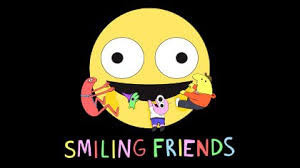 Animation is an ever-growing market. It is one of those forms of art that are loved by all ages. Be it your dad, granddad, or the kids. There’s a high probability that if an animation is on TV, you would want to sit and watch it. When animations are universally loved, it becomes inevitable that makers would want to try their hands at them. Every year we see new projects being started. One such project is Smiling Friends. About which we will be talking about today. If you are a fan of animation, keep on reading. And even if you are not a big fan, keep on reading because who knows you fall in love with it.

Smiling Friends is an animated TV series. The Australian-American adult series Zach Hadel and Michael Cusack. It is premiered on Cartoon Network under the block that overlooks nighttime programs called Adult Swim. For the uninitiated ones, the story revolves around a fictional company devoted to the task of making people smile. Whether or not the series manages to make viewers smile while watching it, you will know as you read.

The series is filled with surreal humor. It is a black comedy. Zach Hadel and Michael Cusack don the hats of both the writers and directors. Hadel and Cusack even co-star on the show. The show is being distributed under Warner Bros, Television Distribution. Princess Bento Studio is behind the spectacular animations.

MUST-READ: This Is Us Season 6: Is Toby Dead Or Alive?

The pilot episode of season 1 of the show was aired on April Fools Day. This was strategic as Adult Swim organizes an event every April Fools. The show was released as a part of that event. YOLO: Crystal Fantasy co-released with the show. YOLO is also created by Michael Cusack.

There was a huge wave of excitement amongst fans for the next season of the show. Adult Swim alongside the creators had announced on 19 May 2021 that greenlight had been given and the show was all set to premiere with its season 2 in the latter part of 2021.

During the Adult Swim festival in November, makers announced that the series would premier with a few months. The second season of the series premiered on 10th January this year. All the episodes were released at once. This was met with speculations as the initial plans were different.

The show revolves around a small company called Smiling Friends. The company has a motto which is to bring happiness to others. As the story progresses we follow the lives and adventures of the representatives of this company. Charlie and Pim is as different as chalk and cheese. Charlie is cynical. Pim is optimistic. Both are driven by the same aim. To help out the clients that approach them with their problems.

One finds themselves rooting for Charlie and Pim. It feels as if they are doing God’s work by trying to free people of their worries. Sometimes the problems shared by clients are complex. Yet the desire to help remains. The very idea that we are all driving each other home seems to be the essence of the show’s premise.