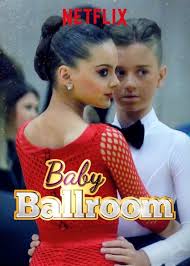 My earliest childhood memories are those where I am dancing my heart out on this song. There is something so endearing about little kids dancing. Their happiness and pure enthusiasm make it special. Perhaps, this is why kids dance reality TV shows and series are universally loved.

Baby Ballroom is one of these TV series. The English language series has its story centered around a dance school named The Zig Zag Dance Factory. The dance school is located in Wolverhampton England.

The Zig Zag Dance Factory is run by former ballroom dance champion couple Warren and Jane Bullock. The first season of this Firecracker Films and 5 Star produced dance reality TV series was released on 27 April 2017. The series has been streaming on Netflix, since. The series was also broadcast on Channel 5 for TV audiences.

Season 1 of the series has 15 episodes. The series has an IMDb rating of 7.7. Upon release, the series had mostly received positive feedback. Many critics appreciated how the makers did not choose the superficial way and instead chose to showcase the tough subjects.

Ever since season 2 ended, there has been a demand for season 3 amongst fans. Speculations have been rife that season 3 might release soon. However, fans are unsure because there were rumors around the show being canceled at the last minute.

MUST-READ: Is Tender Bar Based On A True Story? Find Out!

The series grapples with tough subjects like parental pressure with sensitivity. The makers go deep into the psyche of parents who turn their children into money-making machines.

The series showcases the lives of parents who have pushed their children into the overly competitive world of ballroom dancing. The dance teachers are ambitious enough to ensure victory. The parents are proud and the children are unaware of their exploitation.

The weird equations that draw in as the show progresses make for a fun watch. The triplets that the couple’s parents are a riot. Seeing the math-obsessed youngest triplet is funny. There are many other idiosyncrasies to the characters that make them relatable and fun.

The kid dancers are all in the age range of 6 to 17. They all seem to be passionate about dance. Ballroom dancing in particular. Their determination is such that they train religiously every day. There are weekly competitions organized to gauge their progress.

The saving grace of the show is the kids’ genuine passion. They all seem to be in it to win it. Of course, parental pressure exists. But the kids seem to be internally motivated, too.

The show stars Kim Hillyard, Jane Bullock, and Warren Bullock in pivotal roles. Each episode in the idiosyncrasies is 60 minutes long. Warren Bullock and Jane Bullock, the dance champion couple play themselves. Warren is a professional ballroom dancer and teacher who used to teach ballroom and Latin American dancing in schools. He has also starred in many other TV shows including Come Dancing, Doctors, United Kingdom Dance Championships, How To Live With Women, and Rumba in the Jungle. Two out of which aired on BBC.

Baby Ballroom: Inside The Glamour World

With popularity and competition come great responsibility and pressure. The downside of these reality TV series includes inculcating insecurities in children. Parents tan their children excessively for a few brownie points of ‘cuteness’. The makers and parents do not seem to realize that their fun of a few hours is damaging their children to an irreparable extent.

While watching the show, a pertinent question will arise in the minds of young parents. How far are they willing to go for the publicity of their children. Will you spend thousands and millions? Will you make your children go through extensive hard work at a ripe age? Will you risk their health for a few extra cents? Are you willing to prioritize these competitions over their education?

Tune into Netflix and watch Baby Ballroom and find how the parents in the show handle such things.

ALSO READ: Everything You Need To Know About My Secret Romance Season 2