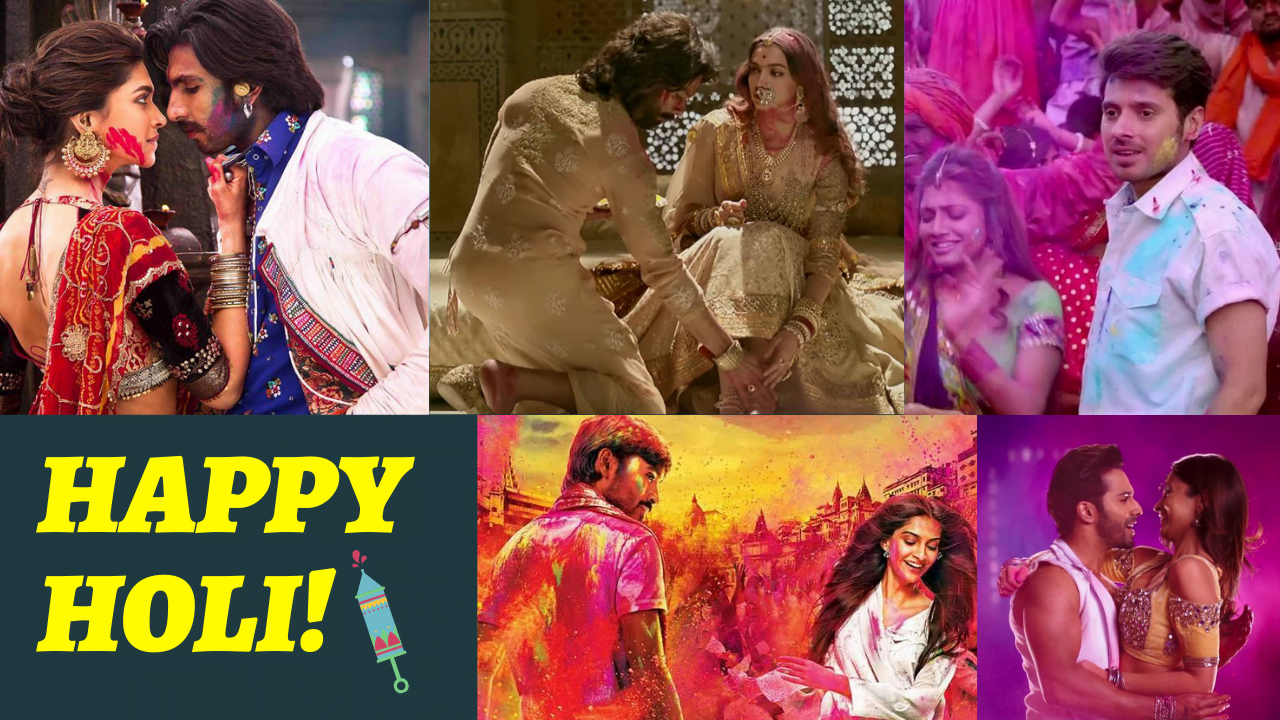 Holi, the festival of color. Celebrated all over India by putting Gulal on each other’s faces. People share sweets, dance with friends, and play with colors. Everybody enjoys to the fullest with love and happiness. Guests come to our houses, we meet with our relatives, eat together delicious foods on Holi. But at night when there is nothing to do everybody switches on their TV and searches for a good Film to watch on Holi. Here I have made a list of good films having the vibes of Holi and are good to watch on Holi. Many Indian films show the festival of color and have a great sense of vibes that entertain us. Here’s a list of Movies To Watch On Holi that you should totally read-

‘ Holi Ke Din Dil Khil Jate hai ‘ The most famous Holi song ever, is from the film Sholay. Sholay is one of the firms which has iconic scenes full of thrilling emotions. In this cult classic film, the climax appears while celebrating Holi, colors all over the place. When the Dream Girl, Hema Malini as Basanti comes and attracts the audience’s mind it all starts to make it worth watching on Holi.
Sholay directed by Ramesh Sippy starred by Amitabh Bachchan, Dharmendra, Jaya Bachchan, Hema Malini, Amjad Khan is an evergreen film that provides a new feel whenever we watch. This Holi sitting in the home is a good option for you to watch if you haven’t yet, even if you have you can go for a repeat.

‘Rang Barse Bheege Chunar Wali’ the most iconic Holi song, sung by Amitabh Bachchan is a must-to-play song on Holi at every Indian house, since the day it was released. It’s the song from the film ‘Silsila’ directed by Yash Chopra and featured by, Amitabh Bachchan, Rekha, Jaya Bachchan. Silsila is an Indian romantic drama film released in 1981, is a blockbuster and evergreen film that depicts the Silsila of Amitabh and Rekha’s love in the reel to real life. Then the Sacrifice of Amit’s love makes it an emotional love dramatic film. The most beautiful Holi scene in the film makes it worth watching on Holi. Even today it is a good film to watch on Holi.

Bollywood King, SRK performing the song ‘ Ang Se Ang Lagana, Sajan Hume Aise Rang Lagana’ on the occasion of Holi in the film Darr is known to everyone. The film stars Juhi Chawla, Shahrukh Khan, Sunny Deol, Tanvi Azmi, Anupam Kher, and Dalip Tahil. There is a piece of very important news to share whenever the film Darr comes in and that is, The budget of the film was just 32 million Rupees and in the Box Office, it earned 2.13 Billion Rupees. It has the craze over the audience with its outstanding making. The film directed and produced by Yash Chopra was released in 1993 and still today it’s not old enough to watch. For those who have not watched it yet, this Holi is the best day to watch this film.

The song which is having the Holi spirit within ‘ Hori khele Raghuveera’ sung by none other than Amitabh Bachhan is from the film Baghban. It is worth saying that one must not be left unaware of this film. Yet, this film must be mentioned in the list of films to watch on Holi. The film stars Amitabh Bachhan, Hema Malini, and Salman Khan was released in 2003. The title Baghban means ‘Gardener’. This film has a place in every Indian Cinema lover’s heart. This is famous for its story and guarantees to fill one’s eyes with tears. On this Holi and every Holi, this is a great option to watch.

The combination of Bollywood’s best stars, Amitabh Bachchan, Shahrukh Khan, and Aishwarya Rai Bachchan performs in the film Mohabbatien. It was released in 2000 before many of us took birth but then also it has fans from the newest generation. The film composes many love stories with all kinds of problems between their love. The very strict Principal, Narayan of Gurukul doesn’t believe in love and bans every student to love. Then comes the music teacher, Raj who believes to live with love even after one dies. He helps the students in loving and changes the mind of Mr.Narayan. It has many beautiful songs and one of them is ‘Soni Soni’ which has a very beautiful Holi vibe in it. This song and the performance in it make it a good film to watch on Holi.

6.Waqt: The race against time

The 2005 film Waqt: the race against time is included in the list of films to watch on Holi because of the very famous song, ‘Do me a favor let’s play Holi’. It is directed by Vipul Amrutlal Shah, stars Amitabh Bachhan, Akshay Kumar, and Priyanka Chopra. Can’t is blockbuster film. It took 160 million rupees to make the film which earned 450 million rupees in the box office. It’s a story about a wealthy man(Amitabh Bachhan) who kicks off his spoiled son ( Akshay Kumar) out of his house as he secretly married a girl ( Priyanka Chopra). The film shows the battle in every middle-class family in India. The Holi scene in this film is very enjoyable and it’s one the good films to watch on Holi.

Raanjhana is a tale of love between Zoya and Kundan. It has the consequences of different religions and a very successful film of 2013. The film stars Dhanush, Sonam K Ahuja, Swara Bhaskar, Bobby Deol, and Mohammed Zeeshan. It has a very iconic Holi celebration event with the song ‘Tum Tak’ which is aware almost to everyone. How Kundan (Dhanush) and his childhood love Zoya ( Sonam) being from different communities manages to love each other made it a hit film. It’s a good film to watch on Holi for those who haven’t watched it yet. Available on Prime Video

MUST-READ| Movies based on Indian history you will enjoy watching

Ranbeer Kapoor and Deepika Padukone along with Aditya Roy Kapoor and Kalki Koechlin starring in the Film Yeh Jawani hai Deewani directed by Ayan Mukerji has the famous Holi song ‘ Balam Pichkari’. When this song was released ( in 2013) it clouded its craze over everyone in India. Till then it is present in almost every Holi party’s playlist. This is a hit film in Indian cinema. Kabeer(Ranbir) and Naina (Deepika) meets on a trekking trip where Naina falls in love with Kabeer. But Kabeer lives in his dream world to make them true and runs towards his dream on a World Tour. They get separated and in the end, meets again at the wedding of their friend(Kalki). The song Balm Pichkari makes it worth watching on Holi. This is also a good films to watch on Holi.

Badrinath Ki Dulhaniya, starred by Varun Dhawan and Aliya Bhatt was released in 2017 is directed by Shashank Khetan. The song Badri ki Dulhaniya is set on Holi’s celebration and is very melodiously enjoyable. This provides a sense of Holi and can be considered as a good films to watch on Holi.

The State vs Jolly LLB is released in 2017 is a blockbuster film. Made with a budget of 45 crore Rupees collected 197 crore rupees in the box Office. The film stars Akshay Kumar, Huma Quraishi, and Saurabh Shukla and is directed by Subhash Kapoor. Coming to its story, undoubtedly it can be considered as a film with one of the greatest storylines all about the battle for Justice. The great performance given by Akshay Kumar and Sourabh makes it more wonderful. It has a song ‘Go Pagal’ which is a Holi celebration, Jagdish ( Akshay) celebrates with his love Pushpa ( Huma). The scene of Holi makes a spirit alive. This is one of the good films to watch on Holi.

Films to watch on Holi Having Holi scenes

The above-mentioned films are having songs related to the celebration of Holi. Many films don’t have holi songs but have Holi vibes. They are :

Ram Leela released in 2013 featured by Ranveer Singh and Deepika Padukone is directed and written by the one and only Sanjay Leela Bhansali. The budget of the film was just 45 crore rupees and at the box office, it collected 220 crore rupees. It is a blockbuster film that depicts a Holi scene in the song ‘ Lahu Muh Lag Gaya’. Deepika as Leela and Ranveer as Ram shares very beautiful chemistry of Love separated by the hate of their family. This is a good film to watch on special occasions like Holi.

Toilet, released in 2017 starred by Akshay Kumar and Bhumi Padnekar is a very good story about the unhygienic society of rural India. This film is a good definition of the steps taken to remove the old cultural custom of rural areas which has a bad effect on people’s health. It has a good reason to be listed among the films to watch on Holi. The ‘Lath maar’ song depicts a Holi scene with Bhumi’s and Akshay’s love chemistry, how Akshay pleases Bhumi when she gets angry in this song.

Holi is a film released in 1994 cast by Amir Khan and Naseeruddin Shah. The name itself defines its relation with Holi. The colorful and bright festival of Holi turns into a dark scary situation in this film. This is an old film and has the old days of Holi celebration and one of the good films to watch on Holi.

In the film Padmaavat there is a beautiful Holi scene with Deepika Padukone and Shahid Kapoor making a very iconic Holi scene in the cinema of Bollywood. The film stars Deepika Padukone, Ranveer Singh, and Shahid Kapoor and is directed by Sanjay Leela Bhansali. This film has collected 585 crore rupees at the box office. This is a must-watch by everybody and on special occasions like Holi, this film is a very good option to watch out for.

These are the films having Holi vibes and you can go with them too.