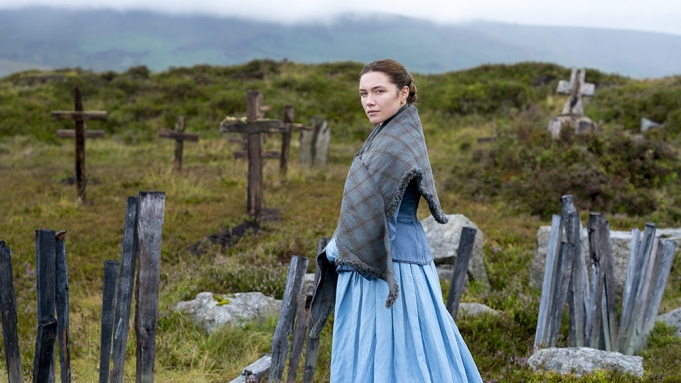 What if we get to know that our favorite stars’ movie or series is coming up? We all will definitely jump like popcorn on our couch 😉 Well, Netflix makes sure we do this as it rarely disappoints its audience. Be it any genre, drama or thriller, documentary or sitcom, and even crime and horror, this streaming giant is winning millions of hearts worldwide. Every week there is a new release on this platform and this time also we are here with a new Netflix movie titled “The Wonder”. Before arriving on Netflix on 16 November 2022, this period drama film had its premiere on 2nd September 2022.

This movie is a period drama set in 1859 but the story is not based on a historic event. The way it connects the beginning of the story to the end of the plot is something that no one of us would have predicted. The movie starts with a narration and ends at that too.

The Wonder is starring Florence Pugh as the main character Elizabeth Wright, a nurse. She is also addressed as Lib in the film. The other prominent role is of the teenage girl Anna, played by Kila Lord Cassidy. William Byrne, the journalist, has been acted very well by Tom Burke.

The Wonder Ending Explained: Why Does Lib Travels To Ireland?

The story starts with the voice over stating that the movie is set in the late 1800s and the great famine is still affecting everyone’s life. The first scene of the film depicts a set that symbolises the 19th century and the voice over then starts telling about the scenario going on between Ireland and Englishman. The next moment we see Florence Pugh as a nurse who has to travel to Ireland. She has been ordered to keep a watch on a girl who has been claimed to be living on a divine substance rather than eating food.

Lib or Mrs. Wright lives all alone and has no family. Upon being called to Ireland, she travels all the way to that country and visits the higher officials. At that place, when she got to know about Anna, whom all believe to be a godly figure. Lib is shocked to realise the fact that Anna has not been eating food for the last 4 months and is still in good condition. She is not ready to accept this fact but being a nurse sheenu that it isn’t possible for a human to survive for months like this. The officials ask Lib and a nun to keep a watch on that girl. Both of them are assigned their own shifts.

ALSO READ: In Her Hands Ending Explained: Who Is Zarifa And What Happened To Her?

The Wonder Ending: How Lib Keeps A Watch On Anna?

Upon visiting Anna’s place, Lib tries to go through every possible thing in her room that can assure her about Anna’s mysterious survival. The little girl believes that it is Manna from heaven that has kept her alive. Her family is devout and all the members believe in Anna so strongly. Lib is not so religious but the family members show immense faith in God and prayers. At her house, Lib came to know about Anna’s brother who died earlier.

Alongside nun, Mrs Wright used to note down every small detail about Anna. She performed constant check ups and diagnosed her. One day when Anna was sleeping, Lib checked all her belongings kept on the table. She found some hair which she understands belonged to Anna’s brother and the next morning, she apologized to the little girl for breaking one of her things. Even though she knew that there isn’t any miracle in Anna’s existence, she wasn’t getting anything as proof that can claim it as a scam.

Mrs. Wright and Anna develop a friendly bond. Both of them spent much time together but then also didn’t get any clue regarding Anna. She reveals about her being a widow. Meanwhile, journalist William arrives to cover the story related to Anna. He was Irish but left the country to study journalism but his family survived the bad days of famine. Mrs. Wright and Williams develop feelings for each other.

How Was Anna Surviving?

Lib soon understands the enter situation and hence stops every family member to meet Anna. The good morning and the good night kiss that Anna’s mother used to give her everyday was just a way of feeding food to her daughter through the mouth. After all the family members, especially her mother was not allowed to meet the girl, her health starts deteriorating and her starvation for food begins.

Lib wanted her to feed Anna but the mother denied. She believed that it’s the only way that can make sure her children depart to heaven. Anna reveals a big truth in front of Mrs Wright where she stated of being raped by her brother. Anna believes that her brother is in hell and her current situation will set his soul free so that he can live in peace.

What Happens To Anna In The Wonder?

Mrs. Wright reports the details to the committee members but everybody denies. She urged William to help her escape this country and take Anna along with them. One day when all the family members went to the church, Lib took Anna out of the house so that William could take her afterwards. Mrs. Wright returned to the home and burned it. She informs everything to the committee members where they declare the little girl dead but all of them are confused about how the house caught fire.

At the end of the movie, Lib returns to London and Anna is also there. William, Lib and Anna start a new life together.