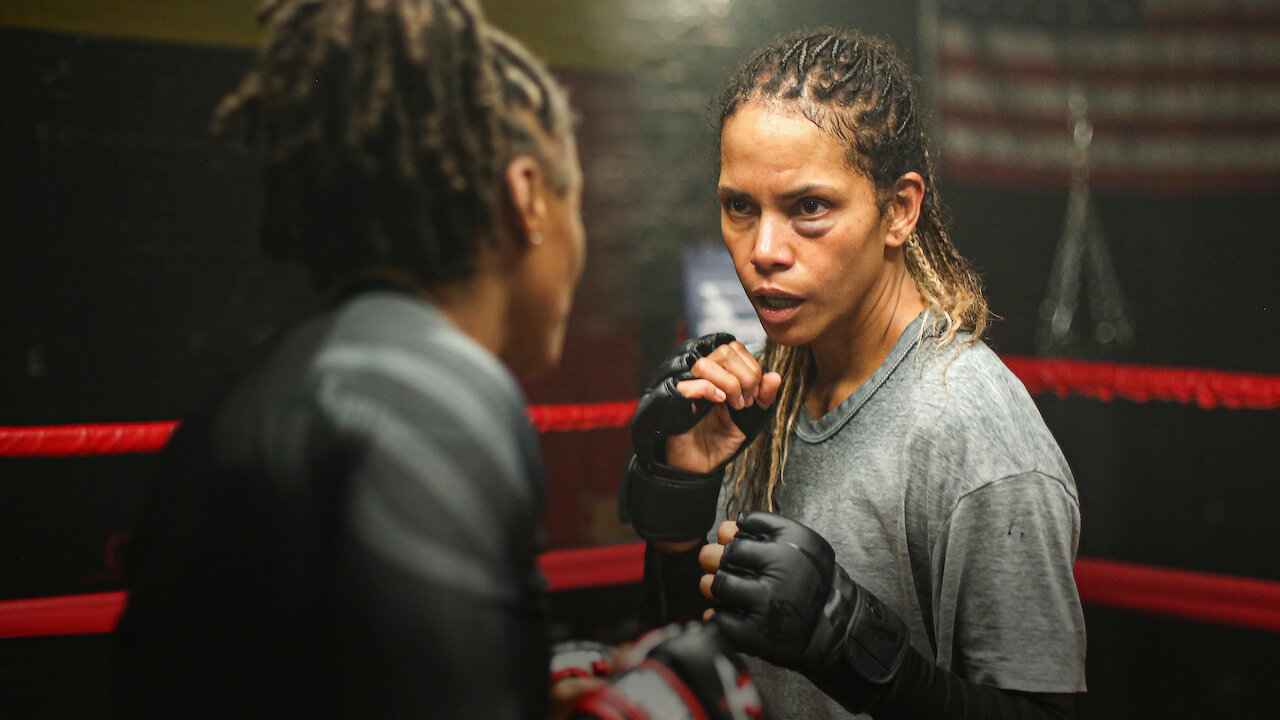 Bruised is a movie in the sports genre portraying the ups and downs of a former Ultimate Fighting Championship fighter. The film was aired on November 17, 2021. The makers include, Halle Berry, the director, Michelle Rosenfarb, the writer of the film and the production team includes, Basil Iwanyk, Brad Feinstein, Guymon Casady, Linda Gottlieb, Erica Lee, Halle Berry, and Terry Dougas.

The movie has a thrilling plot, showing the life of Jackie, who was also known as “Pretty Bull” in the world of fighters, and how she struggled to get fame and all things she has to sacrifice during this journey of her. The cast members are Halle Berry, who appeared as the central figure, Jackie, Danny Boyd Jr played the role of Jackie’s son, Manny, Shamier Anderson, Adan Canto as Jackie’s manager, Desi, Lela Loren as Mrs. Bradshaw, Gabi Garcia as Werewolf, Valentina Shevchenko who appeared as “Lady Killer”, Adriane Lenox played the role of Jackie’s mother and Sheila Atim as Buddhakan Berroa.

Additionally, the film also got into controversy when Cat Zingano, a former MMA fighter of the Ultimate Fighting Championship filed a case against Berry claiming that she at last her appearance in the movie and cut off the conversation completely after the incident took place.

To know whether the story is true and based on some real events, let us read the article further!

Is Bruised Based On A True Story?

Bruised is a story of an MMA girl fighter named Jackie, she was very famous in her early life but after losing four fights continuously, she lost her place. She was facing a financial crisis, she lived with her manager Desi, who was also her boyfriend. To earn a living she used to do housecleaning work. She also had a traumatizing past, her ex-boyfriend was shot in an unfortunate incident and was killed, with whom she also had a boy named Manny, he used to live with Jackie’s mother because he was shocked after the death of his father and remained silent.

Desi was always trying to get Jackie back into the fighting ring. He took Jackie to an underground fight, well-known as “Werewolf”, a fighter challenged Jackie and she lost her temper, they both had a fight and Jackie was absolutely amazing and defeated the Werewolf badly!

After learning that she still has the ability to fight, Desi put her under the training of Bobbi. Meanwhile, she also reunited with her son and her son moved in with her. She realizes that she has been ignoring her responsibilities towards her son therefore she put him in a school. Bobbi was training Jackie to get back in perfect shape and also offered her to sign a contract with him.

READ MORE: Is I Am A Stalker Based On A True Story?

Desi was not happy and with time their relationship was deteriorating, one day Desi became violent and raised his hand at Jackie. Jackie left the place with her son and moved in at Angel’s place. Jackie got a panic attack when she learned that Desi was backbiting her and she screamed at Manny, he left his mother and someone found him and took him back to Angel.

Jackie once again lost her son and she was left with no place to go, she decided to return to training and work hard for her upcoming challenge. She was living with Buddhakan and they both also got intimate. Buddhakan was training her day and night. Jackie finally won the fight against Chavez and went back to her son Manny and promised him that she would be a better mother and also get them a place of their own. In the end, Manny was seen calling her mom and accepting her as his mother from the heart.

The story of Bruised is not based on any real incident and all the characters are imaginary and fictitious. No such incident ever took place with any fighter. The movie is a pure work of fiction and nothing else.

Some Questions And Answers Regarding Bruised

1.) Where to watch the movie Bruised?

You can watch the movie on the OTT Platform, Netflix as well as on Amazon Prime. It is not available on Hulu, Hotstar, or any other platform.

The movie received mixed views from the critics and also it got involved in a controversy in the year 2021, the movie was overall average and neither a super hit nor a flop.

Winding up here, hope the article served its purpose and answer all the questions of the readers. For more and more updates on the latest shows, movies, and more, stay tuned to our website.

MUST READ: Is Sons Of Sam A True Story? Is It Based On A Serial killer?