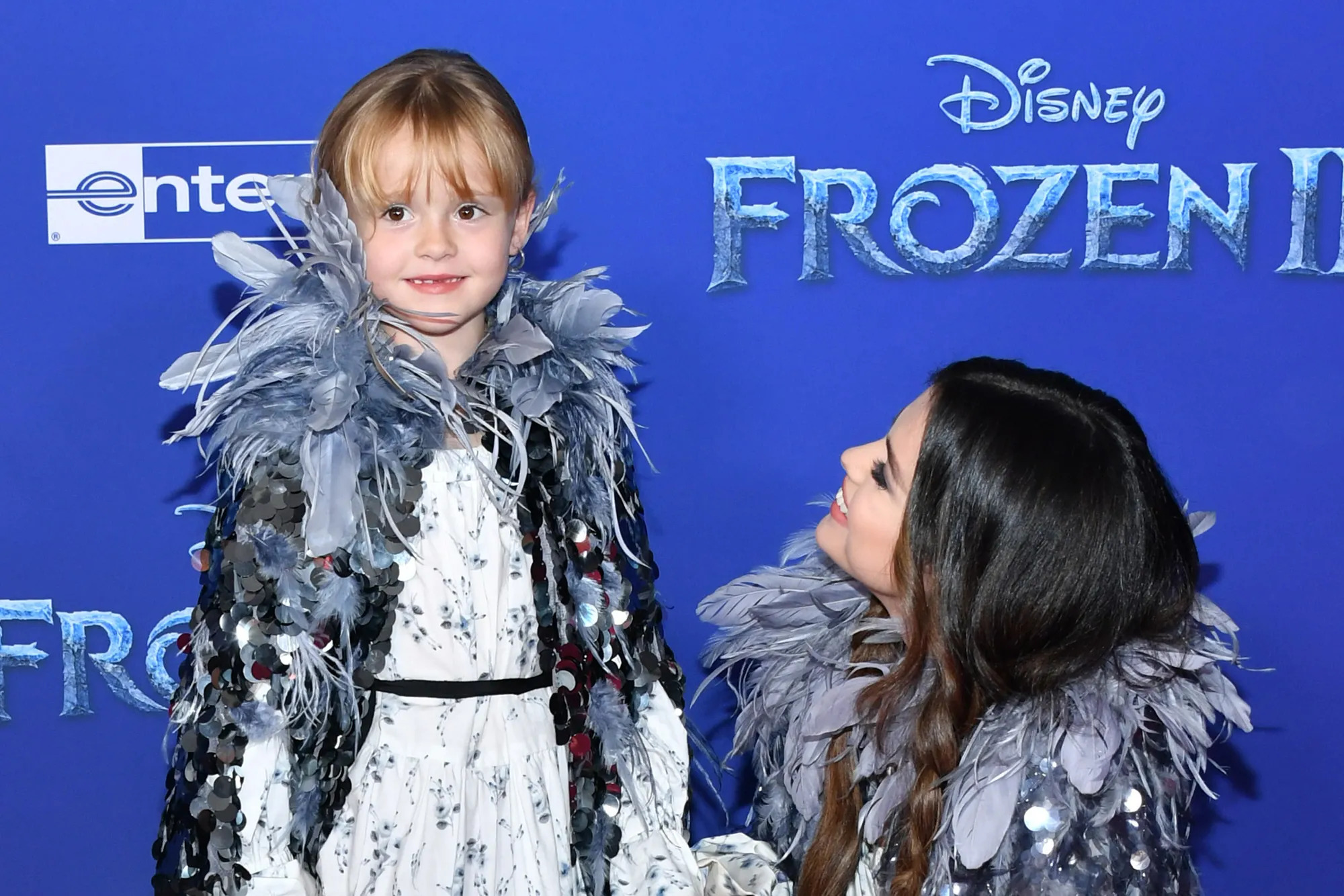 Selena Gomez has been an inspiration for every girl who has limited or no resources and aspires to become something one day. As an influencer, Selena understands her responsibilities and continues to deliver optimism and motivation through her actions and songs.

Selena has two super cute siblings that look up to her. Her parents are divorced and are happily married to different people which is why Selena has a super large family with one mother, one stepmother, a father, a step-father and four grandparents.

Selena’s mother, Amanda Teefey, is currently married to Brian Teefey. Gracie Elliot Teefey is the daughter of Amanda and Brian Teefey who is the most beloved sister to Selena. Selena’s dad, Ricardo Gomez and his wife, Sara Gomez have a cute little daughter, Victoria Gomez.

Selena Gomez is an elder sister to two sisters and a brother, Marcus. Marcus is the son of Sara Gomez and her ex-husband. Selena would have one more little sister to adore had her mother, Mandy, didn’t suffer through a nasty miscarriage in December 2011.

Selena Gomez became an elder sister to Gracie Teefey in June 2014. A year later, Selena got her second sister in the same month. Ever since then, Selena has taken up the role of an elder sister graciously.

Selena’s Relationship With Her Sisters

Selena shares a strong bond with her sisters, she adores and loves them both. Though she is seen with Gracie more than with Victoria, Selena claims to love both of them equally. Despite the differences between Selena and her parents, Selena has never let them affect her bond with her sisters.

As soon as Gracie was born, Selena has been obsessed with her. She keeps posting pictures and videos with Gracie on her social media handles frequently. Selena wants Gracie to be a fearless leader and know her value as she grows up. She wishes to be someone who Gracie and Victoria could look up to.

Selena has admitted to having a maternal side for Victoria. As Victoria is the youngest sibling of Selena, she wants to keep her protected at all times.

In December 2019, Selena took Gracie to walk the red carpet with her. In an interview, Selena said that it was the most beautiful red carpet experience she had. She also admitted that Gracie has become dramatic and loves to dress up in glitter.

While Gracie is all for the glitter, Victoria stays away from the public eye. Despite Gracie being all over Selena’s social media, Victoria and Selena seem to have a lovely bond as well.

Selena’s Relationship With Her Parents

Selena Gomez is the daughter of Amanda Teefey and Ricardo Joel Gomez. Both of her parents are now married to someone else and have happy families of their own. Selena is an integral part of both the Teefey and Gomez clans.

When Selena was younger, she used to blame Mandy for her incomplete family. Amanda was just 16 when Selena was born and Rick wasn’t very old either. Both of Selena’s parents were young and had to complete their education and build a career along with raising her. This complication resulted in the fallout of Amanda and Rick just after five years of their marriage.

Despite the fallout between her parents, Selena seems to share a sweet bond with both of them. She is constantly seen with her mother and stepfather, Brian. Selena shares a very strong bond with Brian and is thankful to have him in her life. Some would even say that she loves Brian more than her own father.

Sara and Selena have a very secretive relationship, Selena hardly talks about her. While Brian has successfully adopted the role of Selena’s father, Sara has not yet developed that kind of relationship with Selena.

MUST READ: Was Ted Bundy’s Father Actually His Grandfather?

Amanda was just 21 when she divorced Rick and decided to raise Selena all on her own. The world became a cruel place for her as she had to earn and raise a daughter with little to no help.

Selena and Mandy had to survive on small meals even with Mandy working three jobs a day. There were days when Amanda had lost hope and worked twice hard but nothing seemed to work in her favour. She kept pushing through the muddy waters and tried to rise back stronger.

Eventually, the expenses became too much and Mandy couldn’t bear the stress. They moved out of Texas and things seemed to get better in the green pastures they moved to.

In the early 2000s, Selena was approached to act in a children’s series “Barney and Friends”. Selena started working on different series and films ever since. Amanda became her manager as Selena kept on climbing the glamorous stairs and kept Selena motivated to date.

Despite Selena working from a very young age, she received popularity from her band ‘ Selena Gomez And The Scene ’. She has been releasing super-hit albums like ‘Kiss And Tell’, ‘A Year Without Rain’ and many more.

Selena is more famous for her singing skills than her acting skills though both of them are on par. Selena has excellent songwriting skills as well, she has written amazing songs and is continuing to do so.

One of the most famous roles Selena has got was of Alex Russo in Wizards Of Waverly Place. Since she played Alex, her acting career has flourished.

Selena’s TV show ‘Selena + Chef’ has garnered more popularity for the actress. As its name suggests, it’s a cooking show in which Selena cooks mouthwatering dishes.

Aside from being a singer, an actor and a songwriter, Selena also has a production firm. She is the producer of various blockbusters and TV shows like ‘13 Reasons Why’ and many more.

READ THIS: Meet Kristen Dunst’s Son: Who Is The Guy?

Selena is currently single, she seems to focus on her career and family more. Despite the actress being almost 30, she has never had anything serious with anyone. Selena has dated many men but has never stayed in a relationship for long.

Her last almost serious relationship was with a Canadian singer but that did not last even for a year. Selena has dated many musicians and singers like Nick Jonas and DJ Zedd but none of them lasted for more than a year.

For someone as humble as Selena, she has surely been a part of many controversies.

Pop Star Selena gained an insurmountable amount of popularity in the early 2010s. Amanda was her manager throughout Selena’s career until she kicked her out without so much notice. Selena didn’t only kick Amanda out but also Brian who was a part of her managerial team.

Selena claimed that she wanted a more professional team which was seen as a very controversial statement since Amanda was the reason Selena established her roots in competitive Hollywood. Despite Selena’s harsh statement, Amanda and Brian took it positively and wished the young star a better career. Amanda said that she wasn’t planning to manage Selena forever and that she was glad that her daughter had taken such a bold decision all on her own.

Though Rick didn’t raise Selena, he claims that he was an active part of her life. In an interview, Selena claimed that Rick used to take her to basketball matches when she was 7. This statement of hers turned satirical and controversial when the actress claimed that her father used to spend more time with the waitresses who dropped over to meet her.

Just like Amanda and Brian, Rick took it lightly and didn’t drag the topic. Now, both of them share a bitter-sweet bond.

One of the most affected people by the #MeToo movement was Woody Allen who was close to Selena Gomez. Amanda tried to distance Selena from Allen but she didn’t listen and continued her relationship with him. Amanda was very outspoken regarding Allen and Selena’s work relationship. Amanda stated that Selena doesn’t listen to anyone but herself and is adamant about making her own decisions.

One of the recent controversies Selena was involved in included her mother as well. In 2017, Selena and Justin Beiber decided to give another chance to each other. Mandy strongly opposed this relationship and when Selena didn’t listen to her, Amanda ended up in a hospital. Due to Amanda’s health complications, Justin and Selena decided to take a break and give Mandy some time to heal.

READ THIS: Does Justin Bieber Have A Child? Is Hailey Bieber Pregnant?