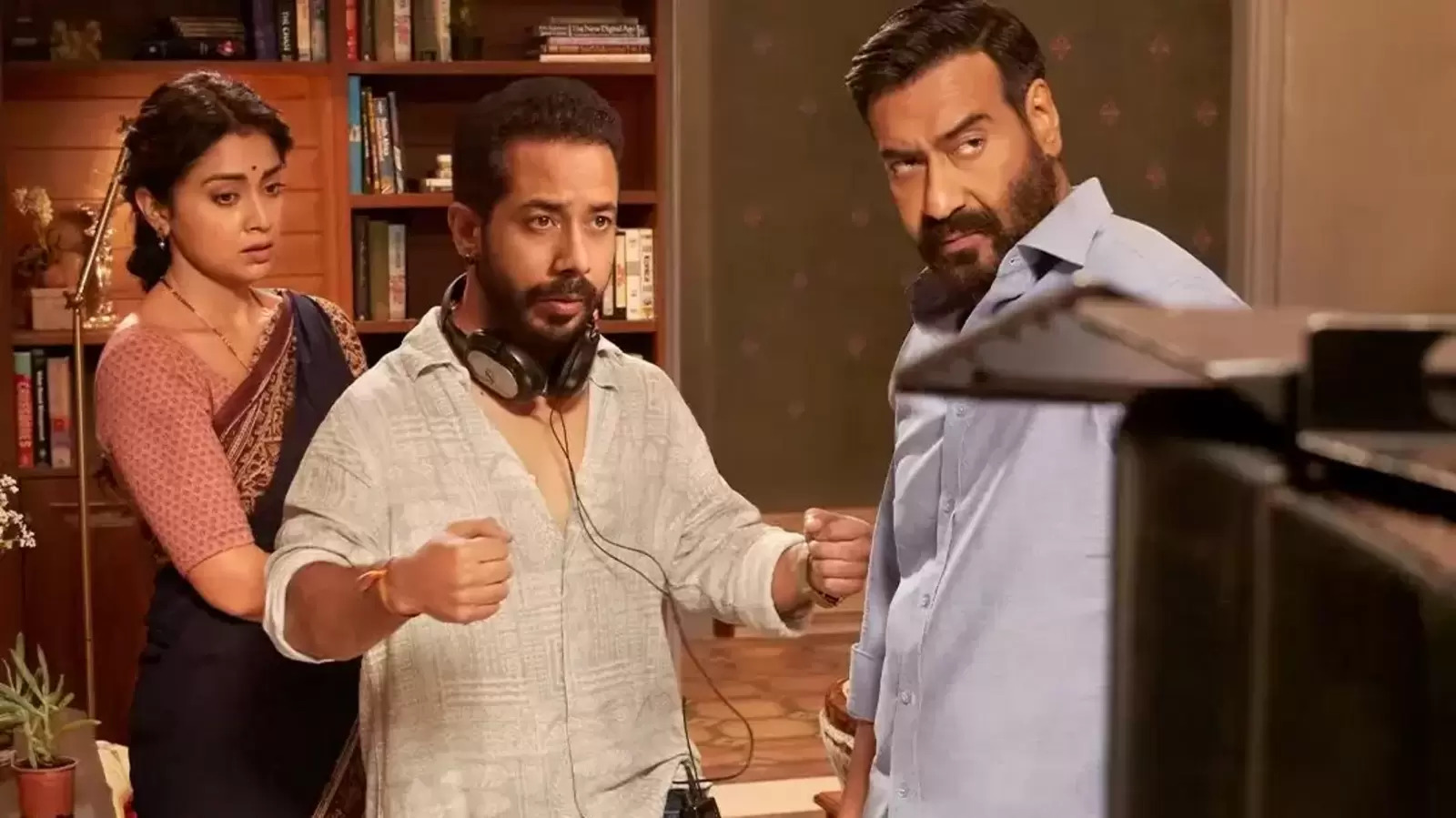 When someone asks, “What happened on 2nd October?”, we can’t help but think of the movie Drishyam. And why not, after all, Drishyam is the first movie that truly did justice to the thriller genre. Before Drishyam, we Indians had only watched Hollywood thriller films and expected that Bollywood can’t touch ‘thriller’, but after Drishyam, every one commended Ajay Devgan’s iconic style of planting their escape plan into everyone’s heads. Despite its massive fanbase, very few people know that Drishyam is a remake of a Malayalam film of the same name.

With a mediocre budget of just 38 crores, Drishyam managed to make almost 115 crore rupees at the box office which, let’s be honest, was well deserved. Drishyam is a one-of-a-kind film that one doesn’t get to watch now and then. It’s that movie that everybody talks about and discusses for decades! We still see memes on 2nd October saying, “Don’t forget guys! On this day, Vijay and his family went to a sermon in Goa and returned home the next day.”

After the film’s (Malayalam) sequel release in 2021, Drishyam fans were hoping and were on the edge of their seats to get a Hindi remake of the same, and fortunately, the makers of Drishyam (Hindi) didn’t let us down. After all, doesn’t our iconic thriller deserve a sequel? Of course, we all want to revisit our classic mysterious characters and watch them getting tangled in Vijay Salgaonkar’s web. We’re getting Drishyam 2 very soon and with that comes the question that everyone wants the answer to Is Drishyam 2 based on a true story?

Is Drishyam 2 Based On A True Story?

No, Drishyam 2 is not based on a true story. However, the story of the original Malayalam movie Drishyam (which the Hindi Drishyam is a remake of) was inspired by an incident that the movie’s director and writer, Jeethu Joseph witnessed. According to him, the idea struck him when he overheard a conversation which was about the plight of two families, who were involved in a legal battle. The protagonist of the movie, George Kutty was based on a person who wanted to protect himself and his family from a crime that he allegedly committed.

You must be thinking, did that person escape our judicial system after all? The answer to that is a big no. He was caught and sentenced to jail. At the end of the day, a movie is a movie and we should all leave it at that. No wonder we commit mistakes and expect them to vanish out of the blue, as we are somewhere hoping for the luck of a movie protagonist. In real life, actions have consequences and that is fair. Imagine a criminal walking freely, is that what we want? Just food for thought, our dear cinephiles.

The sequel of Drishyam will surely make us bite our nails in anticipation! Fans should prepare themselves for another thriller story filled with plot twists and heart-wrenching violence. If we’re being honest, Drishyam 2 may even set the milestone for thriller movies, once again, breaking its record. So, lay back and be ready for more mysteries!

MUST-READ| Is Ram Setu Movie Based On A True Story Or Is Accumulated With Myths?

As expected, Drishyam 2’s storyline will be continued exactly where it left off in the previous one. Don’t remember what happened exactly in the previous movie? No worries, we’ll make sure to tell you every single detail in this article. Vijay Salgaonkar and his family were freed from judicial consequences, thanks to his brilliant mind. We saw him coming out of a police station that was under construction, with a determined face. It suggested that he buried the dead body where no one could find it. Ever. According to him, he did whatever he did out of self-righteousness.  It also blurs the lines between morality and immorality, forcing the audience to make their free opinions on the matter.

Drishyam 2 will most likely start from there, showing the Salgaonkar family once again caught up in the web of their actions. If we go by trailer, the new character (played by Akshaye Khanna) will be making things difficult for Vijay to uncover the secrets that he buried, pun intended. The characters will lead us to a plot filled with moral ambiguity. We think that the movie is a perfect example of what a sequel should ideally be. Starting from the point where it left off, having the same characters as the last one is one of the many things that makers have done right. Hopefully, the audience will enjoy it as much as they did the last one, making the film a blockbuster once more.

The cast of Drishyam 2 is incomplete without the main characters. Ajay Devgan will play the role of our beloved protagonist Vijay Salgaonkar, an orphan and a middle-class man who claims himself to be a chauthi-fail (who dropped out of school after class three). He runs a cable TV service in the daytime and watches movies at night. He is quite a mastermind when it comes to practical knowledge (of the real world) as he believes in learning these things from the films that he watches.

Shriya Saran will reprise her role as Nandini Salgaonkar, Vijay’s loving and devoted wife and the caring and adoring mother of their daughters Anu and Anju. She never loses hope in her husband and is ready to go beyond the extremities to help him. Also, Mrunal Jadhav will return as the youngest daughter of the couple, Anu Salgaonkar.

Moreover, Ishita Dutta will also be reprising her role as Anju Salgaonkar, Vijay and Nandini’s adopted daughter and Anu’s elder sister. Tabu will renew her role as Meera M. Deshmukh, the Inspector General of Goa, who is a stern officer and also Sam’s mother, who is the root of the Salgaonker family’s misery, as he was the one who blackmailed Anju and eventually got killed due to an accidental blow of a sharp object by one of the members of Salgaonkar family.

The interesting thing about Drishyam 2 is that there is a new cast member who will be helping in reopening the closed case and solving it and he is none other than our favorite Akshaye Khanna. So, fans can look out for an even more gripping plot as he is an expert in playing such roles.

MUST-READ| Is Kantara Based On True Story?

The trailer for Drishyam 2 was released on YouTube on October 17, 2022, by Panorama Studios. The trailer also got a lot of views and trended on YouTube. People are excited about it as the trailer only gives us a little peek at what we are about to witness this time. Without revealing too much, the trailer is a perfect setup for anyone interested in the sequel (which is everyone).

Those who haven’t watched the trailer yet, go watch it! We assure you that you won’t be disappointed even a little bit. Yes, it’s that good. Now, talking about the trailer which is being talked about all over the internet. It starts with a strong dialogue: Truth is like a seed of a tree, no matter how deep you bury it, it will come out sooner or later. It is worthy of goosebumps. Moving forward, we also see that the Salgaonkar family is nervous as the case is reopened, or is it? Maybe it was never closed! We also see Akshay Khanna’s iconic presence as he says, “Often your enemy allows you to defeat them.” He also makes us nostalgic by reminding us of the legendary date which is 2nd October. We all are very excited for Dirishyam 2 to be released and hopefully, it’ll stun us more than Drishyam itself!

Tabu’s presence can never go unnoticed and in the trailer too, she appears to be a strong persona, instead of a grieving mother. She confesses that she misjudged Vijay and now Vijay shouldn’t underestimate her, as it will lead to his defeat and her victory.

Fans, it’s official! Drishyam 2 will be released in theaters on November 18, 2022. Whether or not Vijay and his family will be caught, one thing is for sure. We are going to get a mind-blowing movie once more. Mark the date, as we’re sure you won’t want to miss it for anything. We will keep you updated on any news or announcement related to Drishyam 2. Till then, how about rewatching Drishyam and walking down your memory lane? Seems like a fantastic idea, as you might have missed some plot points in these seven years. Grab your popcorn and watch Drishyam once more as there is almost a month left for the sequel to be released!

MUST-READ| Is Laal Singh Chaddha Based On A True Story? True Story Might Shock You!