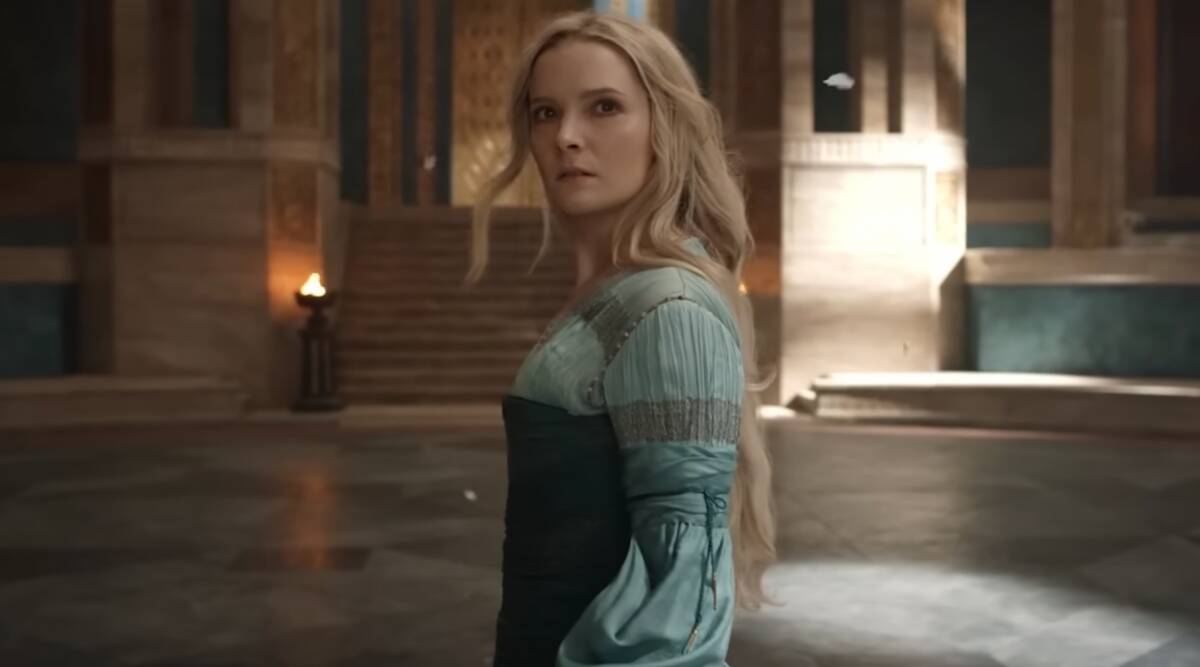 It seems like only yesterday when fans all around the world sat down to rekindle their obsession with Middle Earth. When the first episode of season 1 was released on 1 September, it felt like we were finally back home. To a place full of beauty and kindness and love. Sure, there was hatred and darkness too but this was still a world that we understood and cherished.

Alas, this happiness was only a month and a half long. With the release of the season finale, episode 8, on 14 October 2022, we simply don’t know what to do with ourselves now that the great world of Middle Earth, our home, has thrown us out. It was a sad moment, indeed.

But sorrows never seem to last in Tolkien’s world, do they?! Our misty eyes were soon filled with joy when we found out that a second season is already in the works and that we can expect it soon-ish. And today we’ll talk all about the speculations surrounding this marvelous show, a little bit about the first season and how it ended (hint: it ended gorgeously, just so you know), and all that we can expect from the next one. Here are what we know about Lord of the Rings: Rings Of Power Season 2 Release Date.

Lord of the Rings: Rings Of Power Season 2 Release Date

We promised you good news on this matter and that’s what you shall receive! Because it’s now official – Season 2 of Rings of Power will be released. In fact, the producers are already on it.

When a new show is released, we are never sure of what it might entail. There is always some confusion regarding the number of episodes, the characters, and most importantly, whether a new season will be released. But now you can lay all those fears to rest, Galadriel fans because there is definitely going to be a new installment to this exciting story.

Our sources reported that the whole Amazon Prime production team, along with the cast, already began working on the next season in October this month. This news left the fans in a flurry of excitement and speculation as to the exact dates and the plotlines that will be covered in the next season.

And while we can only expect and hope where the plot is concerned, the release of the second season of Lord of The Rings: Rings of Power will probably be around the year’s end in 2023. We know it’s a long delay but hey, we can handle the wait what we won’t forgive is a compromise with the quality of the content so let’s just give them the time they need to come up with a fantastic new season.

MUST-READ| Is High: The Confessions Of An Ibiza Drug Mule Based On A True Story?

Lord of the Rings: Rings of Power Season 2 Story

Rings of Power began with young and unflinching Galadriel at the helm leading the search party for finding out the whereabouts of Sauron. Centuries after the great war with Morgoth and Sauron, Galadriel still felt the sting of her brother Finrod’s death clear as day. For her resting before Sauron’s every single trace of Sauron’s existence had been wiped off Middle Earth was not an option.

But the High King had other plans for them. Years had passed and after so many centuries since the great war, people and elves alike simply wanted to forget that it ever even happened. To that end, Galadriel and the search party were recalled, honored, and ordered back home to Valinor. Young Elrond had his doubts and believed his friend Galadriel but couldn’t go against the High King’s commands.

But the king had forgotten one thing – Galadriel was a force unto her own and she was not going to be pushed around. She jumped off the ship to Valinor and found herself alone in the vast sea, only to be rescued by some humans. Among them was a man named Halbrand, the forgotten Southlands king, who was later revealed to be Sauron himself. That revelation was a lot to handle, must say. We had been angling for a Galadriel and Halbrand romance from the start but this new development put that to rest forever.

The show also introduced us to the careful and proud Harfoots, who above all else just wanted to be left alone. Our beloved Nori – as adventurous in spirit as Bilbo and as kind and helpful as Frodo – stole our hearts the moment she entered the story. The rebellious streak in her won against all caution from her parents when she helped the Stranger that fell from the sky.

And while Nori dealt with the waves of disappointment that her kind gesture created among the Harfoots, Galadriel had her own struggles dealing with the Queen Regent of Numenoreans who was still against helping her. Bronwyn and Arondir’s romance walked over tight ropes as well when Arondir was captured by the orcs and thrown into the pit. All the elves that stood guard over the tower had been reduced to mere slaves by this point.

Mentions of a new character, Adar, were whispered by those despicable and ugly orcs. Getting reacquainted with those hateful creatures was very uncomfortable indeed. We had left all the unpleasant memories of Orcs behind after the war against Sauron was won back in Lord of the Rings but Rings of Power brought it all back. Don’t get us wrong, we are thrilled to be able to experience this delightful world again. But orcs? Yeah, they are quite unwatchable with their smug voices and slimy faces. Oh, Legolas, where are you when we need you?

As the episodes went on Rings of Power continued to excite our curiosities. With hints of the stranger being Gandalf peppered throughout the season and a mystery surrounding Sauron’s real identity, we fans soldiered on as we braved the perilous seas of this series.

So the first season left us in hooks and chains what with all the suspense surrounding Elrond and the Dwarves, Sauron and his plans for Middle earth, and the fate of Harfoots. All of this leads us to expect the second season to follow Arondir and Brownwyn’s romance a bit more in-depth. We can also hope for more information on the Stranger as well. Although the show all but told us that he is Gandalf the Grey, we won’t mind seeing a few proofs of that in action!

Next, we are optimistic about Sauron getting more screen time and Nori’s strengths and restraints being tested by the trials and tribulations that await her. She had already earned a bad mark from the migration before the last season ended, so it’s no use avoiding the fact that it won’t be smooth sailing for Nori for a long while to come.

The possibilities are endless and we are impatient. But until the time machine is invented, we are just going to have to be okay with our imaginations.

Lord of The Rings: Rings of Power Season 2 Cast

The beginning of the first season of the show got us into fits of fancy with the very first minute itself when it gave us young Galadriel with her brother Finrod. Yes! Finrod, played to perfection by Will Fletcher, also graced us with his presence in the series. And though his screen time was very limited, the effect he had on us was everlasting.

Further, we have Morfydd Clark as Galadriel and we thanked the producers over and over for this choice because she played Galadriel just as she should have been represented – feisty and unflinching. Next, we have Robert Aramayo playing the role of young Elrond and he matched the role accurately. As if he was born for it! Then we had Sophia Nomvete as Disa, Nazanin Boniadi in the role of Bronwyn, and Markella Kavanagh as the delightful Nori.

So no doubt, these primary characters must remain unchanged in the next season as well. Fans are also excited to see how the character of daniel Weyman develops in the second season. And since the last episode of the first season confirmed, to an extent, his being Gandalf the Grey, we are even more anxious to see him regain his senses as the story progresses in Season 2.

Among other supportive roles, we can expect to see Charles Edwards, Owain Arthur, Benjamin Walker, Lloyd Owen, and Megan Richards as Poppy as well!

All in all, it’s looking really good for the second season. And we cannot wait to get on board with all these delightful characters once again.

MUST-READ| Raising Kanan Season 3 Release Date And All Other Updates!

Lord of the Rings: Rings of Power Season 2 Trailer

Since the second season of Rings of Power is currently in the making, we doubt there is any possibility of a trailer for it coming out anytime before late 2023. And we know that’s a disappointing prospect for all Middle Earth fans but hey, chin up, because you can still rewatch the trailer for the first season on Youtube and get those nerves excited again!

Where to watch Lord of the Rings: Rings of Power Season 2 Online?

We truly hoped to have something more positive to write here regarding this but alas, it’s not to be for now! There is no way to watch the second season of Rings of Power online yet. Because it’s still in production (which is good news, at least) but you can stream the whole first season on Amazon Prime right away and refresh your memories.

1. When was Lord of the Rings: Rings of Power initially released?

Lord of the Rings: Rings of Power Season 1 was initially released on 1st September 2022.

2. How many seasons of Lord of the Rings: Rings of Power Are There?

There is a total number of 2 seasons of the show.

3. When is the Lord of the Rings: Rings of Power Season 2 release date?

There is no release date announced for Lord of the Rings: Rings of Power yet.

4. Is the Promo for the Lord of the Rings: Rings of Power Season 2 released?

5. What is the genre of Lord of the Rings: Rings of Power Season 2?

Lord of the Rings: Rings of Power web series is a Fantasy- Drama series.

MUST-READ| The Patient Season 2 Release Date: Will It Ever Be Renewed?