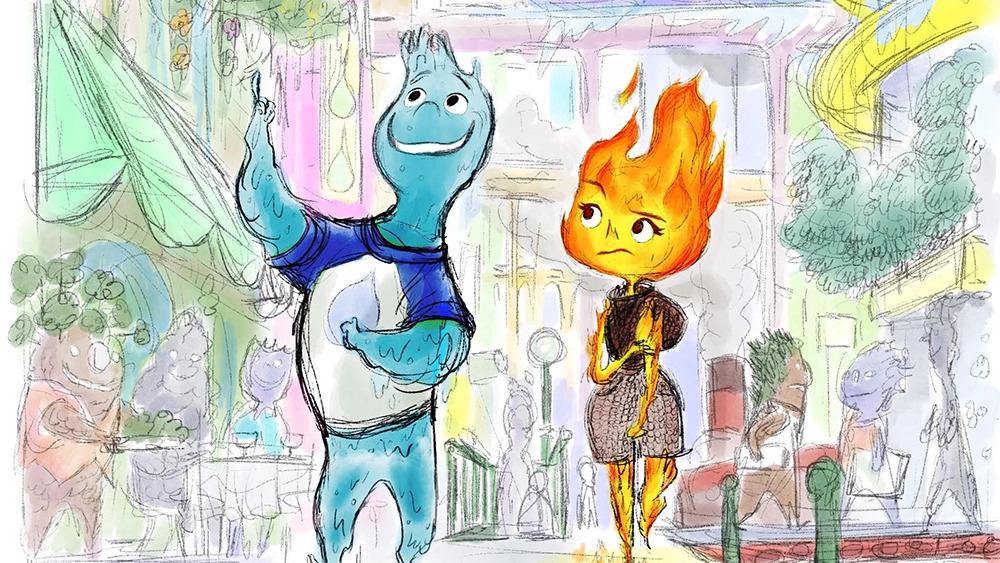 Do you have a keen interest in elements of mother nature and wish to see them animated and woven into a story, with their plot points and character traits (in which you get to know everything about them and more)? Also, have you played the game Fireboy and Watergirl’ or even heard of them? If yes, then say no more! We have exactly the right movie for you to watch which is Elemental! Many of you might already know about it as Walt Disney Pictures has recently released a logo, revealing its first look and a little hint of what the story will revolve around.

In addition to that, Pixar has also recently shared concept art in order to give its audience a sense of what they’re about to experience in the movie’s visuals. In the art, the fans can notice the detail in the water droplets dripping off of Wade (the male lead) and the fire in Ember’s (the female lead) hair burning into the air. It looks genuinely ethereal. It is going to be an incredible journey for all Pixar and Disney enthusiasts for sure. Tune in and we are sure that all heartfelt animation fans will have something great to look forward to in 2023.

The romantic comedy-cum-adventure animated movie distributed by Walt Disney Studios Motion Pictures, directed by Peter Sohn, and produced by Denise Ream is all set to release in the summer of 2023. Although it’s not clear yet if it will be a theatrical release or if the makers will release it directly on Disney Plus. If one has to say something, I would surely say that Elemental should be released in theatres when it debuts, giving the audience a well-deserved big-screen experience that they’ve been waiting for, for almost two years now due to Covid-19, if we set aside the release of Lightyear, which was released earlier this year.

Disney and Pixar’s next collaboration, Elemental was announced this year. And now, new details have been shared with the fans in Disney’s latest D23 Expo, where Director Peter Sohn (best known for The Good Dinosaur, Ratatouille, and Wall-E) was present to interact with the audience, which was held on September 9, 2022, at the Anaheim Convention Center in Anaheim, California. Pixar also released the poster of the film along with the release date on their official Twitter account.

“In the early 1970s, my parents relocated from Korea to the USA and built a bustling grocery store in the Bronx. We were a part of many families who traveled to a new land with hopes and dreams. All of us eventually mixed with other languages, cultures, and wonderful and welcoming neighborhoods. I think that’s what led me to the idea of Elemental. Its story is based on the classical elements of nature – fire, water, land, and air. And naturally, some elements easily mix with others ones while others don’t. What if all these elements were alive and kicking?

The much-awaited movie is all set to release on June 16, 2023, by Disney and Pixar. This means that it will be released exactly a year after Pixar’s last movie Lightyear (which was kind of a prequel to Toy Story, telling the backstory of Buzz Lightyear who was a prominent character alongside Woody in the former). Due to the ease of Covid-19 restrictions, Lightyear was released in theatres, after nearly two years, although it did not perform well at the box office.

One might say that the underperformance of Lightyear may lead Pixar to reconsider its decision about releasing yet another film in the theatres. The fact that all of the other films including Luca, Soul, and Turning Red, which was released directly on Disney Plus performed well, may also lead to the same. Be that as it may, we can rest assured that Elemental will, eventually, be released on Disney Plus, whether or not it will be initially released theatrically.

According to Pixar, Elemental is a sort-of romance story about the two main characters named Ember and Wade, who are made of seemingly opposite elements. Ember is a tough and ‘fiery’ woman (which indicates her element as ‘Fire’) and Wade is a go-with-the-flow guy (which indicates his element as ‘Water’). Both Ember and Wade live in a city where all the other elements and/or elemental creatures co-exist. Throughout the movie, both the characters are supposed to come to terms with how much they both have in common, despite their ‘elemental’ differences.

The producers also revealed that Elemental is about anyone who has ever made a sacrifice or taken a risk. At the expo, the fans also witnessed that the visual style of the two characters is unique in a way that has never been experienced before. Ember is a tough girl, as every strong female lead should be, but sometimes that toughness turns into a temper that she can’t control. According to them, “Here at Pixar, we made sure that she looks like she’s made of fire, instead of being on fire.” Then there’s Wade, who is your sappy, water-guy and because he’s see-through, we always know what he’s feeling or what he’s experiencing at that moment. For Wade, the team at Pixar made sure that he’s got that fun, sloshy watery qualities to him and we’re really proud of how it has come out to be.

The X factor that makes the story more interesting is that it was inspired by Peter Sohn’s real-life experiences in New York, where he grew up. Moreover, Pixar is always been known for its unique storytelling, breathtaking animations, and relatable plot, teaching us an emotional lesson somewhere in between. Elemental will deal with the elements of the world, naturally personified. So, naturally, all the elements including fire, water, land, and air will be shown as central to the story. The studio is also known and praised for including diverse characters in its movies and giving prominence to minority characters. Disney and Pixar have always given us many heartfelt and incredible hit animated movies whenever they’ve come on board together, for example, Up and Finding Nemo. So, sit back and gear up for another amazing animation from two of your favorite animation studios.

According to the producer Denise Ream, the on-screen chemistry of the two characters is also a very crucial part of the story, and finding the two voice actors who could bring the same chemistry was equally important. It is confirmed that Leah Lewis (known for Nancy Drew and The Half of It) will take on the role of Ember and Mamoudou Athie (known for Jurassic World Dominion and Black Box) will take on the role of Wade. The supporting cast has not been announced yet, but hopefully, we’ll come to know about it soon and will keep you updated.

Since there is a lot of time left for Elemental’s release, the trailer has not been released yet. We will have to wait some time for there to be a teaser or even a snippet of what we are going to witness. No official announcement has been made yet, either by Pixar or Disney. Seems like the makers are taking their time, building the craze and excitement for the upcoming movie.

Nevertheless, we have a new poster revealing the hands of the main characters trying to get as close to each other as possible. Now, one may wonder, what happens to two characters in love who can’t even touch each other? We’re about to find out! In addition to that, there’s also this nice cover for the movie, where Ember and Wade are gazing into the city silently, standing next to each other. It feels surreal, the surroundings of the place where they are standing. It also reveals their world, which Pixar is especially known for. Every time Pixar takes us into a new setting, there are rules to learn, characters to be introduced, and basically, limitless exploration.

Even more conceptual art was revealed at the Pixar booth, showing off an energetic world that feels alive with all different kinds of elemental creatures. One thing is for sure. This movie is going to be a massive hit, judging by the public’s response to it at Disney’s D23 Expo in California. Overall, Elemental looks absolutely mesmerizing, both in style and in the setting. From whatever we know, it feels like Elemental has all the key elements for it to be a classic.

Where To Watch Elemental Online?

It is certain that Elemental will eventually be available to watch on Disney Plus. Although before that, it can also hit theatres. It would be very soon to assume anything whether it will be released on Disney Plus directly or it will see its box office earnings. It is likely to be released at the box office, following the lead of Pixar’s last movie Lightyear. But we will have to wait for the official announcement by Pixar and Disney studios to know the final information.