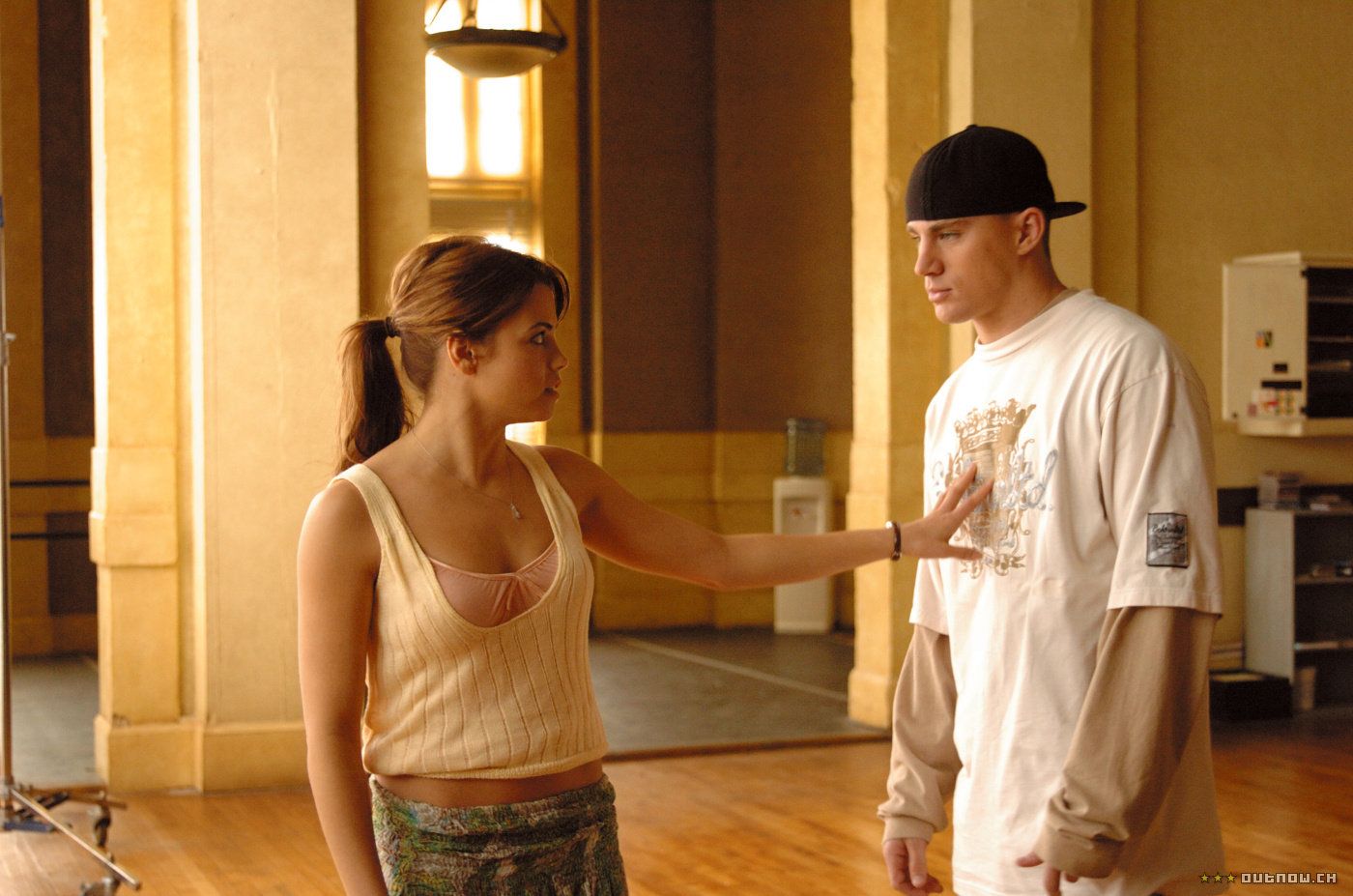 Step Up is a film franchise based on dance with a little romance in it. The first movie in the series was created by Duane Adler and was released in the year 2006. The movie was named ‘Step Up’ and had Channing Tatum (Tyler Gage) and Jenna Dewan (Nora Clark) as the main lead and received an IMDB rating of 6.5/10. The said movie franchise had five more movies that followed ‘Step Up’ namely, ‘Step Up 2: The Streets’ (2008) with Adam Gary (Moose) and Briana Evigan (Andie) as the main leads, ‘Step Up 3D’ (2010) with Adam G. Sevani (Moose) and Sharni Vinson (Natalie) as the main leads, ‘Step Up Revolution’ (2012) with Ryan Guzman (Sean) and Kathryn McCormick (Emily) as the main leads, ‘Step Up: All in’ (2014) with Ryan Guzman (Sean), Adam Gary (Moose) and Briana Evigan (Andie) as the main leads, and ‘Step Up: Year of the Dance’ (2019) also referred to as ‘Step Up China’ with Jade Chynoweth (USA Phantom Dancer), Meng Meiqi (Xiao Fe), Janelle Ginestra (USA Phantom Dancer) and Zhou Yixuan (Big Bird) as the main leads. The franchise also had a two-season television series named Step Up: High Water (2018) which starred Lauryn McClain (Janelle Baker), Marcus Emanuel Mitchell (Dondre), Petrice Jones (Tal Baker), Naya Rivera (Collette Jone). Ne-Yo (Sage Odom), Kendra Oyesanya Willis (Poppy Martinez), and Terrence Green (Rigo Octavio).

Since the movies the franchise holds are not actually interlinked and have separate stories, to begin with, it is possible to have another movie coming out but it would require a really big producer push, and also there has been no official announcement stating a release of a new movie. The reviews of the franchise have not been bad either and it grossed a collective total of $651 million. The last movie of the franchise ‘Step Up: Year of the Dance’ (2019) is also referred to as ‘Step Up China’ as it was a Chinese film directed by Ron Yuan and has a movie outline that has young dancers from different social standings from Beijing come together as a crew that would eventually become China’s best and create a bond equivalent to that of what a family has. Though it was released on 26th June 2019 in theatres internationally it was released in the U.S. digitally almost half a year later on 21st January 2020 with the name Step Up China.

The reason why the franchise might not have another movie coming might be because of the success of the television series named ‘Step Up: High Water’ which started airing on 31st January 2018 brought in for it. The said series was canceled after two seasons in August 2019, but by May 2020, the series was re-announced and was promised a third season with improvisation in the name of ‘Step Up’. The main leads of the original ‘Step Up’ film that gave rise to the franchise, Channing Tatum and Jenna Dewan executive produced ‘Step Up: High water’ season one with Adam Shankman, Jennifer Gibgot, and Meredith Milton.

If there were to be a movie coming out for the Step Up franchise after the television series, we believe it to have the same cast as the television series ‘Step Up: High Water’ with Sage Odom (Ne-Yo) and Naya Rivera (Collette Jones) as the main cast with others like Marcus Emanuel (Dondre), Janelle Baker (Lauryn McClain) and Tal Baker (Petrice Jones) since the series bought in many viewers who appreciated the series to a successful extent.

The story of the movie could be an extension of what the television series did not elaborate on, more of like having the story mainly revolving around Sage Odom (Ne-Yo) and Collette Jones (Naya Rivera) and not around the sibling pair Janelle Baker (Lauryn McClain) and Tal Baker (Petrice Jones) and their interests.

The story could probably show us how Sage Odom (Ne-Yo) became the legend he is now and how Collette Jones (Naya Rivera) was successful by herself and encountered an injury making her leave the stage and it can also add on about what made her still stick by Sage Odom (Ne-Yo). It could bring light to the history both of them shared as characters, colleagues, friends, and fellow performers.

In ‘Step Up: High Water’ Collette Jones (Naya Rivera) confesses to Sage Odom (Ne-Yo) that she could not kid anyone by saying she is unaffected and that, she misses the position she was once in which she had to leave when she got injured. The movie could elaborate on the said fact and give us more than just a glimpse of the remorse she felt and the effort and strength she had to show to give up on that and get up and be an assistant in the High Water performing arts academy in Atlanta. It could also emphasize on how Sage Odom (Ne-Yo) the legend was unable to produce any music for five years no matter how hard he tried and ended up in debt.

Since the story of the television series revolves around Janelle Baker (Lauryn McClain) and Tal Baker (Petrice Jones). The first episode of the first season begins with the older twin Janelle Baker (Lauryn McClain) rehearsing with her cheerleading group and the younger twin Tal Baker (Petrice Jones) looking at her train. They then get home to see their mother who used to be a drug addict and then became clean, being caught by police for a case related to drugs while realizing what just happened both the twins’ life gets thrown into turmoil. Janelle Baker (Lauryn McClain) believed her mother has been clean for around eight years and went into a denial phase when she realized she was not. They initially used to stay in Ohio but this very incident caused them to live with their Uncle Al (Faizan Love) in Atlanta since neither their uncle nor the pair of siblings wanted them to be taken over by foster care because they were both below the age of 18.

The twins were trying to settle down with their lives in this new town when Tal Baker (Petrice Jones) gets invited to a party hosted by Dondre (Marcuse Emanuel Mitchell) where he takes his sister Janelle Baker (Lauryn McClain) along with him where she eventually comes to know about the High Water performing arts school in Atlanta which was run by Sage Odom (Ne-Yo) and decides to join the school to which Uncle Al (Faizan Love) denied support. She still went ahead with the idea of joining the school even if she had to go up against Uncle Al (Faizan Love). Tal Baker (Petrice Jones) mostly supported her with her ideas of joining the school, but he also did point out at the fact that she was being selfish, that is, she only did what she wanted to without even thinking about anything else, she missed her mothers call that the siblings were supposed to take together, she did not pick up Tal’s (Petrice Jones) call when he was beaten up real bad and needed help because she wanted to look around the college with Rigo Octavio (Terrence Green) who she thought was attractive.

Even after all this she cleared 2 rounds of her audition and became friends with Odalie Allen (Jade Chynoweth) and Davis Jimenez (Carlito Olivero) and Tal (Petrice Jones) was left behind figuring out what he actually wanted to do while fighting his reasons for sorrow away. On the day of the third audition Tal (Petrice Jones) decides to suddenly show up at the school while he was running away from Marquise Howard (Terayle Hill) so as to not get beaten up, and requests to audition for the High Water performing arts school, to which Sage Odom (Ne-Yo) agrees to even when Collette Jones (Naya Rivera) denied it because he saw a glimpse of his past self who was helpless and had to take in every single opportunity that was thrown towards him to survive in Tal (Patrice Jones). Because of how exceptionally well Tal (Patrice Jones) danced he gets selected while Janelle (Lauryn McClain) doesn’t, to which she gets really upset and decides to leave, the story then proceeds from there to show how their life and dancing journey ends up to look like.

Well, as of now ‘Step Up 7’ is not announced and the fans are not sure about another movie coming out of the Step Up franchise so, there is no trailer for the movie.

Where To Watch Step Up 7 Online?

If a 7th movie was to be released by the ‘Step Up’ franchise it would probably be released on Netflix and will also be available on Hulu Plus following the past order of release. And if you still haven’t seen the ‘Step Up’ franchise you can go ahead and watch it on Hulu Plus and Netflix. Some of the movies are also available on Disney plus Hotstar.