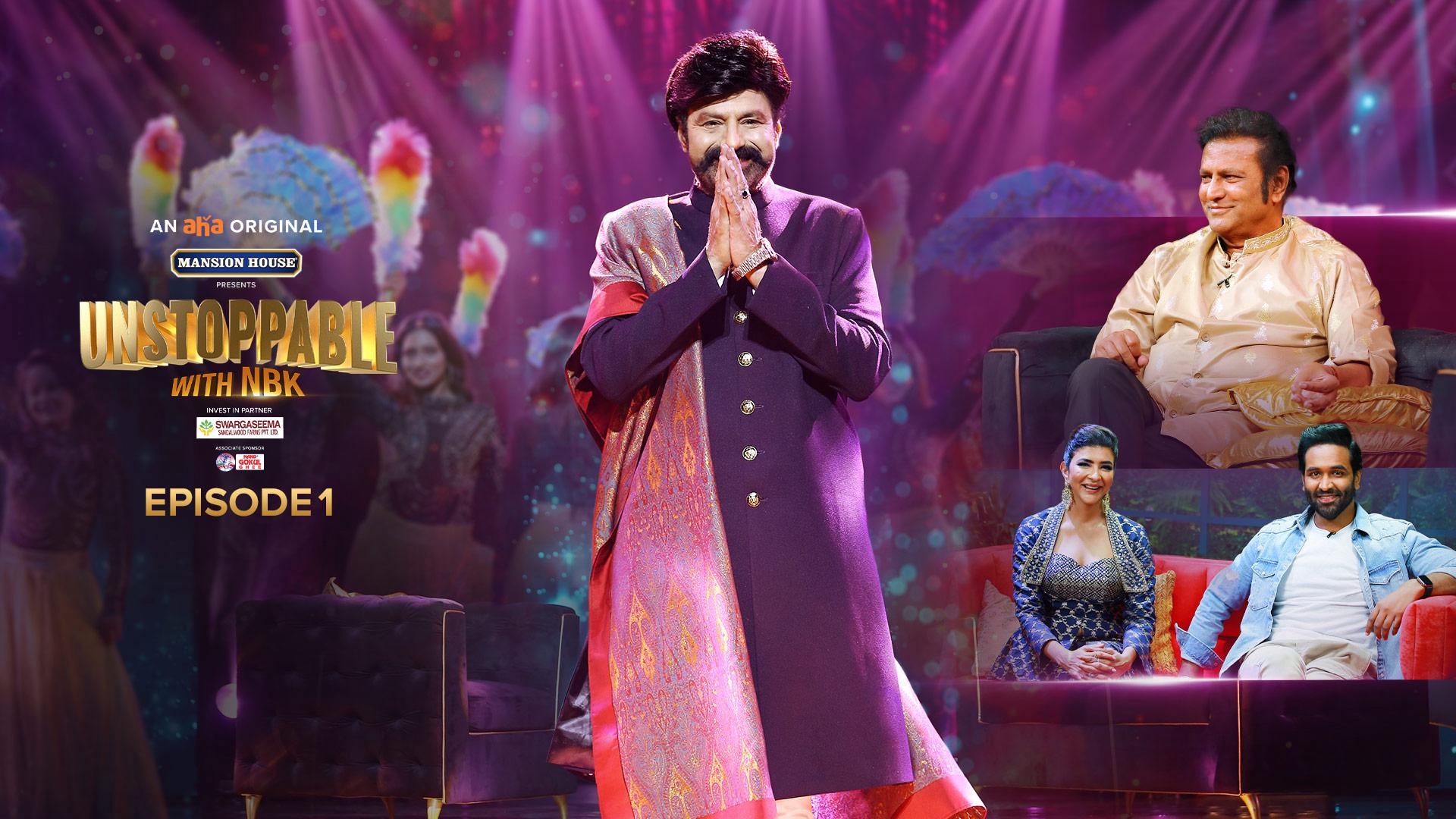 After Unstoppable 1 has been such a great hit, the makers are planning to release Season 2 sometime this month as signaled by the official teaser released a few days ago. Season 1 was streamed on November 4, 2021, and it is predicted that this season will begin in the same timeframe it began last year which is the time around Diwali, the most popular festival in India.

Season 1 was absolutely adored by the audience due to many factors and now, everyone has held their breath to witness Season 2 making rounds. The show wasn’t hosted at any of the popular OTTs but it was streamed on a pure Tamil/Telugu platform, Aha. Even though the show is based entirely on the Tamil/Telugu language, there are podcasts of this show streaming in languages like Hindi as well to reach out to the millions of fans out there who do not understand Tamil/Telugu.

The caption of the trailer released by Aha reads, “More fire in the questions! More dare in games! More satire in fun! More fun for you. Season 2 is streaming from October 14th, every Friday on Aha!”

Yes, the release date has been finalized! From this Friday, NBK will add the much-needed spice to our boring lives. The date has been announced officially and there will be no changes to the date. The show will stream on Aha’s official OTT platform and hopefully will be another hit.

With 12 episodes and multiple guests, the show has gathered a huge fan base. The show was broadcasted once a week for almost twelve weeks with the last one marking its finale. Arun Seshkumar directed the show while B.V.S Ravi wrote it. It is safe to say that the show won the hearts of millions of people in just twelve episodes. The audience has a right to be excited about the upcoming episodes and receive more juicy gossip.

Unstoppable or Unstoppable with NBK is a popular Tamil/Telugu talk show hosted by Nandamuri Balakrishna (NBK), a superstar Kollywood actor who has fans all over India and abroad. This show has had nearly 40 crore streaming minutes as the Aha platform claimed on its Twitter handle. It was the fact that it was NBK’s first appearance on a celebrity talk show that gave the show such a strengthening boost. This show has punches (not the ones NBK is generally famous for but the ones no one ever expected from him), fun, comedy, satire, and every element that is required to give you a happy hour. Moreover, it has some spicy gossip that will make your day!

S.S Rajamouli who is one of the most successful directors the Indian cinema has witnessed has made a grand appearance on the show. Stars like Rashmika Mandana, Mahesh Babu, and Allu Arjun were also part of it. These stars are considered to be the foundation of the Kollywood industry and each of them has a fan base of millions. It doesn’t come as a surprise that their fans want to know more about their personal life. Does this show reveal that to them, why wouldn’t be a success then?!

NBK (Nandamuri Balakrishna) is a Tamil/Telugu star who is nicknamed ‘Simba’ after his blockbuster movie titled ‘Simba’. Simba generally represents a tiger and NBK is famous for having a snarl like a tiger. He delivers some powerful dialogues, throws in quite a few punches, and is generally considered an action hero. Here, in this show, he showcases an entirely different side of himself, a side the audience completely loved. The fun part of him that the audience got to witness came as an unexpected surprise. It was part of the reason that made the show such a great hit. The first season of Unstoppable marked the first talk show debut of NBK. And this season will be his second talk show as a host.

A show as popular as Unstoppable should have a season 2 and though it wasn’t planned before, the makers are going to release season 2 this October. The show will continue its format with the same host but the guests would be new and the gossip would be fresh. The games and the questions will be different from the last season as well. And what else can the audience demand?!

The official trailer of Unstoppable Season 2 is now streaming on the official Aha website and their official Twitter handle as well. The fans are already crazy over it, the anticipation is running high. The trailer shows NBK in a cowboy look with a sword in his hand and a powerful sentence that makes the wait less bearable. He says, “Victory is unstoppable for a warrior who fights with the breath of victory” in his bold Tamil/Telugu accent that makes the audience swoon. Moreover, the trailer reveals some mysterious treasure and though we don’t know what the writers have planned for us, we are expecting a visual delight.

The designer of this theme, Prashant Varma, admits that he is an NBK fan and assures us that this season will be more successful than the previous one. Just the reassurance the audience wanted!

As soon as a trailer is out, the stream of predictions begins to roll down. This is the same case here as well, a lot of predictions have been going on ever since the authorities released the official trailer.

One such prediction is regarding the first guest of the show, will it be NBK’s brother-in-law and Telugu Desam party chief, Nara Chandrababu Naidu? Some sources claim that it would be the party chief and while it isn’t yet confirmed, there is no smoke without fire, right? Chandrababu Naidu and NBK were spotted on the seats of the show in some leaked photographs.

There are more than enough people who claim the first guest will be NBK’s brother-in-law while there are a few people who think Chiranjeevi would be the one claiming the spot before NBK on the premiere. Regardless, the excitement is running high and no matter who becomes the first guest, all the audience wants is to witness NBK questioning his brother-in-law, whether it be the first episode or the last.

Where To watch Unstoppable Season 2 Online?

The Unstoppable Season 2 anthem has also been revealed and the excitement is skyrocketing now! It is composed by Mahathi Swarasagar, sung by Roll Rida, and is getting fans more and more excited! And we are about to witness superstars like Chiranjeevi and Pawan Kalyan this season! Chiranjeevi is one of the finest actors Kollywood has offered to Indian cinema. One of the sources reported that NBK’s brother-in-law, Chandrababu Naidu, would also be one of the guests. Now, the audience is all the more excited to witness these many superstars sharing their experiences and being themselves on-screen instead of playing a character.

Watch all this drama unfolding on Aha every Friday!

Though the trailer is out, there are a few questions that are yet not answered. The audience as always are some curious souls that are always questioning, and the makers as always are people who never provide detailed descriptions.

Here are a few questions that the audience demands answers of:

What is the secret treasure the trailer is hinting at?

Will there be more episodes this time?

Though the last season was a super success, the episode count wasn’t nearly enough to sate the hunger for celebrity gossip we all have in us. Eleven episodes and one finale episode can never be enough, which is why the audience wants to know if there will be more episodes this time. More episodes mean more fun, more gossip, more laughter, and who wouldn’t want more episodes of this super juicy show?!

Would there be a cowboy-related theme in this season?

Ever since the trailers are out, this question has arisen in everyone’s mind. In the trailer, NBK is flaunting a cowboy look which has made everyone curious about this season’s theme. A season’s theme always gets a lot of attention and this one has certainly managed to gather lots and lots of attention. Cowboy theme hasn’t yet been chosen by any other Tamil/Telugu talk shows. If this show is set around this theme, it has already gathered a huge fan base that’s for sure.

Will NBK be more straightforward this time?

The talk shows are generally famous for their hosts and his/her way of talking and this particular show has won many hearts due to NBK and his unique style of questioning. As the trailer ends and NBK makes a grand appearance with a sword and his own swag, it has given rise to this question. The poster of the trailer consists of NBK royally sitting on a throne-like chair with a black revolver in his hand and also. The tagline of this season is set as ‘Debbaki thinking maaripovala’ which means ‘It must change the thought process. All of these clues are hinting at a dynamic, more straightforward, and more swag from NBK in this season of Unstoppable 2.