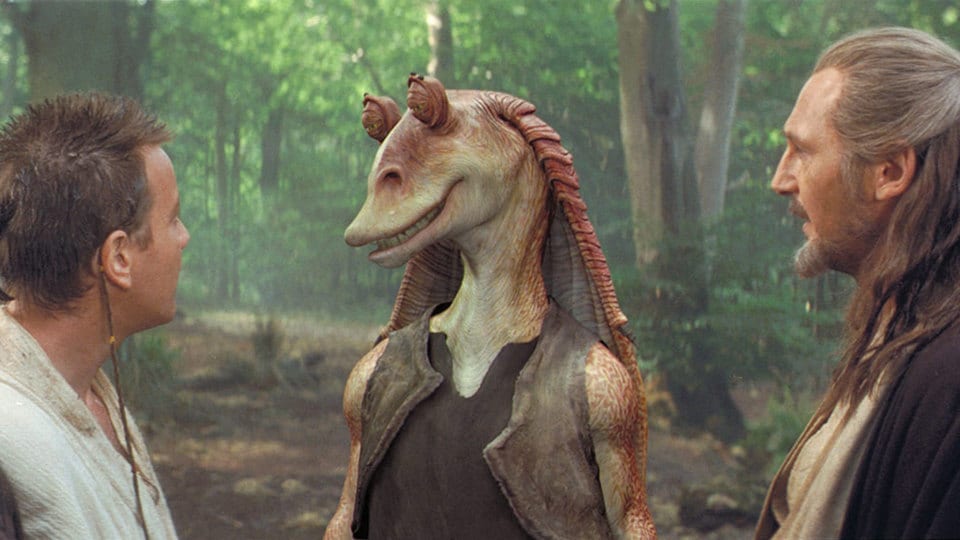 Now after a long time, we are back with some Star Wars content, and it is related to none other than the clumsy and always foolish-looking Jar Jar Binks. Quite a controversial character he has always been from what we have seen and the fan theories regarding him have just gone flooded over the internet, though considering that he is just a side character and that too in the prequel movie series of the star war franchise and not the main saga. Now many of you out here are very shocked right, if you haven’t been following the Star Wars universe for a long time, and aren’t very friendly with all the characters, movies, and all theories, then understanding all of this certainly will be very problematic. Though worry not we are here to solve the issue and provide you with as much help as we can. Starting with the first thing that we can do is brief you about Star Wars and what it is because there obviously are many readers who don’t know much about this mega universe created by our very favourite George Lucas.

Now Star Wars was just a random idea of George Lucas to start a science fictional universe, where many intergalactic stories will unravel and the adventures of the good vs the dark will continue and that is what George did by slowly expanding the Star Wars universe over time. Now one of the biggest concepts in this universe is The Force and to understand who the Sith lords are, we must understand what The Force is in this universe. The Force is basically a special type of power that exists in the Star Wars universe, which binds the entire universe together, according to some theory and on those, this force has many effects they end up having special powers which help them to manipulate various objects, use telepathy and many other things which we have heard only in books and science fictional movies.

The Star Wars universe is basically a universe in which aliens, robots, and human beings live together and there is extreme scientific advancement along with that intergalactic existence is normal in this universe. There are many vast cities with development whereas there are also complete deserts with no advancements and primitive tribes. Now as we have mentioned earlier there exists The Force, which is the main power in this universe, and based on this force there are mainly two groups of people, both these groups have one thing in common, that they are blessed by this force, and using their superpowers they either use it for the welfare of the society or they end up using their powers to get more power and spread fear and corruption. The ones who are the good ones and fight with the light are called the Jedi and the ones who are working with the dark and are corrupt are called the Sith lords which if translated means the dark lords. Now we hope the concept of Sith lord is clear.

Now after this let us brief you about the characters Jar Jar Binks. The Star Wars universe is huge and has been spread over a lot of series, movies, and many things. Now Jar Jar Binks is a supporting character and not a very important one, from what we have seen in the story so far and Star Wars came up with the prequel movie series which has three movies. Jar Jar Binks, is basically not a human but a different type of alien creature who comes from a tribe known as the Gungan tribe from the planet of Naboo. However, he has always been very foolish and clumsy which has ended him being all alone and in exile from his tribe.

Now in the three movies, he was included as an extreme comic character, who would make the situation much tenser, and in the first movie, he had a great role to play. However, with time and the fan response, his scenes also started to be fewer. This was mainly because of the fan hatred for the characters and how he behaved ruining the intensity of the entire scene. He has also appeared in some movies from the franchise and other works too. Now something that has gained a lot of attention is some fan theories regarding Jar Jar Binks and how he was a very important character, but the fan response changed the whole scenario, and coincidentally this theory was confirmed by the voice actor who dubbed his voice. To know all about the topic, do continue reading the article till the end.

Now that all of us are pretty well aware of who Sith lords are, we hope that you all are very relevant to who Jar Jar Binks is. Now the theory that has been in the talk is about Jar Jar Binks being a Sith lord, and from many sources and fan conclusions, we can say that yes, Jar Jar Binks was supposed to be a Sith lord. Let us see how, firstly we all know how clumsy Jar Jar has always been and maybe a person can’t be just this clumsy. His clumsiness at some point seemed artificial to many fans and from that comes the theory that the clumsiness can be a great disguise for a Sith lord, to infiltrate. Then we have also seen the relationship he has with Palpatine. We know that Jar Jar Binks had been elected as the junior representative of his planet in the senate and that gave him a position of political power, which could only be done with great connections and much manipulation, would our clumsy friend, be able to do this all alone? The question remains unanswered.

Other than this the entire plan of Palpatine which we have seen, how we wanted to take over the republic, with the help of an intergalactic emergency situation, and how many roles our Jar Jar had in the giving away of absolute power to Palpatine who soon ended up in the creation of the empire after the fall of the republicans.

Now other than this we have also seen that he has got extreme skills when it comes to physical agility though being clumsy and that was very well seen in episode 2 when he went to war and was asked to lead, he escaped many near-death moments by using many acrobatic skills, which though looked clumsy is the exact thing that any Sith lord would have been able to do. Now we will talk about the powers which are mainly people who have much influence from The Force. We are mainly talking about the Jedi or the Sith lords because we have seen them having powers where they use hand signals and movements to change people’s opinions and get them on terms with the user and if you would have closely noted the acts of Jar Jar Binks, you would often notice him use hand movements whenever he is trying to manipulate someone’s ideas or something like that.

Now lastly the biggest confirmation that Jar Jar Binks was supposed to be a Sith lord is this one. We all know how many haters; Jar Jar Binks has received throughout the three movies and many more works. Mostly all of his voices and everything were being dubbed by Ahmed Best and soon he was very shocked by the amount of hatred the fans showered the character with. He was very reluctant in doing the role and didn’t show much appreciation for the fans and soon in one of the interviews, it was confirmed by him that based on the fan’s reaction the story was changed and Jar Jar Binks who was actually supposed to have a big role and was supposed to be related to the Sith lords in someway was altered and thus he ended up being the clumsy funny character which everyone went on hating. This theory was not only confirmed by Ahmed Best but also at the same time confirmed by George Lucas, the living legend and the creator of the Star Wars universe.

Now as we are moving towards the end of the article, let us see where Jar Jar Binks appeared and what he could have done and wasn’t able to because of the fan hatred. We see Jar Jar Binks making his first appearance in the prequel first movie, the phantom menace where he led the Gungans army against the trade federation. Then we see him in the second movie, attack of the clones, where he played a very important role in granting the ultimate power to Palpatine which was the key for him to leading the foundation of the empire. In movie three he also played some silent roles, but that was not very significant.

Other than this in the clone war television series, of the Star Wars franchise, he played quite an important role and appeared almost in all episodes.

Where Can We Watch Star War Movies And Shows Online?

All the movies and shows of the Star Wars franchise are currently available for streaming on the Disney Plus streaming platform.

ALSO READ: When & Where Does Star Wars: Rebels Take Place?