Green Mothers’s Club is a Korean television series. The drama series is based on the friendship and bond of five mothers. These mothers come from different backgrounds and meet each other at an elementary community. They have their different personalities, their families, and their own different lives. The South Korean drama put a glimpse into various parts of the lives of these five ladies which include their friendship with each other, equations with family members, and most importantly motherhood.

Starting in April 2022, Green Mother’s Club is a small 16 episodes series. It telecasts twice a week in South Korea. Till now the 14 episodes of the series have been aired and now it’s time for episode number 15. Fans of the show are excited about the direction in which the show will end. Episode 15 will be full of excitement for the audience. But when will be the episode telecast on television? What will be the story and where it takes the show?

Green Mother’s Club airs twice a week which is on Wednesday and Thursday. The 14th episode of the show was aired on the 19th of May. Now the 15th episode will be aired on 25th May while the final episode will release on 26th May. The episode will be telecast at 10:30 PM KST or 07:00 PM IST.

As the Green Mothers’ Club is going towards its final episode, there is so much interesting you will find in episode 15. The story will continue from where it was left in episode 14. You will see Chun Hui struggling between her past and present. There might be more scenes of her with her ex-boyfriend. It will be interesting to find out where the story of these two goes.

Secondly, there will be a struggle for Rhea as she finds out that Seo Jin Ha knew about her equations with Luis. Geon is in jail now and as there is strong evidence against him, there is no chance of any relief for him. In all these scenarios, we will see Eun Pyo helping her friends by keeping her past aside. However, what new twists will come in the story is not revealed yet. And how the show will end is suspense.

We have seen a lot of drama in episode 14 of Green Mothers’ Club. Firstly, Chun Hui fought with her husband Kim Ju Seok who has become a drug peddler. She warns him to stop his illegal work otherwise she will end their relationship. She also left her children to Eun Pyo to protect them in difficult times.

In the other scene, Young-Mi gets the proof against her criminal husband Gun woo, who was later arrested by police. Gun woo is a film director and his arrest defamed him in the media. Further, Chun Hui’s closeness was seen with her ex-boyfriend Lee Man Soo, who is the father of her child.

The Green Mothers’ Club is a drama of friendship, motherhood, and family. Therefore, the lead characters in the show are all women. They have different personalities and different backgrounds.

The first mother is Lee Eun Pyo, who is well educated in French. The role is played by actress Lee Yo-won. The second mother in the show is Byun Chun-hee. She is a complete example of beauty with a brain. She keeps the information about everything and is also very pretty. Her character is played by actress Choo Ja Hyun. The third mother is Seo Jin-ha. She married a foreigner and has a son. Her character is played by Kim Gyu-ri. The next mothers are Kim Young-mi who has a very emotional connection with her child and Park Yun-jo who is a cousin of Lee Eun Pyo. The two characters are played by Jang Hye-jin and Joo Min-Kyung.

Apart from these mothers, their families are also shown in the show. The life story of mothers roaming around their families. You can also find the staff of the elementary community and a few other mothers in the story. They are the supporting cast of the show. But they all have a significant role in the show.

FOR YOU: When Will Our Beautiful Now Episode 16 Release Date Arrive? 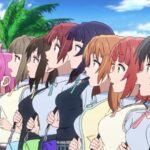