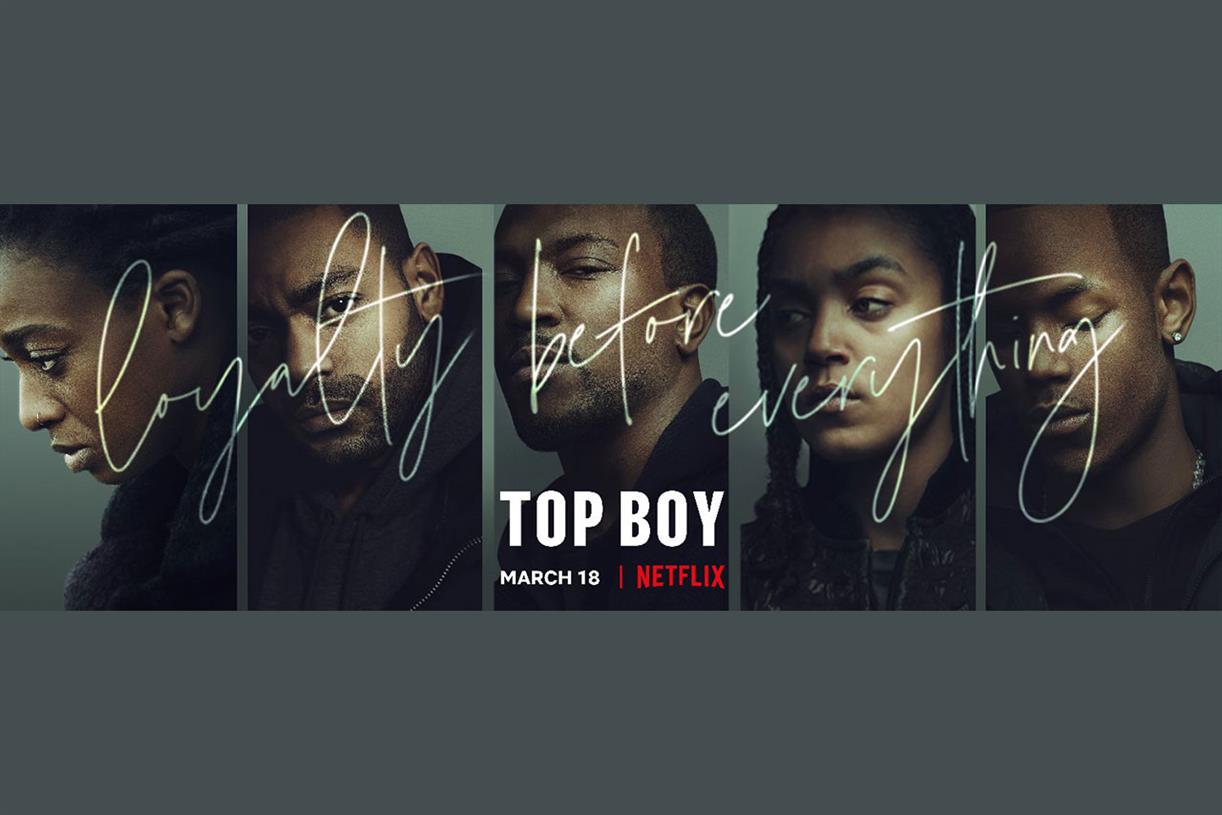 Top Boy is Tv crime drama series in the United Kingdom. The series is set on the fictitious Summerhouse estate in the London Borough of Hackney and was created and written by Ronan Bennett. On July 22, 2013, a DVD of the first series aired. August 20, 2013, a second series aired on Channel 4.

On September 16, 2013, the second series was released on DVD. Despite suggestions for a third series, Channel 4 decided to cancel the program in 2014.

The series follows the story of Ra’Nell’s anguish is portrayed throughout the series as he navigates the perils of living on the crime-infested Summerhouse property after his mom, Lisa, is committed to a mental facility. Given his reputation on the property for his bizarre behavior after killing his violent father, Ra’Nell is silent and closed-off.

While his mother is in the hospital, he is looked after by Leon, a close friend of his mother who used to be a renowned estate enforcer but has now put his past him. Meanwhile, Heather, Lisa’s acquaintance, enlists Ra’Nell’s assistance in growing a cannabis harvest to earn enough money to leave the estate and raise her newborn kid somewhere safer.

This amazing storyline and well-performed acting make this show worthy to binge-watch, but unfortunately, a show can’t run forever, so here are the likes of some television shows which might give you the taste and entertainment of Top Boy.

Unsolved is a real crime genre tv miniseries from the United States. The first season is based on the 1996 and 1997 murders of artists Tupac Shakur and Biggie Smalls. It aired on USA Network on February 27, 2018.

The Killings of Tupac and the Notorious B.I.G. is a 10-episode season that follows the simultaneous police investigations of Detective Greg Kading (Josh Duhamel) and Detective Russell Poole (Jimmi Simpson) into the infamous murders of Tupac (Marcc Rose) and Biggie Smalls (Terry Crews) (Wavyy Jonez).

This Tv mini-series is based on a book named ‘Murder Rap: The Untold Story of Biggie Smalls and Tupac Shakur Murder Investigators by Greg Kading. Netflix is providing the streaming service for the show.

ALSO READ: 12 SHOWS TO WATCH IF YOU LIKE THE NAKED DIRECTOR!

How to Sell Drugs Online (Fast)

Ok, if you are heartbroken, what do you do? Do you cry out the anger or make Europe’s largest online Drug market? How to Sell Drugs Online (Fast) television show deals with this story, Moritz Zimmerman, an outcast in high school, is left by his girlfriend, Lisa Novak, after she returns to Germany after a year abroad.

He sought the help of his friend Lenny Sandler to win Lisa back after learning that she has taken up ecstasy while her time in America and appears to have set her sights on high-school athlete Dan Riffert.

He tracks down Dan’s supplier, Jakob ‘Buba’ Otto, and purchases the entire quantity of ecstasy, hoping that Dan won’t have any for Lisa. Moritz later crashes Lisa’s party to reclaim her, only to be disgraced in front of the whole by Dan. Moritz, who is in debt to Buba and has a bag full of ecstasy, intends to sell them online. This show is currently available to stream on Netflix.

High School students, their life got stuck between the chaos of drug dealers and gangsters and now they are trying to get out of it. Eddie Gonzalez, Lauren Iungerich, and Jeremy Haft created On My Block, an American teen comedy-drama streaming tv show.

When Cesar is on the outs with Ruby and Jamal in the Freeridge neighborhood, four best friends, Ruby, Cesar, Monsé, and Jamal, are practically at the start of their high school lives.

After three months at a writing camp, Monsé searches for the cause of the conflict, which turns out to be Cesar’s revelation of Monsé and Cesar’s secret love affair. Cesar did this mainly to protect her from his brother, Oscar, who has been freed from prison and is pressuring him to join his gang, which Monsé challenges.

NEXT-READ: 12 SHOWS LIKE THE FAME GAME THAT ARE INTERESTING!

Flowers is a British black comedy-drama tv series starring Olivia Colman and Julian Barratt and written by Will Sharpe. Channel 4 in the United Kingdom commissioned it in collaboration with Seeso, an American TV streaming provider.

Giri/Haji or translated as Shame/Duty is a British television series created on BBC Two on October 17, 2019, in the United Kingdom, and was broadcast globally on Netflix on January 10, 2020. Joe Barton is the creator and writer of the series.

A Tokyo detective, Kenzo Mori, travels to London in quest of his brother, Yuto, who was originally believed to be dead. Yuto has been charged with the murder of a Yakuza participant’s nephew, which might spark a gang war in Tokyo.

Kenzo meets DC Sarah Weitzmann of the Metropolitan Police and Rodney Yamaguchi, a young half-Japanese, half-British sex worker, as he tries to traverse the alien environment of London to find out if his brother is alive and guilty. Kenzo must support his family back in Tokyo while hunting for Yuto in London. Kenzo’s inquiry puts him in contact with some of London’s most deadly criminals.

Hugo Blick wrote and directed the 2018 television drama series Black Earth Rising, which is about the trial of global war criminals. The series is a BBC Two and Netflix co-production. The show premiered on BBC Two in the United Kingdom on September 10, 2018, and Netflix began streaming it globally on January 25, 2019.

Kate Ashby, a legal investigator for Michael Ennis’ London law firm, is at the center of the story. When Kate’s adopted mother Eve embarks on a case against an African militia leader, Michael and Kate are dragged on a trip that will permanently change their lives.

Murathan Muslu, Peri Baumeister, Edin Hasanovic, and  Sahin Eryilmaz, star in Skylines, a German streaming television drama series developed by Dennis Schanz and starring Peri Baumeister, Murathan Muslu, Sahin Eryilmaz, and Edin Hasanovic. Hasanovic plays Jinn, a hip-hop rapper from Frankfurt, Germany, who joins the record company Skyline Records only to discover later that it is a crossroads for music and criminal enterprises. On September 27, 2019, Netflix released the first season. Skylines were terminated by Netflix after only one season.

The series takes place in the 1970s in the Bronx, New York City, and chronicles a group of teens as they witness the emergence of hip-hop and disco music. Each episode opens with MC Books, a well-known rapper who tells his narrative to a large audience during a 1996 concert. The short rap acts as a summary of prior episodes as well as a set-up for what’s to come. Real video and news broadcasts from the 1970s are intercut throughout each episode.

Luhrmann spent almost ten years planning the series, which was revealed in February 2015. “A mythic narrative of how New York on the verge of collapse gave birth to hip-hop, punk, and disco,” according to the description of the series. The Sony Pictures Television series is set in tenement houses in the Bronx, the SoHo art scene, CBGB, Studio 54, and the newly constructed World Trade Center.

The Salisbury Poisonings is a fact-based drama series starring Anne-Marie Duff, Rafe Spall, and Annabel Scholey that depicts the 2018 Novichok poisonings and sanitation crisis in Salisbury, England, as well as the Amesbury overdoses that followed. In June 2020, three parts of the series were broadcast on BBC One, while four parts were aired elsewhere. Adam Patterson and Declan Lawn created it for Dancing Ledge Productions.

On March 4, 2018, emergency personnel were dispatched to Sergei and Yulia Skripal, who had been discovered comatose on a park bench in the heart of Salisbury. When it is revealed that Skripal is a veteran Russian military intelligence agent who worked as a double agent for the UK’s intelligence services in the 1990s and early 2000s and that he and his younger sister were poisoned with a highly potent Novichok agent smeared on their front door handle, a national emergency is triggered.

Gangs of London is established in the heart of London, one of the world’s developed and multicultural cities, and describes the tale of the city of been torn apart by the volatile power struggles of the global gangs that rule it, as well as the sudden power gap created when the head of London’s most powerful crime family is murdered.

Finn Wallace was London’s most powerful criminal for 20 years. Every year, billions of euros passed through his hands. But he’s murdered now, and no one knows who ordered his assassination. With opponents on every side, it’s up to the rash Sean Wallace (Joe Cole) to take his father’s position, with the support of the Dumani family, led by Ed Dumani.