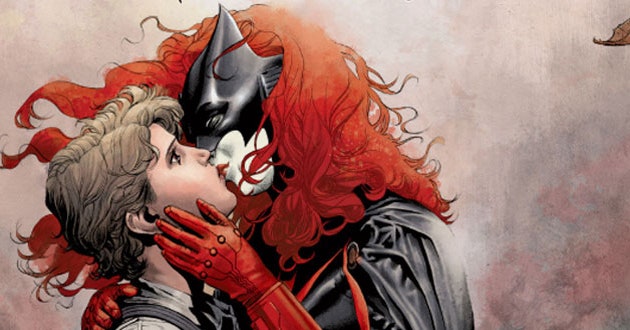 Kate Kane or Katherine Rebecca Kane is a wealthy woman from a Royal Family, who got inspired by Gotham’s Crimefighter, The Batman. She decides to be like him, by putting her wealth and money into the fight against crime in Gotham City.

Kathy Kane or also Katherine Kane was introduced to us as a love interest of Batman. In Comic addition to DC’s bold Comic ‘Seduction of the Innocent’ (1954), she was introduced as Batman’s girlfriend as of the raising allegation on Batman’s Homosexuality.

During the Silver Age of Comics, she got introduced to the world as Batwomen, Kathy Kane, for the first time, despite the mainstream pre-crisis of the DC Universe.

In the year 1996, a limited series of Comics names ‘Kingdom Come’ by Mark Waid and Alex Ross, presented Batwoman as an admirer of Batman from Jack Kirby’s Fourth World. Her costume is a little bit mixed Kirby-esque with the original costume. This character has a giant bat-winged dog whose name is Ace.

Vice President Brenna Wayne becomes Batwoman in order to stop Vandal Savage in Batman: Dark Knight Dynasty in the year 1997. Wayne discovers a conspiracy against her family after researching the last thirteen generations of the Wayne family.

Alan Davis’s JLA: The Nail (1998) portrays Selina Kyle as Batwoman after adopting Kathy Kane’s costume. Her own Batwoman costume appears in JLA: Another Nail in the year 2004. The alternate reality is part of the post infinite Crisis multiverse and is known as “Earth 11”, reversing the gender of the characters.

Kate Kane’s Batwoman was debuted back in 2006 in the series 52. During the teen Titans storyline “Titans Tomorrow” (2005), Bette Kane takes on the role of Batwoman wearing a costume. In the follow-up storyline, “Titans of Tomorrow… Today!” (2007), Bette Kane remains Flamebird and Cassandra Cane who was former Batgirl becomes Batwoman.

After the introduction in 1960 as a love interest of Batman, the Batwoman character faces many changes. Major changes were made in the 21st century after Batwoman got very famous.

After getting a television series on the CW, Batwoman receives wide recognition as this character highlights feminism. In the second season of the series, they introduce the character, Ryan Wilder. In that television show, Ryan and Kate came out as lesbians, both of them are each other’s love interests. Because of this gesture towards the LGBTQ+ community as they made a gay character, this series got famous.

So, on television we can say that Batwoman is a Gay character, but can we say that for comics too?

Well, if we go on to the history, Batwoman is a straight character but introduced to us as a lesbian on TV.

In the late 50s, when this character got introduced in the Silver Age of Comics. she was the first to enter the Bat-Family. The decision of including a female character was to make a love interest of Batman, as of the allegations on Batman that he is gay. In Batman #122, Batman and Batwoman get married.

But in the year 2006, almost after 30 years without Batman, She made a come back with some major changes. This time in 2006’s edition of 52 series, 52 #7, they restarted the journey of Kate Kane’s Batwoman. As we all know Kathy got killed in her last appearance, this was a good time to make a fresh start for Kate’s character.

Now, when they decide to make a return of Batwoman, they make various changes in the character. They shared her sexual orientations, as now she is gay, basically a lesbian. Now, Kate is also of Jewish descent, and the new Comic 52 #7 reveals that Kate is Bruce Wayne’s maternal Cousin.

So, modern Kate Kane or Batwoman is a Jewish lesbian. That means, Yes she is gay.