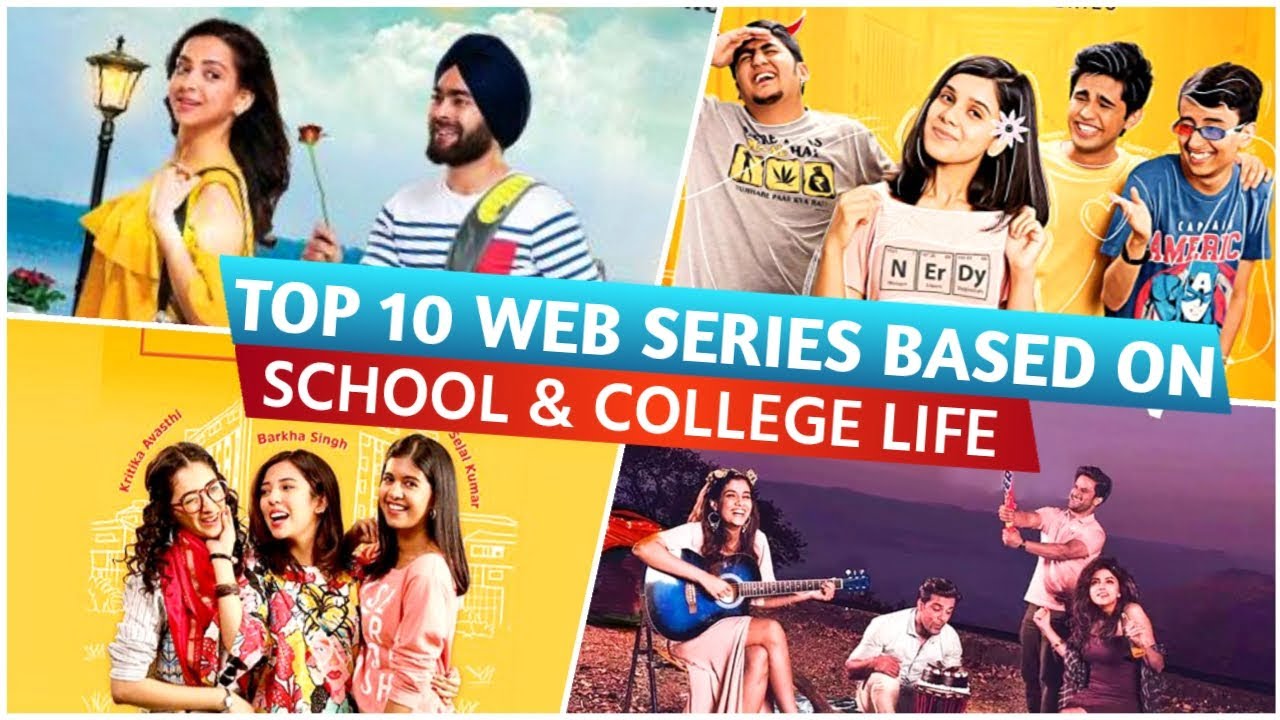 Memories of school and college are always hard to forget, no matter how much time has passed. Ultimately, this is the time when we experience all our firsts: Heartbreaks, crush, fights, mistakes, that turns into lessons in our life. School and college life are irreplaceable. Everyone remembers their school life and wants to live it again, which is impossible now. But here are some best college and school web series, that can definitely revive all those nostalgic school and college memories again.

ImMature is a Youth Comedy-Drama Hindi Web Series produced by TVF (The Viral Fever). The story of the web series revolves around a young boy Dhruv. He wants to grow up as soon as possible and tries to woo his crush ‘Chhavi’ along with his friends Kabir and Susu. The story of the web series shows a group of friends growing up and throws light on youth events. Watch tremendous web series only and only on Mx Player. The cast of ImMature is Omkar Kulkarni as Dhruv Sharma, Chinamay Chandraunshush as Kabir Bhuller, Visshesh Tiwari as Master Susu, Rashmi Agdekar as Chhavi Upadhya, Dilip Meralal, Komal Chhabria, Sameer Saxena, Indiuben Mehta, Jitendra Kumar, Vijay Rawal, Sachin Negi, Ranjan, Biswapati Sarkar, Nidhi Singh, Hamika Bose, Gopal Datt, Nikhil Vijay, Nasti Chavhan, Nidhi Bisht, Pradnya.

Kota Factory is the 1st black and white series and became very popular within a few days of its launch. Many types of memes are being made about its dialogues, which are being shared a lot on social media. Kota, the famous city of Rajasthan, is not unknown to children preparing for medical and engineering. With the distance from home, the burden of studies, and the pressure of good marks, there are many things that pressurize students. The cast of Kota Factory is Mayur More as Vaibhav Pandey, Urvi Singh as Meenal Parekh, Revathi Pillai as Vartika Ratawal, Ranjan Raj as Balmukund Meena, Alam Khan as Uday Gupta, Ahsaas Channa as Shivangi Ranawat, Jitendra Kumar as Jeetu Bhaiya.

The Timeliners’ series Engineering Girls is based on the college life of girls studying in an engineering college. Maggu, Sabu and Kiara are the three girls around whom the story revolves. They have their own personality. Maggu is having her final practical but her file is missing. Sabu is a prankster. She helps Maggu in getting her file while Kiara loves drama who fights for her place in the drama society. The trio comes together as the episode ends. The three actresses performed very well. A lot of web series show the drama of normal engineering boys. But The Timeliners’ has introduced a fresh concept where engineering girls drama featured uniquely.

College Romance is the story of three college best friends- Trippy, Karan and Naira. They fell in love, and their full of comedy love stories are told. Trippy and Naira are single at the beginning of the season, but they get into relationships. The most beloved character by everyone is Bagga(Gagan Arora), who uses his Delhi desi swag in the whole series. People really enjoyed his character. There are the coolest one-liners in all the episodes. Without even showing the students in the classroom, the series captured the essence of college life. They never attend the classes whenever they are in college. They are seen sitting in the canteen, either smoking or enjoying, which basically sums up college life.

Girls Hostel is among one of the best shows based on hostel life. It is a story of four girls living in a hostel. The web series shows the bond between roommates, juniors and seniors. Girls Hostel released in 2018 and its first season includes five episodes. The four girls belonging to diverse background become friends in the hostel. The series depicts the day-to-day lives of these four students. They deal with their personal issues together. From overbearing parents to eccentric wardens and some mean girls, they deal with everything.

Biswa Kalyan Rath created Laakhon Mein Ek, and OML Production produced it. The story revolves around Aakash who just finished his high school, and he is planning to opt for commerce in Raipur with his friends. Aakash wants to become an internet sensation, but his father sends him to an IIT coaching institute far away from Raipur as he has different plans for Aakash. Aakash finds him misfit in this whole other world as there is no fun here. People are so good at studies. Slowly, his roommates Bakri and Chudail become his friends. There is also his rival named Chandrakanth, who is the topper of the institute.

What’s Your Status tells three stories linearly. The story of three different characters going through 3 different relationship phases- single, committed and married. There is a college student who is about to experience his first love, there is a guy who suddenly finds that his love life was a nothing but tricky, and there is a young married couple who is happy with themselves. Prateek Prajosh, Amit Mishr and Madhur Agarwal are the three directors of the series. The stories are unconnected, yet they presented it excitingly. The cast of What’s Your Status is Manjot Singh as Baljinder Singh, Plabita Borthakur as Aisha Sharma, Kumar Varun as Gyani, Naveen Polishetty as TJ, Anish Victor as Sandhya, Abhay Mahajan as Bharat Kulkarni, Megha Burman as Shweta, Gurpreet Saini as Hemant.

The Reunion revolves around four best friends who meet after a very long time. The series brings back all the memories from the past and the interactions we have with our school buddies after leaving school. The four friends are Aarya, Deva and her husband, Gaurav, who are all school mates. As everyone is busy in their lives, they meet each other after a long time; hence their happiness and excitement are on another level. The Reunion cast is Sanghmitra Hitaishi as Kavya, Shreya Dhanwanthary as Devanshi Tailor, Sapna Pabbi as Aarya Singh, Veer Rajwant Singh as Gaurav Malhotra, Karan Ashar as Dastoor, Trisha Kale as Trisha, Taneea Rajawat as Sarika, Devina Medda as Bhavna, Karan Sharma as Arjun.

Operation MBBS is based on the journey of three medical students. The project also stars actress Sara Hashmi and Anshul Chauhan along with Ayush. Huma, Sakshi and Nishant are three MBBS Students who after initial conflicts become friends. Nishant is the notorious one as he is the son of a famous local doctor. Sakshi is a stubborn girl who belongs to a middle-class family and struggles to become a doctor. Huma is a brilliant student who couldn’t get into AIIMS. She gets 4th rank in the first-semester exam, and Sakshi gets 1st rank which develops jealousy in Huma, leading to conflicts among the three.