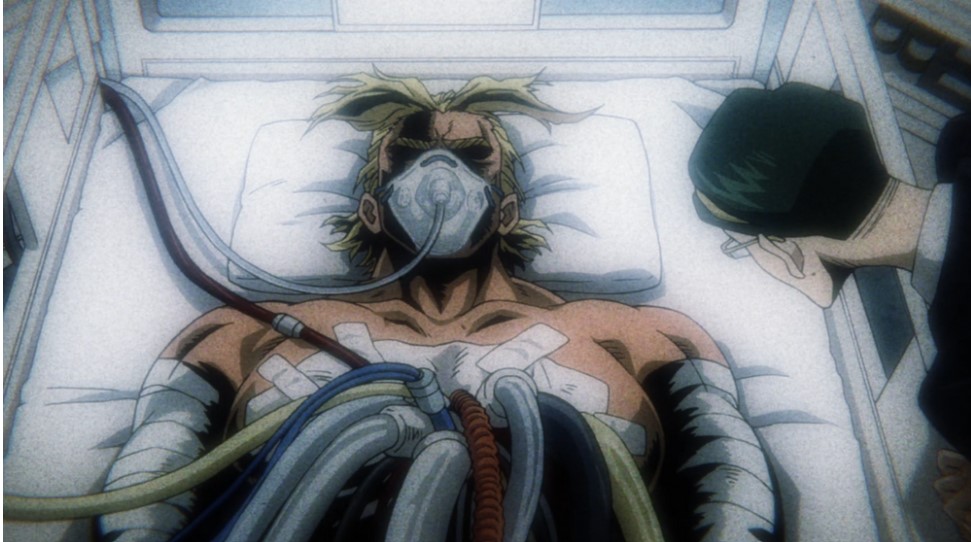 All Might, also known as the Symbol Of Peace to the world, always had to live a complex life since he decided to take over that title; it was impossible for him to lead a healthy and everyday life. However, this did not deter him from taking on the job he had set out to do. All Might, also known as Toshinori Yagi, was granted the One for All by his mentor, Nana Shimura. Nana believed that Yagi had the mental capacity to defeat the All for One, so she put her faith in him. And, Toshinori did fare well through her expectations, and he proved himself worthy of all the powers granted to him. However, he did fall in rough times; following the war arc, the entire My Hero Academia world started falling apart.

Since its inception, My Hero Academia has been about different generations of heroes, with Class 1-A aspiring to be professional crime fighters to protect the innocent, but it’s clear that these same young students have risen to the same level as the heroes they once admired. As is often the case in storytelling, All Might’s death would pave the way for Deku to become the new Symbol of Peace and replace Endeavor as the number one hero, with Shoto’s father still dealing with the consequences of his past sins.

In the final battle in the Shonen Franchise, which is the final one, it will probably wholly pass the torch from Toshinori to Izuku Midoriya. All Might took the fall for All for one in the final battle and transferred the central part of his quirk to Deku.

Though there was a prophecy that he would leave his mortal wires a few times, the final battle served as a hint as to whether he might die or survive after a tough fight. The fight was indeed a tough one, and he did struggle against the villain because he had to be careful and had to protect the random people who were trapped by the debris in the area. However, he did manage to lock up his nemesis in Tartarus.

He officially retires after this. This means he does not die. Toshinori Yagi, also known as All Might, is alive both in the anime and the manga. However, he has used all of his quirks because of the All For One battle, and the power was all in the hands of Deku. Certain predictions have been that All Might might be confronted by some villain and die. That might be a real possibility, considering he has no power anymore.

ALSO READ: Best Lewd Anime Of All Time That You Should Not Miss!

What Was All Might’s Quirk?

Toshinori Yagi and Izuku Midoriya were the only two people who later inherited the One For All but were born without any quirk. Deku has been shown to struggle with One for All. Even using a portion of One for All’s power has been extremely taxing for him from the start, despite the months of training he has received. But, Toshinori was able to use it from the very beginning. He has also been lauded as a natural genius. Toshinori did not become All Might by accident. He needed to be trained by someone, and his early training came from Gran Torino, who used his strength and experience to help teach All Might and shape him into the hero he is today.

All Might was also the number 1 Japanese hero before retiring. After retirement, he decided to become a teacher at U.A. High School to teach foundational hero studies.

My Hero Academia is a famous Japanese manga series, which has been adapted into an anime series with six seasons, and the sixth one is currently being aired. It was written and illustrated by Kohei Horikoshi. It is set in a world where everyone is born with certain superpowers. These superpowers are called Quirks, and the story mainly follows a boy named Izuku Midoriya. Izuku was born without a quirk, but that did not deter him from trying to become a superhero himself. He was being helped by All Might, who was the biggest superhero at that time. All Might started training him after realizing he had a lot of potential.

Both manga and anime have received numerous awards, including the Sugoi Japan Award and the Harvey Award for Best Manga, as well as two nominations for Anime of the Year at the Crunchyroll Anime Awards.

MUST READ: Toru Hagakure Face Reveal: What Are Powers And Abilities?