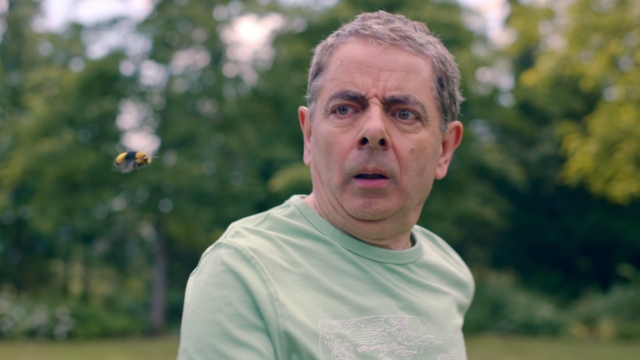 Man vs Bee is a new comedy series released by Netflix on 24 June 2022. It is a short comedy series with 9 episodes. The show stars the very famous Mr Bean actor Rowan Atkinson as Trevor Bingley. The show is receiving a lot of fame due to its unique plot and also the fact that it is the return of the Mr Bean actor. It has been 15 days since the release of the show and there are rumours that the show is based on a real story.

Man Vs Bee is a story of a homeless guy named Trevor to finds a job in housekeeping in a big Mansion of a businesswoman. But you are wrong if you think his job is going to be easy. There is a mischievous bee in this mansion who causes a lot of trouble in his life. As a result, Trevor ends up in the courtroom for all the trouble he has caused in the mansion while fighting with the bee

Imagine watching a bee and a man against each other. The plot doesn’t sound realistic but watching the series is a lot of fun as we see how a small insect-like bee can cause such big trouble in a man’s life. This series shows us how little things in life can make a big impact on a man’s life and take us on a whole new journey.

Is Man Vs Bee Real Story?

The series is written by William Davies. William Davies is a screenwriter and a film producer. Some of his famous works as a writer include Twins, The Real McCoy, Alien Autopsy, Flushed Away and How to Train Your Dragon. He has also produced some of his self-written movies. This is not the first time that William Davies and Rowan Atkinson are working together. They also work together on other projects like Johnny English. In an interview with a British comedy guide, Rowamentionson that during the initial phase of the series the idea of a mischievous bee was not a part of the plot line.

The initial story of the series was about a man who needs a job and finds an opportunity of being a house sitter in a wealthy couple’s mansion. The initial phase of the series focused on how a man who doesn’t have any idea how to take care of a house will do the job in the Mansion which is filled with precious and lavish objects.

The makers thought that it would be fun to make a series on a man who causes damage and destruction in a big mansion because of his lack of knowledge about the job. Later the writer came up with the idea about a bee in the mansion who causes trouble in the man’s life as he is always behind the bee to catch her, unintentionally despite leads to a lot of destruction and damage because which the man is sued by the owners of the house.

Atkinson also expressed how difficult it was for him to shoot the scenes with The Bee. As there was no bee during the shoot and Atkinson had to imagine that there is a bee and act like that. He expressed that it was really difficult for him to imagine something that was not even there and then act all frustrated and angry because of The Bee. But no doubt the legendary actor from Mr Bean has done a phenomenal job in the series even after so many challenges that were thrown at him as an actor.

Many people have Drone comparisons between Atkinson’s Mr Bean character and Trevor Bingley. But Atkinson believes that the two characters are very different from each other and cannot be compared. Although he did a comic role in both the series, there are a lot of differences in the character and story.

Even though the series is not based on a true story the Amazing comic timing and performance by the cast have made it a big hit. Viewers loved watching this light comedy show. The concept of the series is very unique and new which feels fresh to watch. All 9 episodes with short and crisp showing How the man battles with a bee.

ALSO READ: 22 Funniest Episodes Of Family Guy That Will Make You Laugh!

As mentioned before, the show casts the very famous Mr Bean actor Rowan Atkinson as the main character Trevor Bingley. Apart from him, we can see Jing Lusi as Nina Kolstad, Julian Rhindtutt as Christian Kolstad, Tom Basden as the police officer, Claudie Blakley as Jess, Greg McHugh as the gardener, and India Fowler as Maddy. This wants the entire cast of Man Vs Bee to look like.

As the now, there is no update regarding the renewal of season 2 from the makers. The viewers of the show have enjoyed season 1 a lot because of its unique comic timing and fabulous performances by the cast. Looks like both the on and off-screen team of man versus bee did their best to make the show successful. The viewers liked the series so much that now they want it to be renewed for another season.

Season 1 was a short comic series which had just nine parts with a short running time. Usually, this kind of series is only made for one season and doesn’t get renewed. Moreover, the ending of season 1 didn’t feel like it needs another season. The ending was satisfactory and looked like the end of the series. After looking at the story and the ending it feels like there is not much to offer if more episodes are created. There is no official confirmation regarding the renewal of the series from the makers although the huge success of season 1 may lead to the renewal of season 2.

If the show gets renewed for season 2 then there are many ideas that the makers can use for the episodes of the show. As we said that the finale episode of season 1 was a perfect ending for the story of Man Vs Bee and there is not much that can be added. The makers might expand the franchise of the show by coming up with a new comedy theme and plot which will also be in a form of short series. However, one thing that can be kept in common in both Seasons is the performance of Rowan Atkinson which was loved by the viewers.

It is also possible that the whole cast of season 1 is repeated in the season but the plot of the show is changed while the genre is kept the same. After the huge success of season 1, there are great possibilities that the makers will come up with something new related to Man Vs Bee. If something like this happens and we get a season 2 then it is sure that viewers are going to be very excited and the makers will not disappoint their audience. We hope that another season of the show is released soon for its fans and it is as entertaining as the season was.

Where To Watch Man Vs Bee?

Man Vs Bee being Netflix’s original series can be watched only on Netflix. All 9 episodes of season 1 were released altogether on 24 June 2022. Many people also binge-watched this show and all the episodes were released by Netflix together in one day. If you love comedy series which are short and crisp then