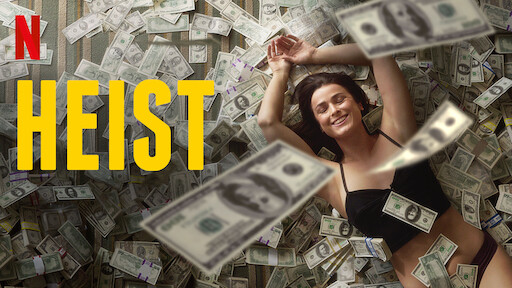 Heist: The Great Robbery of Brazil’s Central Park is a Brazilian crime documentary tv series, written and directed by Daniel Billio, with Rodrigo Astiz serving as general director and research led by Claudia Belfort. The series gives insights into the heist, along with testimony from the police, criminals, and various unseen archival footage.

The documentary lights on the robbery that took place inside Brazil’s Central Bank, where the robbers enters the bank’s vault through an 80 meters long tunnel and escaped with more than 160 million reais. With just 3 episodes the series has managed to show the entire investigation followed by unexpected details from the heist along with its aftermath.

If you enjoyed watching money heist then you’re going to love this documentary, though money heist is purely fictional this isn’t so you might be wondering is it even possible? Yes, it is, you can watch the series yourself to get a better insight into what happened. People have started taking interest in more real-life incidents than corny movies and Netflix is well aware of that, that’s solely the reason why Netflix is investing so much money into documentaries these days.

Is Heist: The Great Robbery Of Brazil’s Central Park Based On A True Story?

Yes, the series is based on one of the biggest heists around the world. The heist took place in 2005, inside the central bank of Brazil located in Fortaleza, in the state of Ceara, Brazil. The robbers entered the vault of the bank through a digging tunnel inside the bank and robbed 170 million Brazilian reals. The investigation then led to 36 arrests for 133 crimes. After the entire investigation, only 8 million reals were recovered.

The robbers managed to evade the robbed amount by disabling the bank’s internal alarms and sensors, and the heist remained undiscovered until the bank opened for business the following Monday. The entire heist was planned three months before the actual robbery, the robbers rented a commercial property around the bank and tunneled 78 meters to enter the vault of the bank. They even renovated the entire place to make it look like they’re selling artificial grass and other sorts of plants. According to the neighbors they used to remove loads of soil, but they didn’t see this coming as they thought this might be related to their business.

After the investigation the case got a whole lot Messier it seemed like the money put a curse on them. The police acquired some of the amounts from the robbers, many of them who were involved in the case died and some of them got kidnapped and the culprit asked their family for ransom, few involvements were found in the case in which some were police themselves, former security guards involvement was also found.

Is Heist: The Great Robbery Of Brazil’s Central Park A True Story?

Heist the great robbery of Brazil’s central park story introduces the viewers to one of the greatest robberies of the world. A group of robbers digs a tunnel to make a passage to the bank in Fortaleza, Brazil, and made their way through the vault and successfully stole over 160 million reais. The massive amount of the Heist took the spotlight in every news headline back then and become one of the greatest robberies.

The entire documentary unfolds different insights of the robbery, the money was never meant for them even though they successfully managed to escape with the massive amount the money ruined their life and none of them was able to get away with it. The police managed to find many of the culprits, some of them were dead before they could find them, rest were kidnapped. The documentary mainly focuses on testimony by the police department and the culprits themselves.

The series has managed to reproduce every aspect between the robbers and the investigation department throughout 5 years within just 3 episodes. It was one of the greatest bank thefts that ever took place in Brazil as well as in the world. The series uncovers unforeseen insights regarding the heist, as well as its terrible results. It seemed like the wrongdoing, however, lead to many unfortunate events among the robbers, kidnappings and murders continued afterward, persuading even the actual robbers to think that the amount was cursed.

Where To Watch Heist: The Great Robbery OF Brazil’s Central Park?