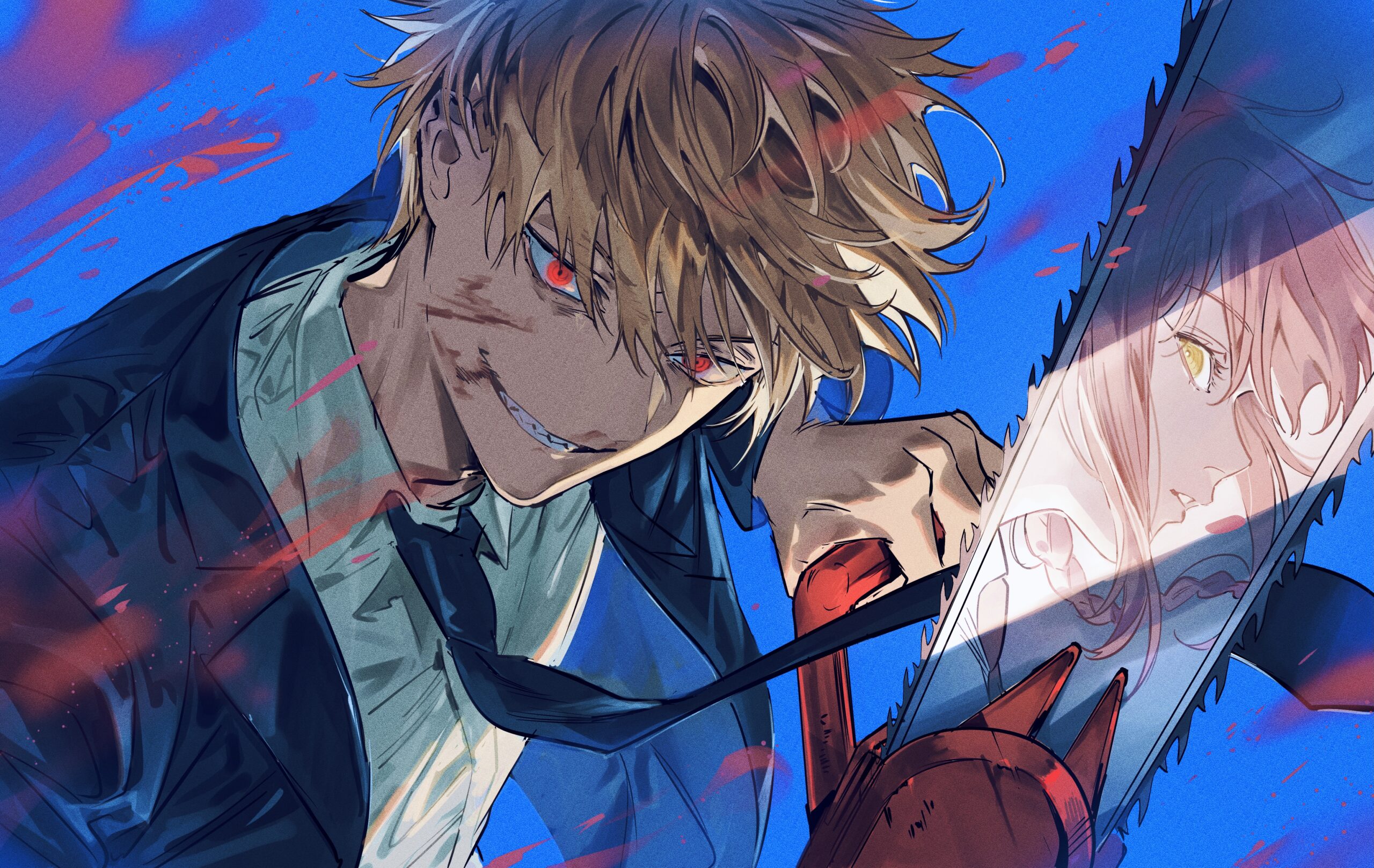 Anime is now getting a new market in the world. They have reached several international boundaries winning the hearts of so many people. Be it My Hero Academia or Re-Life, anime is creating much buzz among people. One such anime series that falls under the category of amazing series is Chainsaw Man. Firstly, it was a manga but later on, we received an anime adapation.

Chainsaw Man is the anime adaptation of a 12-volume manga of the same name written by Fujimoto Tatsuki sensei which was published in Shueisha’s Shonen Manga Magzine (Weekly Shonen Jump) from December 2018 to December 2020. The story is about a boy named Denji who was leaving a life of suffering for he was made to pay off the debt of his dead father by the yakuza (criminal organization; its literal translation is good for nothing). Denji’s life escalates when he meets a creature, he considered a low-level devil dog who later on turned out to be the manifestation of one of mankind’s worst fear, the fear of chainsaws.

Chainsaw man follows genres like action fiction, comedy horror, and dark fantasy. It piques one’s curiosity in ways not easily defined. It is ranked #41 and it has a popularity rank of #4 with a score of 8.75/10, that is, more than 80% of the viewers liked the plotline of the anime. It was reviewed as an intense, exceptionally paced, and well-animated series. Though it does have some terrifying scenes or heart-wrenching incidents as we could call them, which not every viewer would be comfortable with so it is mainly suggested that viewers be 18+ and mentally capable before reading the manga or watching the anime for the respected series.

Chainsaw Man like the other short animes would probably have a couple of seasons with twelve episodes each until it covers the plot of the manga. This basically means there definitely will be a 2nd season for the Chainsaw man anime series even if it is not yet announced by the official crew.

It was decided and confirmed for the manga to get a live adaptation at the beginning of 2022 and it started airing on the 12th of October 2022. It is a serialized anime and it releases an episode a week. The second episode of the first season of the series is scheduled to release on Tuesday, 18th of October 2022. And since it is going to be a 12-episode per season series it would probably be ending in the last week of December 2022.

All the manga readers were happy from the core when Mappa announced an anime adaptation of the series and the fans were happy because Mappa is one of the studios that make the animation look worth the wait. Mappa has been at its peak ever since it animated the later seasons of Shingeki no Kyojin (Attack on Titan).

Since it would be the continuation of the same story which is broken into arcs based on certain incidents season 2 of the series would have the same characters as that of the first with some new character introductions.

The first season of the series would cover about 36 to 40 chapters of the manga depending on the number of chapters they adapt in one anime episode. That is, it would be covering the Intro Arc, Bat Devil Arc, Eternity Devil Arc, and the Katana Arc if no filler arcs were to be included. That basically means the second season will probably include the storyline revolving around the Bomb Girl Arc, International Assassins Arc, and the Gun Devil Arc.

The storyline for the first season would probably be:

Denji a 16 to 17-year-old boy is an orphan now and leaving a life of labor for the yakuza trying to pay off the enormous amount of debt his father left him. After the death of his father Denji comes across a devil dog and names it Pochita and he feeds him a little of his blood which basically works as a contract between Denji and Pochita that Pochita would help him through odd jobs to earn money. But when the yakuza saw him as of no use he was betrayed by the yakuza and killed by the zombie devil, that is when Pochita and Denji sign another contract where Denji offers Pochita his heart and Pochita becomes his heart which brings him back to life as a devil-human hybrid a Chainsaw Man (as Pochita was a Chainsaw Devil).

After he was reborn, he ends up meeting with Makima who is a high-ranking Public Safety Devil Hunter and offers to hire him and provide him a place to stay, food to eat, and a salary as well. These were some of the offers Denji could not say not to so he joins them. That is where he meets some other characters like Power who is the Blood Fiend and meets other members of the special division like Aki. The special division is the only division in the devil hunter’s association that has hybrids, fiends, and humans with contracts with a devil working together to hunt demons.

Everybody in the special division tends to work in pairs and Denji was partnered with Power, they scout around the city and kill the Sea Cucumber Devil and causing quite some trouble, later she shares how she was recruited and how she could not save her cat with Denji. Later on, it is shown that the major task of the special division is to scout for parts of the Gun Devil and use them to find the other parts so as to kill it as a whole. So the 4th division sets off into a hotel where they end up facing the Eternity Devil. Later in the series, Himeno and Aki end up fighting the Katana devil where she gets fatally wounded so she offers herself to the Ghost Devil whom she had a contract to kill the Katana man.

The storyline for the second season would probably be:

Probably in this season, Denji would meet a girl he ends up liking just to find out in the later parts that she was the Bomb Devil and was using him for the betterment of the one she serves: the Gun Devil. The series becomes more and more happening when a bunch of infamous assassins come by to indulge with our main leads. Then there is the Gun Devil arc where the fight against the Gun Devil just begins to grind even more especially when Makima decides to reveal shocking facts about the same.

This is the basic outline of the arcs in the manga and the anime will probably include some fillers.

The series is written by the Fujimoto Tatsuki sensei who was also the mangaka for Fire Punch and some of his other works included one-shots like Niwa ni wa Niwa Niwatori ga ita (There Were Two Chickens In The Garden), Seigi no Mikata (Sense Of Justice), Kami Hikoki (Paper Planes) and multiple others. He won a Jury Special Award at the 3rd Shueisha’a Crown Newcomers’ Awards in 2013. He was also the creator of Koi wa Momoku (Love Is Blind) which won him an Honorable Mention Award at Shueisha’s Crown Newcomers’ Awards.

His manga Chainsaw Man topped Takarajimasha’s Kono Manga ga Sugoi! List of best manga of 2021 for male readers and won the 66th Shogakukan Manga Award for the Best Shonen Manga in 2021, the manga proceeded to win the Best Manga Award in Harvey Awards as well.

Chainsaw Man is Fujimoto Tatsuki’s best and most appreciated work to date.

READ NEXT: Konosuba Season 3 Release Date Is Not Announced!

Why Should You Watch Chainsaw Man?

Some of the reasons one would love to await and watch Chainsaw Man would be the top-notch action it showcases and its dark humor.

The critics amended it for the violence it has successfully portrayed. The crew has filled in every little detail in every scene, which makes it even more intense and meaningful when one watches it.

For non-manga readers, the trailer was made in a way that would catch the attention of anime viewers who are into dark-fantasy-fiction animes with a little tint of horror-comedy. It also gives us a glimpse of the devil and the devil hunter format the series follows which is a teensy bit similar to that of Jujutsu Kaisen (Sorcery fight) anime. The trailer also enlightens us with the fights we could expect to see in the series while also showcasing its art style and animation efficiency.

Since season 2 of Chainsaw Man is yet not announced it is not available to binge anywhere. But when it would be announced it would probably be made available on Crunchyroll like the first season of the series.

And if you haven’t yet watched the first season of the series you can watch it on Crunchyroll now. It releases one episode every Tuesday and has only released one episode till now, so there is not much to catch up on and if you’re a person who doesn’t like waiting for the next episode then you can wait for 2-3 months after which you can binge the entire season without having to wait.

MUST READ || When Is My Hero Academia English Dub Season 6 Release Date Coming?