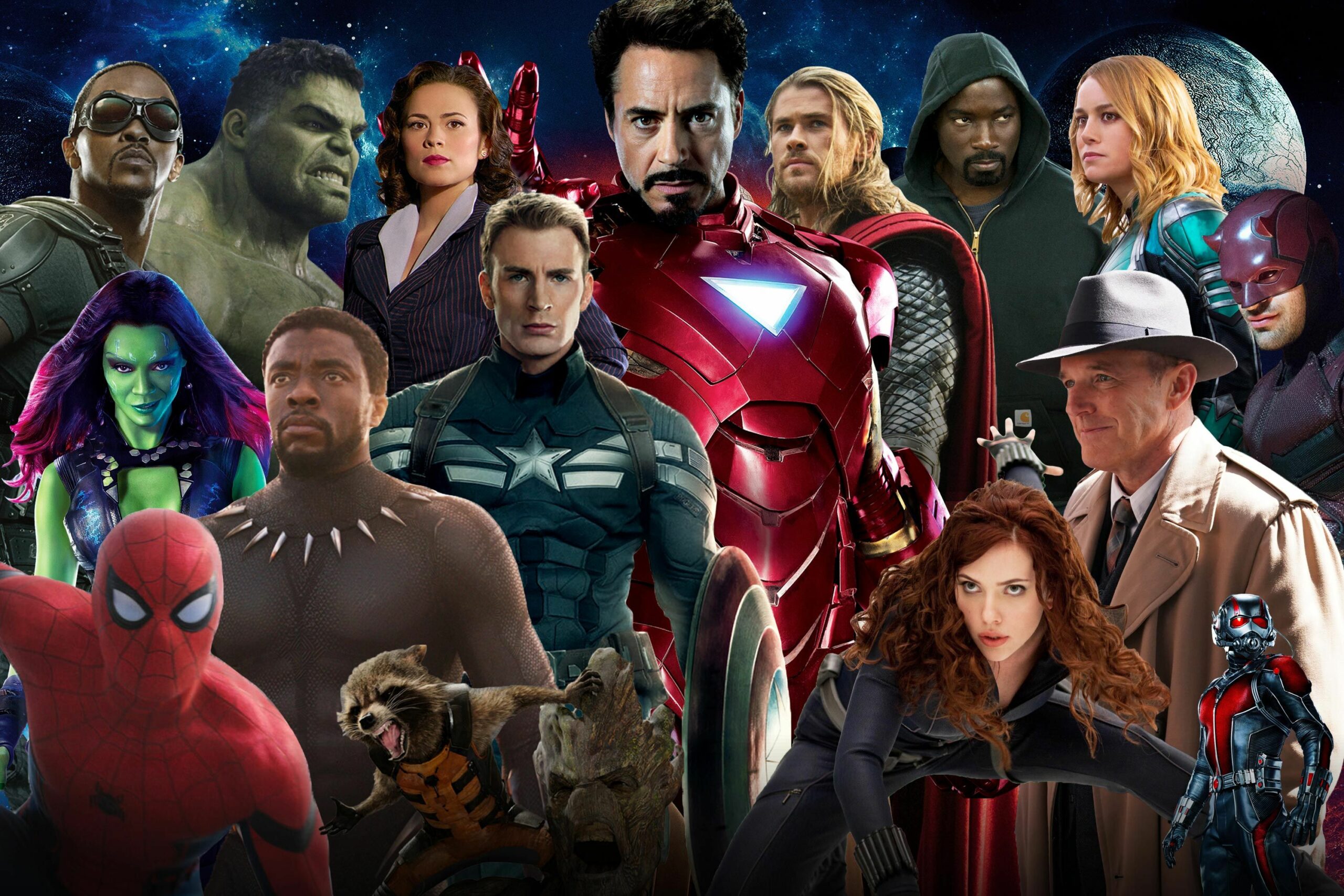 Who doesn’t know about Marvel movies, and their cool characters and actors, even if you are not a fan of Marvel movies it is hard to ignore them, because whenever there is some news about Marvel movies or anything, it is trending at the highest spot, as it should, to be fair. Founded by Avi Arad and Toy Biz, on 7 December 1993, which was 28 years ago by the way, Marvel managed to stay relevant and create the hype, because of their great concepts it is hard to ignore them, till now Marvel has created 29 films and television series, ranging from IronMan to Thor and WandaVision to She-hulk: Attorney At Law. They have also given us great actors such as Chris Hemsworth, Robert Downey Jr, Chris Evans, Paul Rudd, Matt Damon and many more, also great actresses such as Scarlett Johansson, Elizabeth Olsen, Brie Larson, and many more, they all are great people and actors in itself, but after working with Marvel it has become their brand names, and why they should not be.

Marvel movies earn billions in just some hours, for example, Avengers: Endgame which was released in 2019, earned 2.44 billion USD, at the box office whereas its production cost was 356 million USD, and another Marvel movie Avengers: Age Of Ultron earned 1.15 billion USD, with a production cost of 250 million USD. When the movie has a high budget and is able to earn billions, it is obvious that the actors who have worked in the movies will have a high paycheck, and Marvel actors are kind of known for their high paychecks. The question is who is the highest paid actor, and we will answer just that in this article and many more about that person.

Which Marvel Actor Is Paid The Most?

If someone is a Marvel actor, a hefty check in their name is obvious, so no matter if the amount is high or low, it is definitely a lot, when you compare it to other Hollywood celebrities. Actors such as the Guardians of the Galaxy actor Chris Pratt and the Captain Marvel actress Brie Larson got a check of 5 million USD, respectively. Whereas Doctor Strange or the really dashing Benedict Cumberbatch got a paycheck of 6.8 million USD, and Paul Rudd as Antman was able to earn 8 million USD. The Hawkeye actor Jeremy Renner and the Hulk Mark Ruffalo and the Captain America actor Chris Evans got a check for 15 million USD for their work. Black Widow actor Scarlet Johansson and Thor Chris Hemsworth were able to earn 20 million USD. But who has the highest paycheck?

Props to you, if you have guessed it, so the most paid actor is *drumroll* none other than Robert Downey Jr who got a whopping 75 million USD for his work in Avengers Endgame, that makes him the most paid Marvel actor. He received 20 million USD upfront and when we add the box office percentage it all adds up to a total of 75 million USD. Robert Downey Jr or RDJ, whom fans like to call him lovingly is an iconic part of the Marvel Cinematic Universe, we all love him 3000. With him the MCU is where it is right now, Iron Man came in back in 2008, and his work in that movie made him the favorite character and actor of Marvel, and also Kickstarter the journey of Marvel Studios.

Robert Downey Jr has not just worked in one Marvel movie but a lot of them, if you have followed his work religiously like us, you would know, but Robert Downey has worked in a lot of Marvel movies of Marvel., so let’s see what his salary was in every MCU movie. The answer is here, number one Iron Man in 2008, for that he earned 500,000 USD, Iron Man 2 in 2010, for he earned 10 million USD. The Avengers movie in 2012 got him a high in his salary because for that he was paid 50 million USD, and Iron Man 3 in 2013 got him a paycheck of 50 million USD. For Avengers: Age of Ultron which was released in 2015, he got paid somewhere between 50 to 70 million USD, and Captain America: Civil War got him a paycheck of 64 million USD, in Spider-Man: Homecoming he had the role of around 10 minutes and he earned around 10 to 15 million USD. His highest-paid job is Marvel’s Avengers: Infinity War in 2018 and Avengers: Endgame in 2019 for which he earned 75 million USD.

We all just got to know that Robert Downey Jr is the most paid actor at Marvel, and that made us wonder about his net worth. When you earn more than 70 million USD from a single movie, the net worth definitely has to be high. Robert Downey Jr has a net worth of 300 million USD and lavish properties such as his seven-acre, ocean-facing mansion in Malibu, which he bought for 13. 4 million USD in 2009. He also has a beach house in Venice, which he bought for 5.7 million USD. He started his journey with MCU in 2008, and for that movie, he earned roughly 500,000 USD, and his present paychecks, tell everyone about his hard work and how long he has come.

Robert Downey Jr was born on 4 April 1965 in Manhattan, New York. He is the son of Robert Downey Sr who was also a film director and actor, and his mother Elsie Ann was also an actress. Robert Downey Jr’s childhood was rather tough, his father was a drug addict and because of him he started using marijuana when he was like 6 years old, his father regretted that he was the one who introduced him to drugs. He made his film debut in 1970 with the movie Pound when he was just five years old, when he was 10 years old he moved to England and learned ballet.

His parents divorced each other in 1978, and Robert Downey Jr decided to move to New York again for his career in the movie industry. Till 1996 he had a marvelous career, with movies such as Heart and Souls, Chances Are, Chaplin, and Only You, but after that his addiction started to affect his career, during the time of 1996 to 2001, and he was in jail for a number of times, for reasons such as drugs and gun possession, he also gave a lot of money in jail, was fired from numerous projects because of his reputation and when he could not attend the rehearsals and meeting because he was in jail. One time he was seen walking barefoot and police found him after doing some checkups. It was found that he had consumed cocaine. After five years of tumultuous journey of substance abuse, jail, fake diagnosis, and also bad press, Robert Downey Jr started to make a comeback, after the rehab he was sober, and he has been sober since 2003. After that, he did a number of films such as Gothika, Zodiac, Iron Man, Marley and Me, and Tropic Thunder. Soon he will be seen in the movie Oppenheimer, and  Play Dirty.

Robert Downey Jr dated Sarah Jessica Parker from 1984 to 1991 but they both parted ways because of his drug addiction. He married Deborah Falconer in 1992 and had a son Indio Falconer Downey in 1993, but because of the trips to rehab, jail, and drugs Deborah Falconer decided to leave him and take his son, they both filed for a divorce in 2004. Then he met his current wife Susan Downey, on the set of the movie Gothika, in 2005 they got married in a Jewish ceremony, and they both have two kids Exton Elias, who was born in 2012, and their daughter named Avri Roel, who was born in 2014. He says that because of his wife and family he has been sober for so many years now, he also says that things like therapy, yoga, and martial arts helped him. Robert Downey Jr believed in a lot of cultures, he describes himself as a Jewish Buddhist, and he also took part in Christian activities as well as Hinduism, he has been interested in the Iskcon Mandir’s Hare Krishna movement.

Robert Downey Jr also likes to follow a vegan diet, and he has an organization that works against the carbon footprint and climate change.

MUST READ: Is Brahmastra A Copy Of Marvel Multiverse?