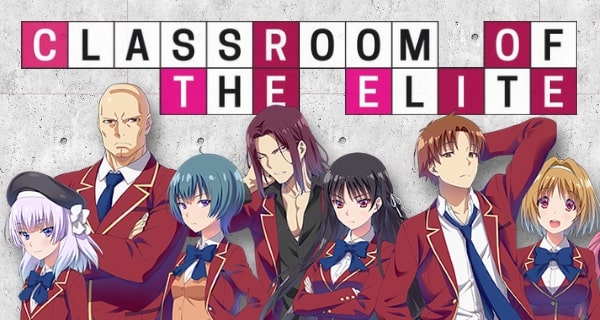 As we have already known Classroom Of The Elite has been one of the most popular anime series in the last few years and manga readers have known this series for quite some time because the manga from which this series has been adapted has been extremely popular. However, something that many of us may not6 know is that classroom of elite anime was actually adapted from the light novel with the same title and that came out much before the manga series came out. The manga is actually an adoption of the light novel series. This series has been created by Shogo Kinugasa and we have yet only received only two seasons of the show, and many more seasons are still to come. now coming to the reviews of the show. This anime series has received quite all positive remarks from the critics, and the reviews of the fans have also been quite good. The show has got a worldwide fan base and the upcoming seasons of the show have seen quite a lot of anticipation from the fans. There have been a lot of questions regarding the upcoming seasons already and the ratings of the show have also been quite great.

The light novel series from which the show has been adapted came out in the year 2015 and soon we received the manga adaption from the light novel in 2016 which is still being continued. The anime series of the show finally made it to us with the first season in 2017 and since then we all have been waiting for quite some time now for the second season of the show to release. Though it was already confirmed in 2021 that we will be receiving the second season of the show in 2022, it took quite some time and is finally making its release on the 22nd of July 2022, and now we have also received a green flag for the third season of the show. Thus we can expect that it will be soon entering the making process. From the Wikipedia page, we have known that the third season of the show will make it to us by 2023 but based on our sources and the production time an anime series generally takes, we think that there will be a delay and we won’t this anime anyhow before 2024. However, things may go the other way and it completely depends on the maker’s team.

Classroom Of The Elite Season 3 Story

The main story that has been followed in this series is actually set in the future. The government has set up a completely different school to nurture the growing up generation and the most elite generation who are supposedly going to carry the burden of the country on their shoulders. Now in this school and mainly in class d of the school, which is the class where mostly all inferior students who are not up to the mark in this generation are placed and comprise of Kiyotaka. Kiyotaka is actually a genius and one of the most intelligent students in the school and soon we see how he gets exposure and how he deals with the complex world of the school of this generation. Overall, the story goes on getting complicated and there are new twists and turns in every episode.

Classroom Of The Elite Season 3 Trailer

As we have already mentioned we have only received a confirmation that there is going to be a third season of the show, but we still don’t know when we will receive the third season and we also haven’t a trailer for season 3 yet. The trailers for the previous season are currently available on the YouTube platform

Where Can We Watch Classroom Of The Elite?

The season of the show just like the other two seasons will be available on mostly all online anime streaming platforms, and for the earliest update do keep an eye on the Crunchyroll platform.