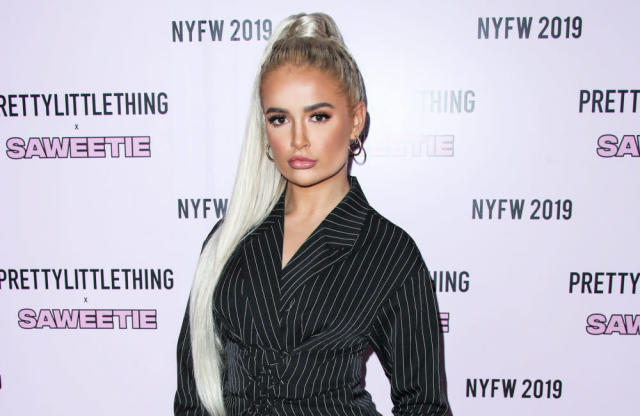 Molly Mae Hague is a very famous social media influencer and a television actor. She is famous for her the amazing fashion and Lifestyle content that she creates on her Instagram account. She is known as the fashion Guru. Her style and sense of fashion are loved by people.

She gained Fame in her appearance on the dating reality TV show Love Island. She was on love Island and became a television personality after that. Apart from this, she has also been the creative director of Pretty Little Things. The famous social media influencer was born in Hitchin on 26 May 1999. Her father was a police officer. She also has one sister.

In her teenage, Molly was always into beauty and fashion. She participated in various beauty pageants. As a teenager, she has also been crowned as Miss Teen Hertfordshire in 2015. She was also the World Teen Supermodel UK in 2016. After appearing in the dating reality show Love Island Molly’s career accelerated not only as a social media influencer but also as a television personality. She started gaining fame and people started recognizing her style after which she established her name in the industry.

As of 2022, Molly’s net worth is 3 million US dollars. The primary source of income is the passionate content that she creates on Instagram and brand promotions. The model has a huge fan following on Instagram of over 7 million. She also has her own YouTube channel where she creates fashion and lifestyle-related videos. Her YouTube channel has about 1.6 million subscribers. So we can say that she is quite a social media sensation and makes a lot of money from her amazing content. At a very young age, she managed to gain success with her determination, hard work, and talent.

Molly Mae’s first relationship was when she was 14 years old with Rory Shooter. The couple met in 2014 and fell for each other while they were teenagers. They were pretty open about their relationship and used to share a lot of pictures of their time on their social media account. After three years of relationship, they broke up in 2017. Rory went abroad for higher studies while Molly focused on her career after their breakup.

After her breakup in 2017, she started dating the professional footballer James Maddison in 2019. Their relationship didn’t last. They broke up before Molly entered the reality show Love Island. During her appearance on the show, Molly shared that she has been on dates with a lot of footballers and athletes. She keeps getting DM on Instagram from a lot of professional footballers. However, she never shared or discussed her relationship with James Maddison so we can say their relationship was not that serious.

It is said that she started dating Nathan Dawe one week before she entered Love Island. They were also seen on a date before Molly entered the show. However, the relationship ended very quickly but the two of them still share a friendly bond and keep in touch.

Molly-Mae Hague is currently dating Tommy Fury. The couple met in 2019 when both of them participated in the show love Island. They started liking each other while they were in the show and even after the show the couple continued to see each other. It has been three years since both of them started dating and we must say they are going quite strong. Because of their strong and intense chemistry, the couple was loved by the audience and gained a good fan following.

It is said that both of them moved in together quickly after the show got over. They have also talked about having children together. Recently it is speculated that the couple has been engaged. Fans noticed Molly Mae hiding her left hand in her recent Instagram post. While her boyfriend Tommy Fury also admitted that he might propose to Molly very soon. After having a long dating history and a lot of dating experiences it looks like Molly has finally found the love of her life and she will soon be married to him. They are one of the strongest couples in the history of Love Island. After witnessing the start of their love story the audience is ready to witness the perfect happy ending of their story.

ALSO READ: Ophelia Nichols Net Worth: This Personality Shocked Everyone!