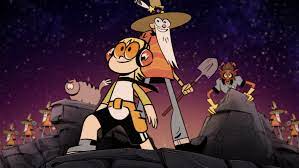 Craig McCracken has been just giving us more and more childhood fun and not stopping with his beautiful gifts. After the Power puff girls and wander over yonder, Craig went to Netflix and brought out his new cartoon series called kids cosmic and we see what? This too is being loved by the children and many times the adults who sit by with their children and end up watching those funny episodes, now after two seasons of absolute entertainment, and the children’s completing all the previous season episodes, the question arises about the third season of the series.

The great news here stands as kids cosmic has been renewed for the third season and the premiere date has also been announced which is in the first week of February, but it also comes with a piece of bad news from Craig’s side this is going to be the last season of the kids’ cosmic series. Yes, a bit heartbreaking for the kids but we should all remember that Craig never stops gifting us with new cartoons and we will receive something amazing soon.

With the confirmation of the third series from the makers and Netflix, we have also received the final dates of the premiere for Kids Cosmic season 3, the dates are confirmed to be the 3rd of February 2022. Yes, just a few days more for the kids to start enjoying their favorite show again. This season is also expected to have a total of 6 episodes according to our sources and that will be the conclusion to the entire series of kids cosmic. the first season aired on February 2, 2021, and since then it has been a great ride for the kids, just after the first season the show went for renewal of two more seasons, and here we are approaching the end of the amazing series. The episodes of the upcoming season are also expected to have a runtime of about 25 minutes each if it follows the previous season patterns. Craig McCracken truly made our childhoods beautiful.

Season 2 start at Mo’s oasis which now serves as a diner and Kid is now working as a delivery boy with his telekinetic abilities, with all this going on we see Fantos hatching an evil plan and taking away Kid’s telekinetic stone and then we see jo’s entry into the second season where she is meses her responsibilities as a leader in the challenge of pyramids puzzle of pain but with the help queen Xhan and her mother’s counseling, she manages to make her mistakes right. We also see a heist in the middle of the season where the local heroes are unsuccessful in their heist. Jo also takes part in an intergalactic wrestling show where she ends up teaming with Krosh and disbands the local heroes because she assumes Krosh the wrestling champion is the only one worthy of being her partner.

By the ending of the season, we see Erodius attack on Mo’s oasis and Krosh’s betrayal against jo then with the help of the local heroes again jo ends up fighting erodius and blowing up Mos oasis and stopping it from destroying the earth. By the end, we also see the thirteen stones to be scattered all over the earth and the local heroes get the new name as the global heroes and start searching for the thirteen stones.

With only 6 episodes of Kids Cosmic season 3, we can expect it to be about the new global heroes team finding out the thirteen stones from the surface of the earth, we also may see the coming back of Erodius and a final battle may take place between the new global heroes and Erodius for saving the earth. That will mark the peace of the galaxy and the local heroes possessing all the thirteen stones. that’s how the show will probably come to an end.

The show’s third season being titled the global heroes has already received a trailer from the makers which is a great hit among the fans. Just a few days for the third season to premiere and till then you can surely enjoy the previous seasons that are available on Netflix.