A Karen Maine-directed series ‘Starstruck’ gained popularity for its unique concept of comedy. This series really challenges the comedy stereotypes in modern pop culture. Starstruck is a British Comedy Drama series that premiered on BBC Network and on HBO Max for streaming.

Starstruck season one first aired in the UK on April 26th, 2021 on BBC1. Before premiering on BBC1 it got available on BBC iPlayer for streaming. TVNZ screened this series for New Zealand and ABC TV for the Australian audience. Later on, HBO Max stream this show for the public of the United States of America.

The idea of this series came to Rose Matafoe’s mind in a real scenario. Sidi and Matafoe were real life flatmates in London. The plot was inspired by a group of Matafoe’s Kiwi friends who met a Hollywood actor in a London pub one night and hang out with him all night. Filming had been scheduled to begin in March 2020 but was delayed in part by the COVID-19 pandemic until October 2020.

After a successful first season, Starstruck is not going to stop yet. Thanks to the creators and cast they didn’t take much longer to announce the renewal of the series for the second season. Yes! The second season is going to happen. The creator Rose Matafeo took her Twitter to give this good news that season 2 is on and will hit your Tv and streaming screens next month. She also posted the first look of the series’ second season. This series will be available on BBC3 for the United Kingdom’s audience and on HBO Max for the United States and other international audiences.

So, it’s good news that season 2 is happening and will release very soon, Next month according to the creator.

After the announcement, fans are expecting a trailer for season 2 but there is no official update on the trailer. We’ll provide the trailer link or any other update related to starstruck on this page, so make sure to stay tuned to us.

New Zealand woman thinks she slept with a famous movie star on New Year’s Eve after a one-night stand in Hackney, London. After the one-night stand, she is fired from her job as a nanny.

In Starstruck there is an awkward streak. Not in the forced, festival of cringe kind of way, but in the way that two people genuinely don’t know how they feel about each other. The pauses and goofy silence filters are part of the fun, too.

In this romantic comedy, Jessie (Rose Matafoe) and Tom (Nikesh Patel) start out on the uneven ground with an “unglamorous bathroom sink” as their chosen place to have a one-night stand. However, when Jessie realizes that Tom is Tom Kapoor, she gets a surprise when he turns out to be a luxury brand endorsement. Instead of engaging everyone in her circle in a new infatuation, Jessie keeps Tom’s number in her phone as “Tom Famous” and largely continues living her life as before.

Following a night with a guy she predicts she will never see him again; we see her dancing through a London neighborhood the morning after. Jessie’s friends who know about her memorable starts to the year know that she also has the confidence and impulsive nature to explore other options as she chooses. Jessie’s inner circle is already bolstered by people who have known her for years at the start of “Starstruck”. That’s because Tom is pretty much the only new person she meets.

She has a close relationship with her flatmate Kate (Emma Sidi) and the supervisor at her part-time job as a nanny (Sindhu Vee), who gives Jessie a stern rebuke when she slips into excessive self-destructiveness.

READ MORE: Everything You Need to Know About Tehran Season 2 Release Date! 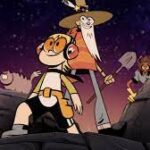