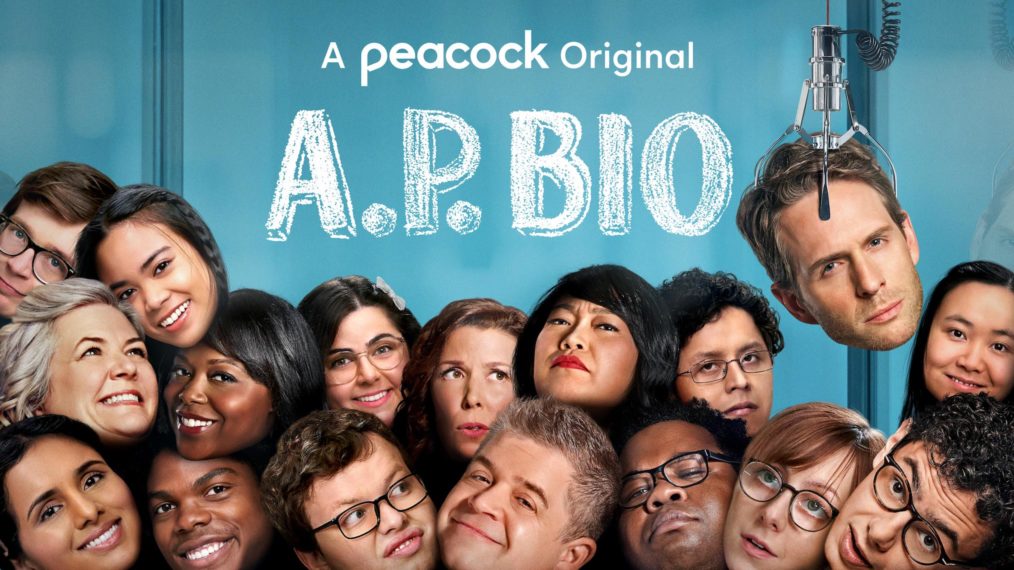 Have you ever thought about what A.P. Bio is? It is the short form of Advanced Placement Biology. Well, I didn’t expect it. I thought about every possible reason for the creators to come up with this title. But I didn’t think it to be the short form of a subject. AP Bio is the American comedy series created and directed by Mile O’Brien. The series has a total of 42 episodes (4 Seasons) with a running time of 22 minutes each.

The first episode was released on February 1, 2018. Season 1 and season 2 were aired on NBC, and season 3 and season 4 were aired on Peacock. The series focuses on the humorous relationship between students and a professor at Whitlock High. The professor, Jack Griffin uses his students to take revenge on the people who have wronged him. The creator has really put a standard for all the professors to get some inspiration from Jack Griffin. Come on, students don’t want anything more than an amazing teacher who is more like their friend than a strict teacher.

The four seasons of A.P. Bio literally gave us stomach aches (of course, by making us laugh). The first season was aired on February 1, 2018. The show really portrayed a beautiful connection between students and a professor. The audience accepted the humor series and was desperately waiting for the next season. But unfortunately, the series got canceled at Peacock.

The creator Mike O’Brien said that he was sad to announce the bad news, that season 4 will be the final season and there won’t be a coming back. In other words, there won’t be a season 5. But he adds that he is fortunate enough to work on this series with an amazing cast and crew. He is happy and grateful for the audience and fans who continuously supported him throughout the series. The series came to an end on September 2, 2021.

The story takes place in Los Angeles, California. The story is about Jack Griffen, a philosophy professor at Harvard. He loses his dream of being at Harvard, by losing to his rival Miles Leonard. After losing his job, he was forced to return to his hometown in Toledo, Ohio. He then joins at Whitlock Highschool as a professor in Advanced Placement in Biology. He clearly gives instructions to the students that he won’t be teaching them Biology. As the days pass by he notices that his class is full of brilliant students. So he decides and makes a plan to use them against his rival, Miles.

Throughout season one, we can see how he executes his plan and takes revenge on Miles using the students. As the first step, he asks the students to stalk Miles on social media. They all enjoy the plan of taking revenge though they don’t know the whole story. But soon he starts to concentrate on other things in his life, the students teach him to enjoy being at Toledo. Meanwhile, Miles gives him an offer to write a book in philosophy, and Jack tries to use this as an escape ticket from Toledo. But, his emotional attachment towards his students made him stay in Toledo. In season 2, he uses his students to gather information for him to write a book. He uses his student to understand how people in Toledo find happiness. He gets a feeling that making those into a book will make it the best-selling book.

Glenn Howerton as Dr. Jack Griffin, Lyric Lewis as Stef Duncan, a history teacher who is friends with Jack, Mary Sohn as Mary Wagner, an art teacher, Jean Villepique as Michelle Jones, a health and home economics teacher, Tom Bennett as Miles Leonard, a philosophy scholar and professor at Stanford University who is Jack’s rival, Paula Pell as Helen Demarcus, Principal Durbin’s secretary, Patton Oswalt as Principal Ralph Durbin, the principal of Whitlock High School, Jacob McCarthy as Devin, a quiet, brooding student who Jack calls “Prince of Darkness”, Tucker Albrizzi as Colin McConnell, Collette Wolfe as Meredith, Aparna Brielle as Sarika Sarkar, an overachieving teacher’s pet who usually opposes Jack’s schemes, Nick Peine as Marcus Kasperak, the student council president who is in the AP Bio class and other students of Whitlock High. All these characters together made us laugh throughout the series.

MUST-READ: IS MY BEST FRIEND ANNE FRANK BASED ON A TRUE STORY?