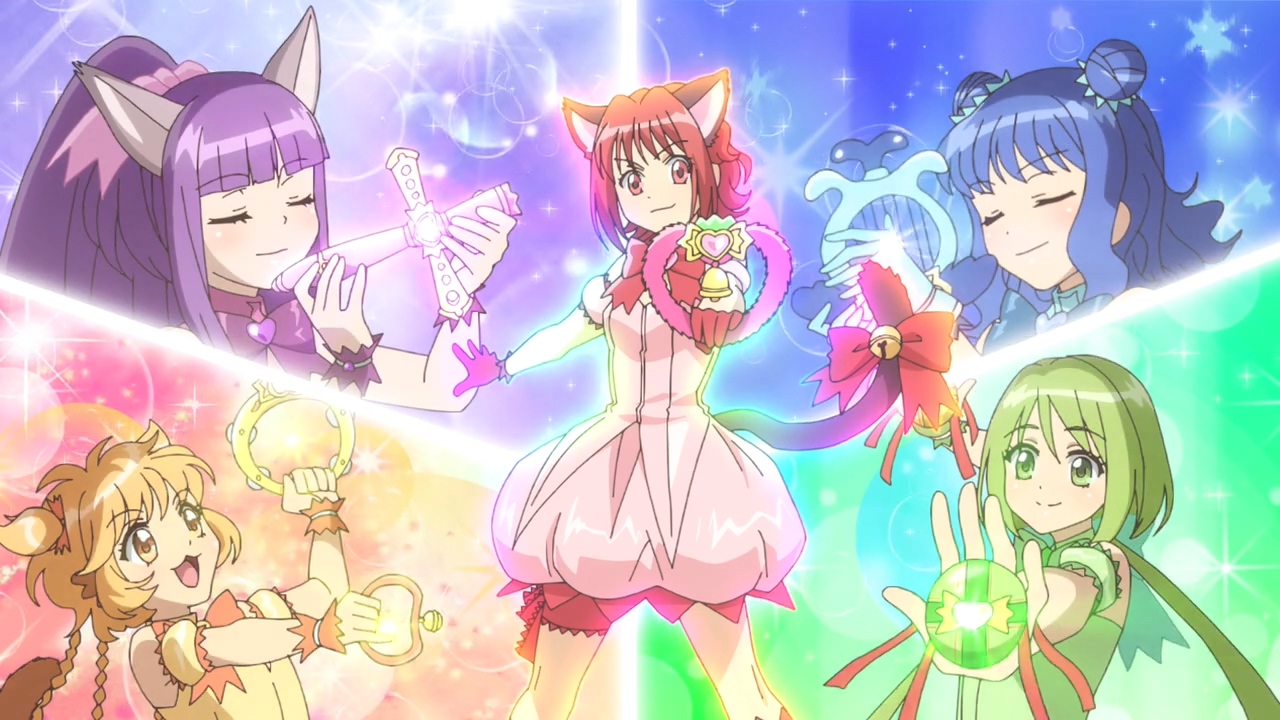 This eponymous anime has been adapted from its manga created and written by Reiko Yoshida with Mia Ikumi behind the illustrations. The manga was originally serialized from September 2000 to February 2003 in the shojo manga magazine Nakayoshi of Kodansha. The chapters of the manga are collated into seven tankobon volumes. The manga even got a two-volume sequel named Tokyo Mew Mew a la Mode was also serialized in the same shojo magazine from February 2002 to January 2003.

This series was later adapted into a 52 episodes anime series by TV Aichi, We’ve Inc., Tokyu Agency, and Studio Perriot. This version of the anime first aired in Japan from 6th April 2002 to 29th March 2003. TXN affiliates were responsible for airing this anime and making it available in the market.

The manga of the anime, as well as the sequel, were licensed for English publication in North America by Tokyopop. Later in 2011, Kodansha Comics are fresh and newly translated version of the manga. The anime series the manga was licensed by 4Kids Entertainment in North America.

Tokyo Mew Mew New, a new anime adaptation of the manga, was announced to celebrate the 20th anniversary of the manga. The anime is animated by Yumeta Company and Graphinica, and it is directed by Takahiro Natori. Yuka Yamada is behind the scripts of the anime. The design of the characters is taken by Satoshi Ishino while Yasuharu Takanashi composed the music for the anime. The new cast members of the show were chosen through an audition that was held publicly in Q2, 2020. The first season of the series premiered on 6th July 2022 on TV Tokyo. The series was licensed out of Asia by Sentai Filmworks, and it was also streamed on Hidive.

The good news about the anime is that the second season of the anime was announced after the final episode of season 1 aired on the 21st of September, 2022. The second installment of the anime is set to premiere in April 2023. It is just a matter of a few months before we welcome the second season of the show! Till then we will have to wait patiently for the creators to finally wrap up the season before presenting it to us.

The story of Tokyo Mew Mew is quite interesting to look at. It happened in Tokyo, Japan, after the occurrence of an earthquake, Ichigo Momomiya and four other girls got bathed in a strange light. Astonishingly during this occurrence, Ichigo gets merged with a cat leading her to act like a cat using cat puns. It gets discovered later that Ichigo was merged with the DNA of the Iriomote cat.

This strange incident gave her the power to transform into Mew Ichigo: a heroic cat girl. Ichigo Momomiya is given the order to defeat Chimera Animas, alien parasites who infect animals turning them into monsters. She is instructed by Ryou and Keiichirou to find the other four girls who were transformed as well.

The anime has received a rating of 7.4/10 on IMDb which shows that it has been well received by the audience worldwide. The show has also received a 64% average audience score in Rottentomatoes, which is decent as well.

Where can you watch Tokyo Mew Mew New Season 2?

It is obscure to us as to where exactly the show will be released but you can watch all 12 episodes of the first season of the show on Crunchyroll.

1. How many episodes of the show are there?

There are 12 episodes of the first season of the show.

2. What is the age rating of Tokyo Mew Mew?

3. What is Minto’s age in Tokyo Mew Mew?

Minto is probably 13 years of age.

Blue Knight is a mysterious alien in Tokyo Mew Mew who emerged out of Masaya’s protectiveness over Ichigo.