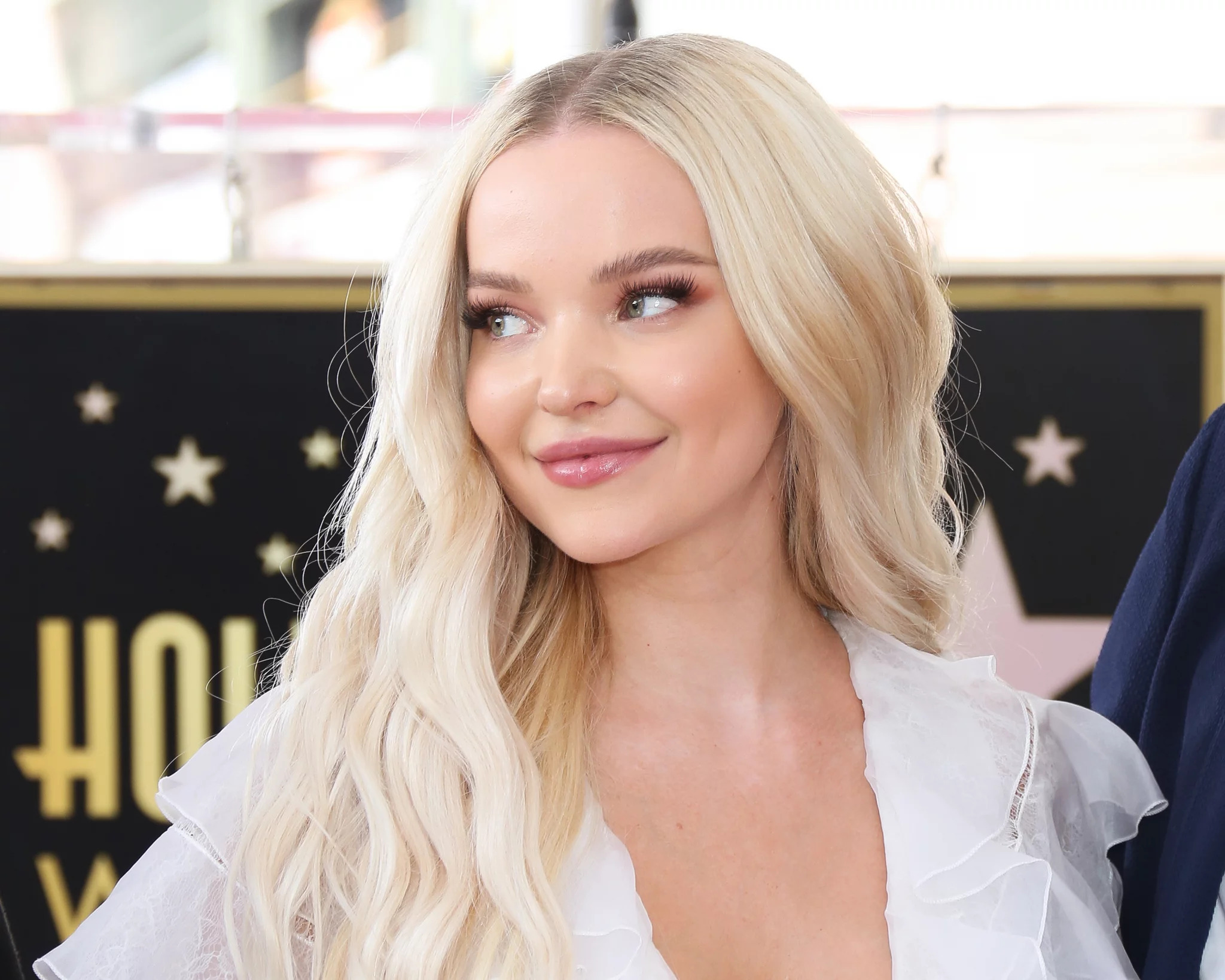 Those long, wavy blonde hair and those glittery eyes have conquered the world with utmost grace. Dove Cameron, an amazing actress and singer, is used to being the centre of attention. She is used to the red carpets and those spotlights; why wouldn’t an actor as talented as she be? Dove knows her life will always be under close scrutiny; people will always be watching her like hawks. And it isn’t only because she is such a brilliant actor but because her life warrants it.

Dove isn’t an open book; rather, she is someone who knows how to hide her emotions. This is the exact reason why the world has kept its eyes fixated on her. She has struggled throughout her life and experienced the dark side of the world more often than not. But Dove has been kindling her hope to find magic for years now. Did she find it? Or is Dove Cameron still single?

Who Is Dove Cameron Dating?

Dove is a public figure and has been for decades, despite her being just 27. She began her career at the tender age of 8, and ever since, Dove has been a popular celebrity. For someone as talented and humble as her, you’d think she’d had an easy ride so far. But she hasn’t, and neither has her love life seen the sparkling sun for too long.

Ryan McCartan, her Liv and Maddie co-star, has been her longest boyfriend. They had a three-year-long relationship, which eventually turned into more when they decided to marry each other. Dove and Ryan announced their engagement in 2016 and were going to marry the same year. But Dove called off her marriage and started dating Thomas Doherty. Her relationship with Doherty lasted for about four years before they split.

Since then, Dove has been single. In an interview, she casually mentioned that she wanted to feel the magic, but it seems like Dove hasn’t felt it yet. A year after she broke ties with Thomas, Dove claimed that she was queer, and since then, she hasn’t dated anyone.

READ THIS: Is Amanda Peet Married? Actress Reveals All About Her Dating Life!

Dove Cameron Is Over Her Ex-Fiance But Why Is He Still Struck?

The drama of relationships never seems to deflate. When it comes to Dove, nothing is as it seems. She started dating Thomas, and just a while later she broke off her engagement with Ryan. And while at that time Ryan didn’t make a big fuss about it, he later started throwing accusations at Dove.

Cameron was accused of cheating on Ryan while they were still together. He claimed that Dove wasn’t loyal to him and that she was never committed to their relationship. In the early 2020s, these accusations were all over Twitter. Dove didn’t explain herself, of course, but posted a picture on Twitter with a quote that insinuated Ryan was toxic to her. Though the dynamics of their relationship have never been clear, it is pretty obvious that Ryan was obsessing over her.

The Twitter war died down eventually, with many of Dove’s fans claiming that Ryan was just being petty and jealous. It is clear that Cameron is over her ex-fiance, but who knows what’s going on in Ryan’s head? Who knows if he is still stuck in the past or if he has moved on?

We all just see the dazzling smiles, the immaculate dresses, and the makeup-clad faces. What we don’t see are the tears behind those eyes. Dove Cameron is one such actor who knows how to smile even when she isn’t happy at all.

Ever since Dove joined the Disney family, her popularity has kept rising. She has been nicknamed “Little Dove” and has had millions of people appreciate her. But the star doesn’t feel like a part of the Disney family; she believes that she is an imposter. All the Disney stars are known for their blinding smiles and princess-like appearances. Dove fits the criteria perfectly, but her heart wasn’t in it.

In her latest interview, Dove mentioned that whenever she glanced at her peers, she knew they were born for Disney fame. But she never felt like a Disney girl herself; she never thought that she was more than an imposter. We all know that Dove has had far too many battles to fight, but this one seems a bit too much to bear; considering yourself an outsider despite being crazily talented isn’t a piece of cake.

MUST READ: Who is Kortney Wilson Boyfriend? Is She Dating Anyone?

Dove Cameron: Why Did She Change Her Name?

You’d be surprised to know that our Disney star has left her original name and now calls herself Dove Cameron. Since she lost her father, Philip Alan Hosterman, Dove has been a little lost. He was the closest person to her—her best friend and her mentor. But then, all of a sudden, Dove lost her father to suicide, and her life was altered altogether.

Chloe Celeste Hosterman was transformed into Dove Cameron; her smiles were lost, and she was forced to battle anxiety. She changed her name to Dove in honour of her father, who used to call her Dove. The reason for his suicide wasn’t revealed, of course, but there were rumours regarding his suffering from severe depression.

With the new name, Chloe began changing her perspective towards life. She started to stay upset and hardly felt cheerful in the years following her father’s death. Maybe dropping the name that represented her childhood and picking on a name that portrayed her love for her father is Dove’s way of keeping him close. Though some of her close family members and friends still refer to her as Chloe, the world knows her as Dove Cameron.

Dove began her career when she was 8 with a role at a local theatre. For almost four years, Dove continued with the theatre before becoming a Disney girl. We all know how memorable the twins Liv and Maddie Rooney, portrayed by Cameron, has been for us. After her collaboration with Disney as an actor, Dove also started recording songs for Disney.

Dove later appeared in the Disney original Descendants film a few years later. Liv and Maddie continued to entertain us for more than four years, while Descendants has had three sequels so far. Dove broke off with Disney after being a part of the franchise for almost a decade. Though Dove mentioned that it wasn’t Disney’s fault that she didn’t want to continue anymore and that she loves Disney, she also believes that it’s time she moves out and explores herself.

FOR YOU: Luke Eisner Girlfriend: Who Is He Dating?

Dove has been travelling since she was a kid, first because it was necessary and now because it has become a hobby. If you look closely, Dove is highly affected by her father’s death. She does everything she can to keep him close to her. One such method she has opted for is to maintain travelling as a hobby.

Dove spent a lot of time as a child travelling with her father, who was a jewellery dealer. They travelled a lot to France and India for business, which explains why Dove is now fluent in French. Since her parents were separated, she spent most of her time with her father, who encouraged her passion for acting.

Dove Cameron’s Disney Persona Does Not Reflect Her True Self

Now that Dove is not a part of Disney anymore, she has been exploring herself intently. Dove has met several people, participated in numerous interviews, and has also come out as “queer.” After leaving behind the Disney life, Dove has released numerous songs and has been seen portraying a side we have never seen before.

Dove has switched gears from comedy to horror and action now. Also, she has been working on herself and her music. Dove has mentioned that her music now represents herself more than it ever did. She has also talked about how leaving her Disney image behind has been a progressive decision for her. And it has certainly made her less anxious and depressed than she has been.

FOR YOU: Who Is G-Eazy Dating? Is The Rapper Single?

Who Is Dove Cameron?

Dove is a leading singer, actor and amazing artist.

What Is Dove Cameron’s Real Name?

Dove’s real name is Chloe Celeste Hosterman. Though she has legally changed her name, some of her close family members and friends still refer to her as Chloe.

When Did Dove Cameron Start Her Career?

Dove started performing at a local theatre when she was merely 8.

Though Dove seems better now, she isn’t over her losses yet. Those losses have sliced her too deep but it doesn’t seem like she is not suffering from any anxiety issues as of now.

Is Dove Cameron A Singer As Well?

Yes, Dove is a well-reputed singer aside from being a phenomenal actress.

Yes, Cameron isn’t working with Disney anymore. It is not confirmed whether she had completely broken off ties with Disney altogether. We might get to witness her back soon.

Is Dove Cameron A Frequent Traveller?

Yes, Dove has a passion towards travelling.

RECOMMENDED: Who Is Suki Waterhouse Dating? Is She Single?