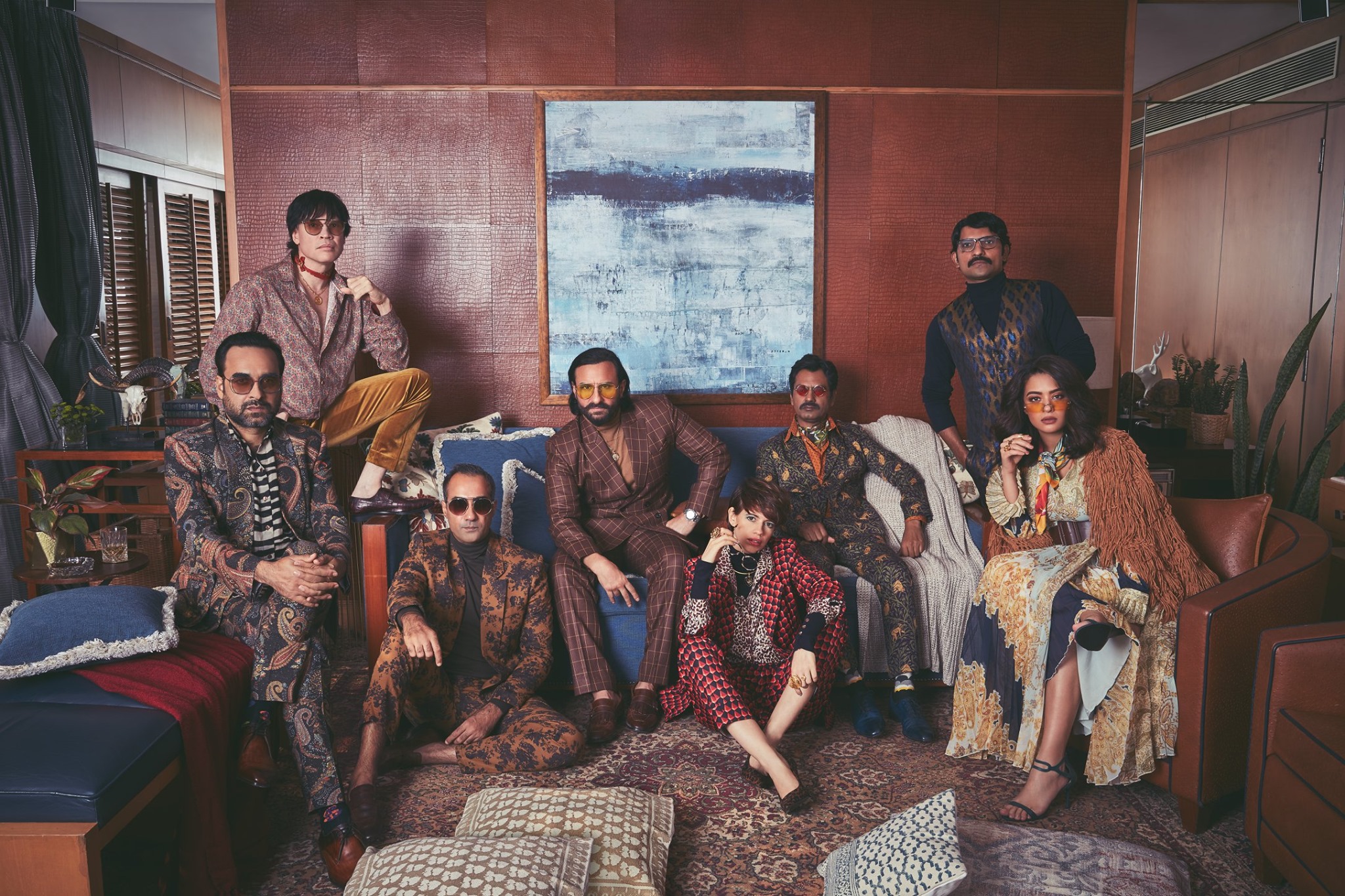 What would you do when you have 25 days left to save your life? And when it is not even your life on the line but that of your entire city? Sacred Games is a crime thriller saga that delivers the story of a policeman out to save himself and his city. The series has every element that makes it one of the most popular Indian web series.

Set in an apocalyptic time zone, Sacred Games is a game of life and death. It is a war between deadly criminals and a police officer who knows no bounds. It is brimming with drama that will enthrall you, psychopaths that will play havoc with your mind, and a mystery that will keep your breath lodged in your throat. Here’s a list of characters that made Sacred Games such a renowned series.

Artistically woven by Anurag Kashyap and Vikramaditya Motwane, Sacred Games contains a rich cast. This series is set in the city of Mumbai and is inspired by a gangster that needs no introduction. Dawood Ibrahim, a name no Indian can ever forget. This series was originally written by Vikram Chandra in vivid detail in his novel. The Sacred Games Netflix series is a cinematic representation of Chandra’s novel.

So far, we have witnessed two installments of this mystery thriller. Here’s a list of all the main and recurring cast members who make Sacred Games an epic hit.

Representing the naive yet brave police officer, Sartaj Singh, Saif Ali Khan delivers a commendable performance. Sartaj is a man of the highest morals and manners. Despite having an anxious soul, Sartaj is nothing but a man who stops at nothing to save his nation. Throughout the series, we see Sartaj raising hell to find out the truth behind gangster Gaitonde’s death.

Sartaj is a committed, dedicated and marvelous officer who deals with various dark issues such as racism, terrorism, and gender biasing. He wanted to become a well-recognized police officer. And it is because of this deeply-rooted desire of his and his relationship with Dilbagh Singh that he gets a call from Gaitonde. This call alters his life forever and not for good.

Ganesh Eknath Gaitonde is a cunning, sharp-witted, betrayed by the world criminal. Gaitonde is delivered to us by Nawazuddin Siddiqui with utter finesse. He kills without remorse, maims without guilt and tortures with skill. Siddiqui is a brilliant actor known for his natural character adaptation. In this series, he delivers a sociopath we hate with a passion but cannot help ourselves sympathizing with the boy he once was.

Gaitonde is a man hungry for revenge but knows his days on the planet are limited. With his half-smile and dead eyes, we know that Gaitonde has accepted his fate. He drops in unexpectedly into Sartaj’s life. Gaitonde challenges Sartaj that he knows everything about Sartaj’s life and that he has only twenty-five days to save himself and his city.

An ambitious RAW agent, Anjali Mathur works closely with Sartaj Singh. She is on a mission to find out the shady connections between the home minister, a sinister assassin, and an actress. She believes that these people are on something, possibly something that will harm the nation.

Anjali fights tooth and nail to dig up the truth behind the suspicious gang. Radhika Apte delivers this super cop brilliantly. Anjali helps Sartaj a lot during his mission, she even gets ahead of him at times. But in the end, Anjali has to face dire consequences of getting involved with such a dangerous gang.

Can you forget someone who showed you humanity when the world was nothing but barbaric to you? Even if Gaitonde was a psychopath, he couldn’t abandon his country and decided to save it. Dilbagh Singh was a man who guided Gaitonde toward morality and humanity. Dilbagh is a man of morals, a soft heart, and helpful nature. Kindness is his personality—or it was until he was brutally murdered.

He gets trapped in the carefully constructed web of Guruji despite having a peaceful mindset. He is the father of Sartaj Singh, our equally kindhearted and naive police officer. Gaitonde chooses Sartaj to save Mumbai because of his relationship with Dilbagh.

ALSO READ: Top 13 Best Sniper Movies Of All Time That You Will Love!

The leading antagonist of Sacred Games, Guruji, is portrayed by Pankaj Tripathi. With his flawless acting skills, Tripathi delivers a wonderful performance and lures us all toward his character. Guruji is a conniving man who runs a religious group and instills twisted religious beliefs in his followers.

Guruji is the mastermind behind the explosive attack planned for Mumbai. With his ability to read people like books and manipulate them like puppets, Guruji is a force to be reckoned with. He has encouraged Gaitonde’s psychopathic tendencies since he is an atrocious psychopath himself. He is also the reason why Sartaj gets involved in such a diabolical mess.

No one is born a criminal but many are born into crime. Gaitonde was one such kid who has been brought up in the world of blood and murders. Gaitonde has always hated him with a fiery passion because of the way he treated his mother. Not only his father, Gaitonde even hated his mother for going behind his father’s back and pursuing another man. In the end, Gaitonde kills her brutally for destroying the peace of his home and unnecessarily troubling him.

The police arrested Gaitonde’s father under the misconception that he was behind the murder of his wife and claimed that he was suspicious of her. One thing the series is brilliantly known for is the glimpse of Gaitonde’s emotional side. Gaitonde feels guilty for sending his father to prison and ends up deciding to save him from an apocalypse. Sandesh Kulkarni wonderfully portrays Trivedi, Gaitonde’s father.

MUST READ: 10 Movies Like Monica O My Darling That You Should Not Miss!

Gaitonde’s mother has been a prominent figure throughout his life. She has destroyed his childhood brutally. As a mother, she was supposed to be the guiding light in Gaitonde’s life. But whenever Gaitonde needed her, she was never there for him. Not only did she bring him into a world of violence, but she also brought up Gaitonde’s violent nature.

Gaitonde ends up killing her and her supposed husband ends up in prison all because of her one wrong move. Had she not chosen to go behind her husband’s back, Gaitonde would have been a somewhat sane man.

Most of this series is centered around Gaitonde, and at one point, his tragic life story is what we all think about. But then, characters like Cuckoo slay our hearts. Brought to life by Kubbra Sait, Cuckoo is Gaitonde’s girlfriend and a bar dancer. She has survived one hell only to be dragged into another.

Gaitonde has stolen her from his enemy, Suleiman Isa, and has decided to keep her for himself despite being married. Though she is at his mercy, Cuckoo depicts women’s strength in its truest form. She portrays tenderness in a world of barbaric cruelty.

TRY THIS: Ritvik Sahore Web Shows: In Which Shows He Had Worked On?

It seems like Sacred Games is flooded with sociopaths and criminals. After Guruji and Gaitonde, we get to meet one more heinous gangster, Suleiman Isa. He is Gaitonde’s rival and has only one intention: to kill Ganesh Gaitonde. In fact, he just doesn’t want to kill him; he wants to slaughter Gaitonde.

The rivalry between Suleiman and Gaitonde runs deep; each of them competes against the other for every little thing. And since both of them are equally cruel, they don’t hesitate to flood the city with blood and dead bodies. Suleiman is fabulously represented by Saurabh Sachdeva.

Hizbul Mujahidin is an organization that supports Guruji and his destructive ideologies. Shahid Khan, like Guruji, believes in the superiority of religion and all of its stupid practices. In a sovereign nation, these people are trying to split the world, but before they can succeed, Gaitonde turns on them.

During the phase of the India-Pakistan partition, Shahid’s mother separated from her family. This incident affects Shahid’s life and the story tremendously. In the finale, before the bomb is defused, we get to learn that Shahid is Sartaj’s cousin, and both of them are standing on opposite thresholds.

Can a man as cunning and evil as Gaitonde be arrested? A sharp and brave RAW agent, Yadav Madam, is portrayed by Amruta Subhash. She is an agent who held Gaitonde captive and made him follow her every command. And for the first time, Gaitonde did listen to someone—and not just anyone, but a police officer.

Brought to life by Amruta Subhash, Yadav Madam is a character that depicts the true struggles and strengths of being a female agent. She once made Gaitonde obey her every command by dangling his freedom over his head.

Though Joshi is playing a mere constable in the series, his contribution is one of the most celebrated ones. Sacred Games is a series that revolves around murders and threats and at one point it all becomes too much to take. Constable Katekar is our savior at such times. He instills the lightness and humor we all need to survive such a broody series.

MOST RECOMMENDED: 20 Movies Like Vikram Vedha That Are Full Of Action!