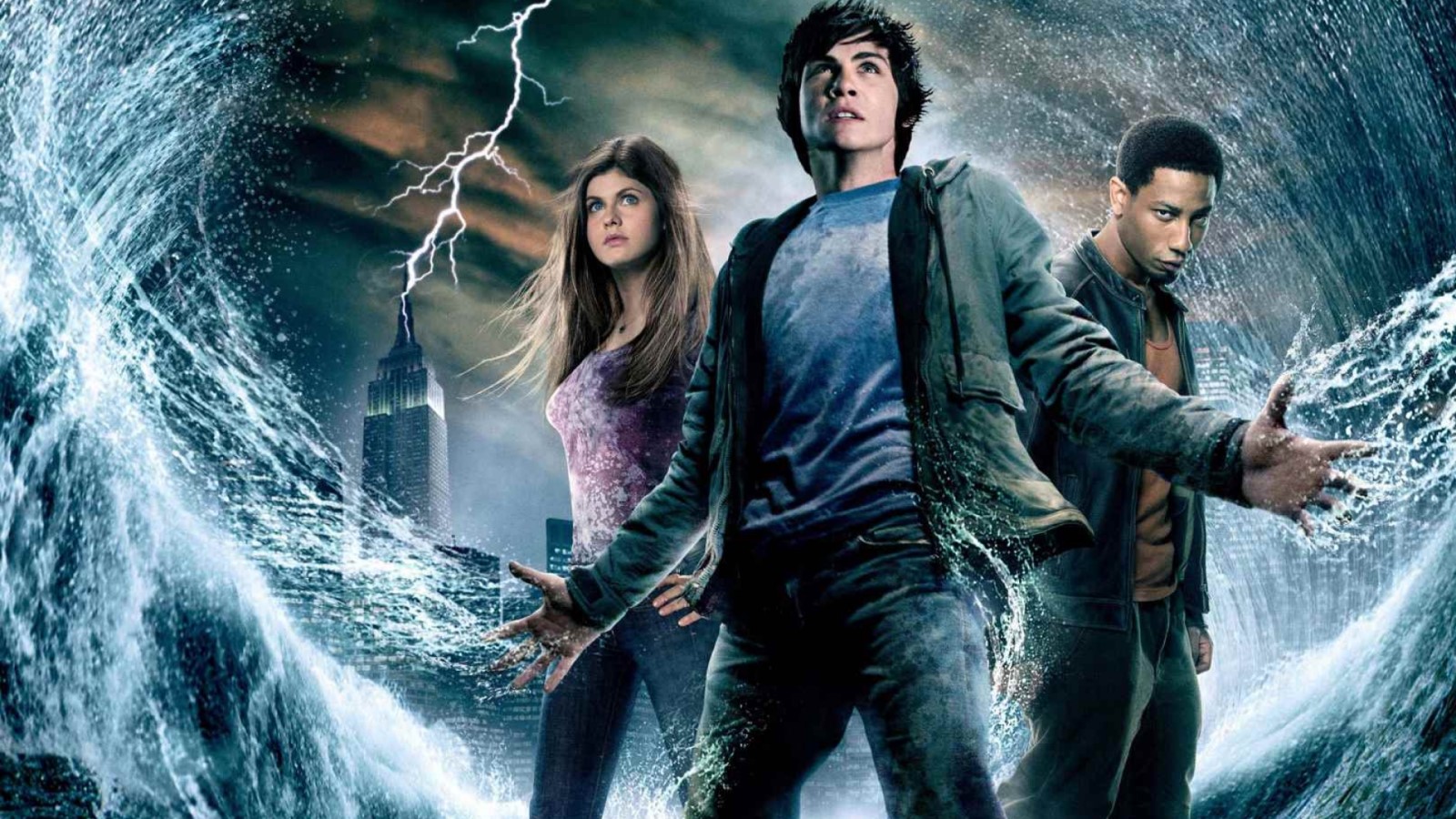 Winters are magical. Bone-chilling and teeth-shattering, sure, but magical nonetheless. The skies are faded, the mornings are foggy, and the nights are so quiet you could even hear the leaves talking to each other in the wee hours before sunrise! With weather like that, you don’t need too many embellishments to turn it into a party! Just a warm blanket, a scorching hot cup of cocoa, and a fantasy series that can take your mind away from all life’s minor difficulties.

Am I right? Of COURSE, I am, and in an effort to help you escape your boring reality, I am here today with a series that’s going to slither into your heart ever so quietly and make a permanent home there. In fact, it might already have! Ever heard of Percy Jackson?! Because he is the awesome hero of the story that I am going to talk about today.

Adapted from Rick Riordan’s novels by the same name, Percy Jackson movies have had a massive fan following ever since the first book came out in June 2005!! And 5 years later, Chris Columbus finally decided to turn those thrilling books into a movie in 2010. It has been a wild ride since then. And most of all, Tumblr, the fandoms’ official home, has been able to turn more and more people to their side so the Percy Jackson fan army has been growing every single month!

Excited yet? I know you are! But with there being so many books in the series and the movies not following a set path, it can get confusing. You must be wondering, which one you should begin with. But don’t worry about it because today I am going to talk about both movies in detail and touch on the order in which you should watch them for maximum immersion and an even more fun ride. Let’s begin!

Released on 12 February 2010, The Lightning Thief is the one you have to watch first. It begins with Percy, only 12 years old (wow, the release date is really making a statement now!) finally realizing the truth of his parentage and setting off on a journey that’s more than this skateboarder ever bargained for! N

Oh, and did I mention the little fact that he is the son of Poseidon himself? Yep, the Greek God of Sea and Storms! BEAT THAT! It doesn’t get more exciting than this, trust me. There are accusations, betrayals, adventures, friendships – everything in JUST the right amount to turn this movie into an ultimate experience.

One thing, though, that gets the goat of every Percy Jackson fan out there, is the fact that Chris Columbus didn’t follow the books closely enough, indeed if he followed them at all! Sure, the plot is more or less the same in its essence but the movies do try to rush through the story instead of taking their sweet time (hence there being only two movies for a series that’s originally 6 books long!)

And while that careless oversight is really hard to deal with, especially for the devoted fandom, I cannot deny that the movies are still a hell of a time and very fun to watch once you manage to forget all about it. Oh, and on a side note, if you haven’t read the books yet, this might be the only rare circumstance where I’ll advise you to watch the movies first otherwise you’ll be underwhelmed if you watch them after the books, which will ruin the whole theatrical experience for you. Because deep down, you’ll be aware of how the movies don’t do justice to the original books and it all could’ve been done so much better. And you’d be right of course!

Okay, now back to the movie’s plot, as I was saying, Percy is Poseidon’s son and is accused of a crime against Zeus, who is always a pain in every single story ever told involving him. And he is especially angry this time around because someone has stolen his lightning bolt and the God of Sky (Zeus) is wrongly convinced that Percy is the one to blame. And this utterly life-changing event sets our darling hero on a series of adventures that are too good to miss out on.

READ MORE: Top 15 Movies To Watch If You Like The Mummy

Now, I don’t say this often. But you are better off just avoiding this one altogether if you don’t want to pull all your hair out, out of frustration at the direction the makers of this movie made the characters take!

But despite that little (as IF!) hiccup, yeah, this is the second and the final (thank the ancient gods for that) movie in the series. In this second installment in the movie series Percy and his half-blood friends deep into the raging seas and honey, here there be monsters!

They journey all the way to the Bermuda Triangle in order to save their homeland, Camp Half-Blood (not gonna lie, this is one of the least impressive names I have ever read! With the magic, you spawned with this series, Rick, I was hoping for something a bit more heroic but okay)

So what’s the danger that surrounds the not-so-humble abode of the children of gods? Well, it seems that the borders separating the camp from the rest of the world are thinning out and that poses a threat to all. What with monsters sniffing the children out and hungry for a sweet piece of these magical humans, there is not a moment to lose and Percy and his band need to work fast.

Only, Percy has been feeling out of his element lately. Literally. You can often catch him dipping a toe here and a hand there in the water, just to be able to connect with his father, Poseidon’s, powers. But he is unable to do that. This inner conflict is explored to quite an amiable degree in the movie (not as well as in the books, though. Yep, I’ll keep saying that!)

A self-identity crisis coupled with world-saving assignments and a few gorgeous gods and ruthless monsters are thrown into the mix. It certainly paints one hell of a promise and I am here for it, despite my long list of scruples with this adaptation.

READ MORE: 27 Movies Like American Pie That Are Worth Watching!

Percy Jackson and its Delightful Cast

Before I even begin telling you all about the cute and confused actor who plays Percy, let me direct your attention to the fact that this movie gives us Pierce Brosnan. I repeat, we have Pierce Brosnan in the movie playing the role of Chiron, the director at Camp Half-Blood. That should be enough for you to watch the movies, even if they fail to enchant quite to the degree as the books can!

Still, if you must know, the series has handed out the role of Percy to Logan Lerman and he is absolutely gorgeous and does a decent job with the character so I can’t really complain. Then we have Alexandra Daddario as Annabeth Chase and the grey-eyed actress doesn’t fail to enchant.

Oh, and did I forget to mention that the character of Zeus is played by Sean Bean? This hell of an actor does a great job acting out the hateful and rather infuriating role of Zeus in Percy Jackson. All in all, this cast almost makes up for the loopholes Columbus left out in the series, but that might just be my inner fangirl talking. *shrugs*

READ MORE: How Many Iron Man Movies Are There In Total? Know Here!

Look guys, I won’t lie, the Percy Jackson movie franchise failed to impress many of the fans, including me. Not because it’s not well-made, it is! If it was just movies and there were no books to compare it with, this is one hell of a movie series. But, when compared to the original written version, they are too bland and fail to excite as much.

It could just be because, having read the books first and foremost, I have way too many original details embedded in my mind and when I didn’t see them in the movies, I was infuriated beyond measure. Not to mention that the characters behave in ways that are not in tune with the books and we readers take that very seriously, even if directors don’t *give you the death-stare Chris Columbus*

Still, what can I say, I am a sucker for gorgeous actors and bone-chilling adventures and once I am able to forget all about the original books, the movies are fun to watch and I definitely recommend them to all fantasy lovers at least once!

READ MORE: 10 Movies Like The Wonder That You Cannot Afford To Miss!