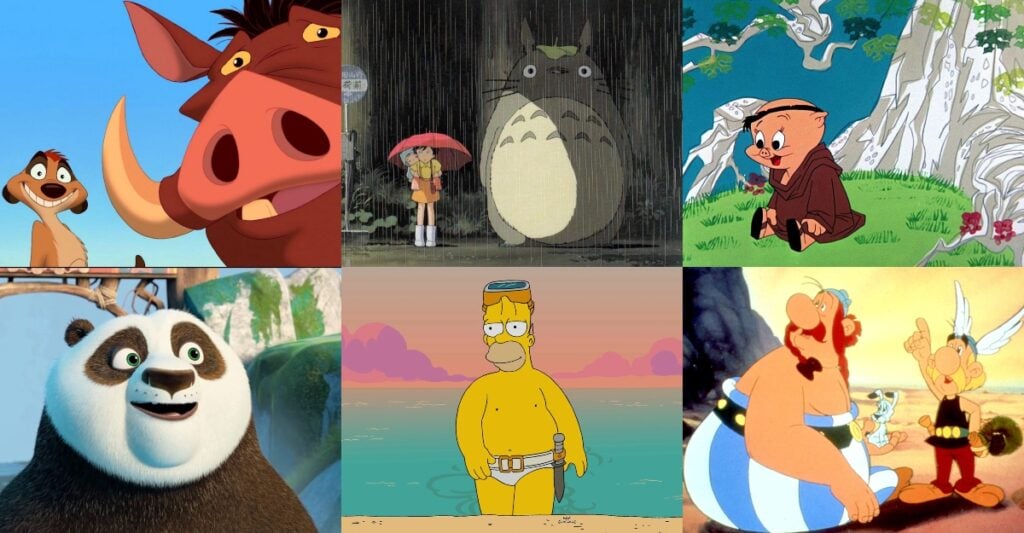 Ursula is a fictional character from ‘The Little Mermaid’ The Disney cartoon was released in 1989. Ursula is a villainous sea witch. She has a body of purple colour and hair with white color. Ursula is the negative character in the movie.  In the movie, she offers a mermaid princess to become a human. The princess’s name is Ariel and she wanted the love of Prince Eric, so she accepted Ursula’s offer. She told Ariel that she will receive Prince Eric’s love within three days. Ursula was wicked-minded, her intention behind this was to usurp her father and rule over the ocean. Her father was the king of the ocean named Triton.

Ursula even killed her older sibling until she became a queen. She betrayed the princess and her father. The voice of the character was given by the American actress Pat Carroll.

Muriel is the fictional character in an American series ‘Courage The Cowardly Dog’. The cartoon series ran from 1999 to 2002. In this cartoon, the main character is ‘Courage’. He is an added puppy. His parents were sent to outer space.

Muriel Bagge is a Mexican woman who is generous and kind. She is overweight and adopted Courage when he abounded. Often whenever his husband Eustace Bagge harnesses Courage she hits him with a rolling pin. She likes tea, companies to sitar players, and tends to her garden. She is fond of cooking and often uses a lot of vinegar in food to distaste her husband and Courage. She loves sitting in a rocking chair with her pet dog.

The voice of the character was given by Voiced by Thea White and Howard Hoffman. The series was created and directed by John R. Dilworth.

She is a huge pink Gorilla who is smelly. She believes that she is quite fashionable. Barbarus is the female villain in the series. She is a stylish gorilla and her sister often used to call her ‘Barbie’. Her sister’s name is Bianca. She is a member of the Fashionista gang. The voice of the character was given by Dee Bradley Baker.

READ MORE: Top 15 Strongest One Piece Characters: Who Is The Most Powerful Pirate?

Lumpy Space is a fictional character who looks like a purple cloud in Adventure time. Adventure time is an American cartoon series. Lumpy has sharp teeth and a yellow star on their forehead. She is the queen of Lumpy Space, the yellow star on her forehead shines while she floats. She has no legs and she has a deep nasal voice. Whenever she punches herself she takes the shape of a ball. Her body can take any shape if it is changed forcibly. Lumpy is one of the three most recurring princesses. If she bites someone, they will get infected with her lump.

Mrs Puff is a fictional character in SpongeBob and SquarePants. She is a teacher of the titular character in her boating school. She is friendly to all of her students. SpongeBob has bad driving skills due to which she gets several mental instabilities. She cares about him a lot but never shows him. She always acts arrogant to him. She has some crime on her head, all because of SpongeBob. She never said that she hated him. Because of Mrs Puff, SpongeBob did not have his driving license.

Kendra Krinklesac is a fictional character in the Cleveland Show which was released in 2009. Kendra is possibly disabled as she is a redneck. She is the mother of Ernie Krinklesac and the wife of Lester Krinklesac. Kendra is overweight and has diabetes. She can not go anywhere without her Rascal scooter. Even though she is suffering from many problems she always stays happy.

READ MORE: List Of The Top 12 Strongest Characters In Naruto!

The cow is the main character of Chicken and Cow. She weighs 600 pounds. She is a seven-year-old 1st-grade sister. She tends to show her uncanny talent. She loves her brother’s chicken and considers him cool. Chicken often considers her as stupid and prone to outbursts. She addresses chicken as ‘Big Brother.’ The voice was given by Charlie Adler.

Chicken And Cow is an American series. It was created by David Feiss.

Toot is yet another fat fictional character. She can digest anything like tv, phone and more. She often eats this thing when she is frustrated. The tool features old-school and white. She lives in a fantasy world and thinks that she is very sexy and all men want her. She is short-tempered and has a borderline personality.

Toot Braunstein is a fictional character in Drawn Together.

Mei Mei is a character in Kung Fu Panda. She is a ribbon dancer. Mei Mei lives in the panda village along with the panda. She had a crush on monster Po. She is beautiful and quite attractive in the village.

READ MORE: 14 Characters Who Died In Demon Slayer: Who Did We Loose On The Journey?

Annabelle is a fat fictional character in the animated series Eek! The Cat. Annabelle is a chubby cat in the series. Her body is fat with skinny arms and legs. She is very cute and is the girlfriend of Eek. Eek fell in love with her the first time he saw her. Annabelle is quite sensitive and can go to any extent for her loved ones. As she is very sensitive she can cry over small things.

Wendy Elizabeth is yet another fat fictional character of the Eek! The Cat. Wendy is fat and a small height. She looks cute and sometimes funny. She ties two plates of her hair like antennas. Her body is fat and has thick legs and arms. She has a human character in the series.

Jaiko Gouda is the fat character of Doremon. Doremon is a famous cartoon that fans love to watch. Doraemon and Nobita are friends. Nobita is a skinny character in the cartoon. Jiyan is the charter who teases Nobita. Jiyan has a sister Jaiko who has a crush on Nobita. But Nobita doesn’t like her. Jaiko loves painting and often goes to the garden a lot. She is quiet and works in her mother’s store. Jaiku gets married to Nobita.

Tun Tun Mausi is a fat character in the Indian cartoon Chhota Bheem. She is the mother of Chutki. She makes Ladoos very tasty and Bheem and his friend often steal her ladoos. She ties a bun and wears a saree. She is obese and her daughter Chutki is skinny. Chutki and Chotta Bheem are best friends.

Nau Hai is a cute fictional character in Kung Fu Panda. Kung Fu Panda is one of the best cartoon movies and series. Nau Hai was featured in the series Kung Fu Panda: The Paws Of Destiny. She was among the four panda kids who used to live with her grandmother. She is the twin sister of Bao. Bio is her Brother, another fictional character in the series. The four pandas take this of the four constellations. May Hai is the leader among the four pandas, as she receives the chai of Blue Dragon, the leader of the four constellations, and has the skill of leadership. She is a bit bossy and is always focused on her work to save the world. Nau is very adventurous and eager to discover new things. Her character is quite amazing in the series. Her fights are fun to watch. And she is a bit difficult to understand. She and the kid panda get trained under Master Po. The main character of Kung Fu Panda.

Jing is also a fictional character from Kung Fu Panda. Jing and Nau are best friends in the series. They both look cute together. The four kid pandas are just amazing. Bao has the chai of a white tiger. Her chai helps to heal others. She is the most sensitive among the four. May Hui always sides with her. Her fighting skills are outstanding. Her chai taught her the power of kindness over aggression. She often saves the world by healing others. She got trained under Master Po.

READ MORE: 15 Indian Anime Characters You Should Know About!