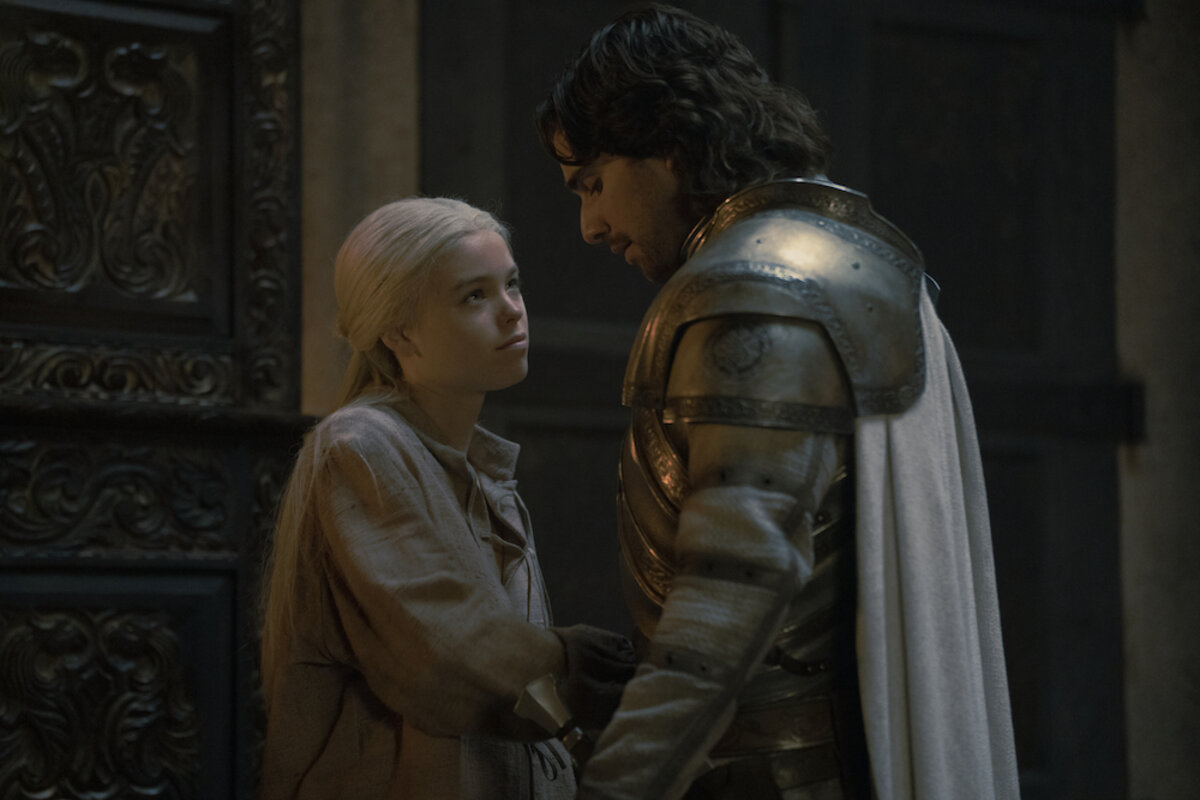 Who does not know House of the Dragons, the prequel to one of the most loved series Game of Thrones? Well, as per a few of the sources, for quite some time people have been linking Fabien Frankel and Milly Alcock. For us, on-set romances are a thing people generally vouch for, come on we might not have the power couple Blake Lively and Ryan Reynold if they did not do a movie together. We would have missed out on such a couple and many more. This prequel has been creating quite a buzz with expectations so high, but they sure are living up to it.

Since the introduction of the eternal beauty Princess Rhaenyra Targaryen which is embodied in its adolescent by Milly Alcock, one cannot take away their eyes from her. She is one of the best actors in season 1 of House of the Dragons. Then comes our gorgeous swordsman Ser Criston Cole, played by Fabien Frankel who aces the role and his chemistry with the Princess just makes one wonder when will they have one! The genuine and breathtaking chemistry between the Princess and Swordsmen makes the fan wish for them to be together in real life as well. We have all been guilty of making numerous ship names.

This House of the Dragon cast, in both Fabien and Milly essay important roles, has rumored to have been dating. This has set several fanfictions fanatical and cannot wait to get more deets on this couple. With Milly having about 1.4 million followers and Fabien having 341K followers, their posts at times each other are noticed by all fans.

The speculations began with Instagram posts and their mention of each other during interviews. For one instance, during a recent interview, we could see Fabien Frankel quoting that he was quite disheartened that Milly kissed the actor who essays the role of Prince Daemon Targaryen, stating he wanted to kiss the Prince. Well, this was a clear way for him to negate the rumors of dating his co-star in a subtle smart way but for us, this small statement boosted hyping the alleged couple.

Coming onto the Instagram feed, which is the giver for most relationships these days, when we saw posts related to Fabien on Milly’s feed, which is quite a private person, and Milly’s few pictures with Fabien, it just magnifies the theories.

As per our observation, we speculate the relationship in this year itself, during the shoots. It seems to us they have gotten quite serious about each other, as we can see Milly moving to London, and guess who already resides there? Our gorgeous Ser Criston Cole. Is it a mere coincidence or could you expect a post regarding their official announcement of dating? Only time will tell.

READ MORE: Is Selma Blair Gay? Is The Actress Committed?

As of now, we can see Fabien trying all he can to subside his dating life, especially with Milly owing they both are private but the Instagram posts like their trip to Pairs for the premiere with having spent supposedly quality time. What can we say, the manifestations of House of the Dragon fans are coming to real life, where we can spot the actors hanging out several times. They have been known to attend parties together, with the recent one being the Halloween one.

We just hope they make it official soon. Even during interviews where they are together for House of the Dragon, one cannot miss their chemistry. It has been quite some time now, but few sources do speculate they are good friends. What do you think? Are they just great friends or is there something blooming amidst them? In case of any updates, stay tuned to us!

Where did the alleged couple meet?

The sets of House of the Dragon is supposedly the pioneer of their relationship. House of the Dragon was first premiered on 21st August, the year 2022, which is a series of ten episodes. It has garnered a rating of 8.4 on IMDB and 93% on Rotten Tomatoes, so we sure can say that it is worth a watch. It focuses on the House Targaryen. This series also stars Paddy Considine, Matt Smith, Emma D’Arcy, Rhys Ifans, and a few more essaying vital roles.