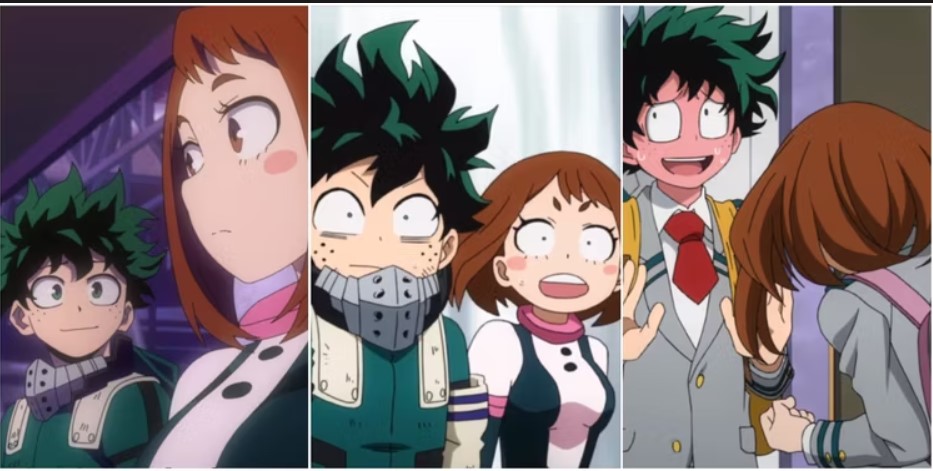 Deku is probably the most popular character from My Hero Academia. He is often shipped with many other characters from My Hero Academia; however, not all of them make sense. Deku is often popularly shipped with Bakugo as well. They even have a popular nickname for them named, Bakudeku. Now, the one question that each of the fans has in the fandom is, who should Deku date? Who should he end up with? Should it be his possible almost friend Katsuki Bakugo? Should it possibly be one of the villains? Should it be the best and everyone’s favorite girl Tsuyu Asui?

will midoriya and uraraka get together?

Kohei Horikoshi, the author of My Hero Academia, has never allowed his protagonist, Izuku Midoriya, to develop a proper romantic relationship. As Shonen and Shojo manga have repeatedly demonstrated, a high-school setting like the U.A. High Academy is usually the best place for relationships to blossom. However, the young heroes were too preoccupied with dealing with crisis after crisis. It’s not uncommon for Deku to be portrayed as extremely shy at first, always acting embarrassed around the other sex.

Midoriya was spending most of his time trying to improve his strength and get better at using his powers. However, this is not to say that he did not develop feelings for someone. As we said earlier, he had difficulty talking to the girls around him. Even with Ochako Uraraka, who had feelings for him, he struggled to hold conversations, and their conversations were cute and fun but not very much full of some chemistry.

Uraraka was the first person and girl he talked with when he first came to the U.A. school. A running gag involves Izuku blushing and flustered whenever Ochaco gets too close to him, implying that he has a crush on her. She even defends him from others who bully him with the ‘Deku’ nickname, claiming that she likes it because it stands for ‘never giving up. She is always encouraging Midoriya when he feels like he isn’t good enough. Midoriya thinks the world of her because of how selflessly she acts. She is brave and bright in his eyes, always standing up for what is right. He admires her strategic thinking and her willingness to go along with her plans without question. They both adore each other and are fiercely protective of one another.

But, when the All for One war broke out, they obviously did not have much screen time together, and then Deku was more focused on the war. Deku was the primary target for all of them as he had the One of All quirk, so he distanced himself from everyone, trying to unravel the rival team’s plans and more.

As the war lasted for weeks, Deku’s costume became covered in blood and dirt, and the ordinarily friendly and compassionate character took on a sinister appearance, dubbed “Dark Deku.” However, his class 1-A companions intervened to bring him back, and Uraraka played a significant role in this. She also made a compelling speech to convince the crowd that Deku should be let in to protect everyone.

However, Deku does like Uraraka, but only as a friend, and they do not really end up together, or even if he had romantic feelings for her, the way My Hero Academia is progressing, they might not end up together anytime soon.

Ochako Uraraka, also known as Uraraka or Uravity, is popular in My Hero Academia. She is also a student in class 1 A in the U.A. high school. Her main quirk is Zero Gravity, she can continuously float, making it easy for her to target her opponents and reach them easily.

MUST READ: Is The Arrival Of Dragon Prince Season 5 Release Date Confirmed?