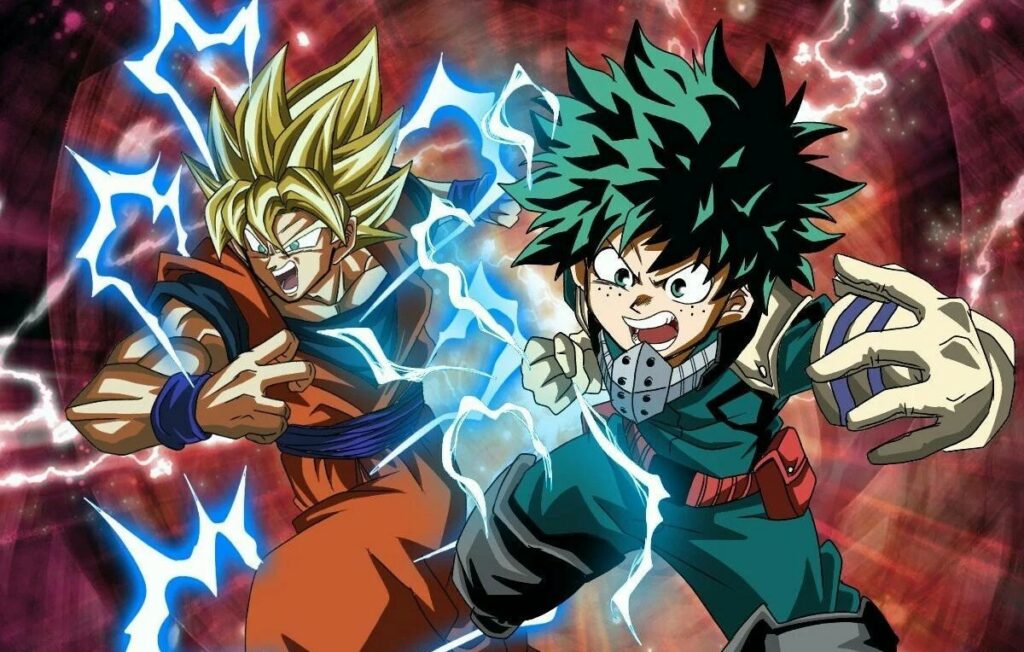 Once upon a time, someone dared challenge the authority and supremacy of Goku’s powers in front of Dragon Ball Z fans. That someone hasn’t been spotted since!

Such is the zeal with which Goku’s fans protect the pedestal on which they placed him the very moment he fell to Earth and was taken in by a kind old man. And we must admit, we are with you, Ball Z enthusiasts! Goku has it all – a kind demeanor, that gorgeous hair (we like them black than blonde, though!), and a moral conscience that keeps him from tapping into his base Universe 7 traits!

But seems like there is a new hero in town who’s looking to stir up trouble. ‘My Hero Academia’ fans seem to think that Deku (also known as Izuku) might be even stronger than our beloved Goku. THE NERVE! To even make that suggestion is blasphemy, a punishable offense. And this statement becomes even more infuriating when we see that even some Dragon Ball Z fans hold a similar stance on the question, which is part of the reason behind all the confusion with Goku and Deku’s strength battles.

Well, no matter how much we wish it to happen, we cannot expect Goku and Deku to fight it out between them so we could rest this topic once and for all and announce Goku as the winner. So, we are going to try to answer it ourselves today. And Deku fans? We hope you came prepared to be obliterated!

Is Deku Stronger than Goku?

No. Deku is not stronger than Goku. We are sorry if it sounds unfair or too direct to you but that’s the ultimate truth folks. Not to be a traditionalist but Goku is like a goddamn religion. The first Saiyan who made fans go crazy, made them fall in love with him with a flick of his tail. (We are very glad it was finally removed though! That thing was WEIRD!)

Is there any scene more iconic than Grandpa Son Gohan finding a little child crying his lungs out on the ground, abandoned in the midst of a forest, and him lifting the baby up and deciding to take him home? When there is a BIG HOLE in the ground nearby? That was the moment we knew that something epic was brewing behind the scenes and the proof of it was plastered on our faces plain as day as Goku grew up.

Now let’s shed a little light on Deku’s story. Deku, originally named Izuku, was born normal, his superhero muscles dormant, even atrophied. This bugged him more than anything else, given the fact that all he wanted in life was to become as strong, powerful, and heroic as his idol, All Might.
You may think us a little biased here, and maybe we are (who cares?!) but strength isn’t all about who can throw the strongest punches or who can break the most bones. Granted, that’s the most important part but that’s not ALL there is to it. This brings us to what we are trying to get at.

MUST-READ| Is Naruto Getting A Remake? Time for Celebration?

Goku: The More Heroic One

Goku’s life, from his conception to his end, had been a series of heroic events. Even though he rejected the offer to be Earth’s protector, or Universe 7’s proposal to become the most feared God of Destruction, his very aura emanated something primal, something that couldn’t effectively be explained but we, as viewers, sure could feel it.

That is what makes a hero. Don’t get us wrong. One look at that green-haired boy Deku and our heart melted, especially when you take into account his tormented childhood, but that he lacked that oomph. From the very beginning, he struck us more as a ‘boy next door rather than a superhero in the making.
Yes, yes. We know, that was the whole point of the show. Deku was supposed to develop his powers later on and believe us, we too went gaga over his blue hair transformation into a super strong hero later on, but Goku’s character still reined supreme in our eyes.

Simply for reason that Goku’s character, apart from possessing a strength that ran through every cell of his body, contains more depth, more kindness, more heart, and much, much more power than Deku’s.

So comparing Goku with Deku is like comparing the whole sky with a bunch of clouds. Deku’s recent popularity may have overshadowed Goku’s deeds in Dragon Ball Z for the time being but when the cloud of Deku’s current popularity wears off (and it WILL.) people will soon return to worshiping the God of all powers, mental, and physical, and of the heart, GOKU.

MUST-READ| Is Naruto Gay? The Answer Came Out To Be No!