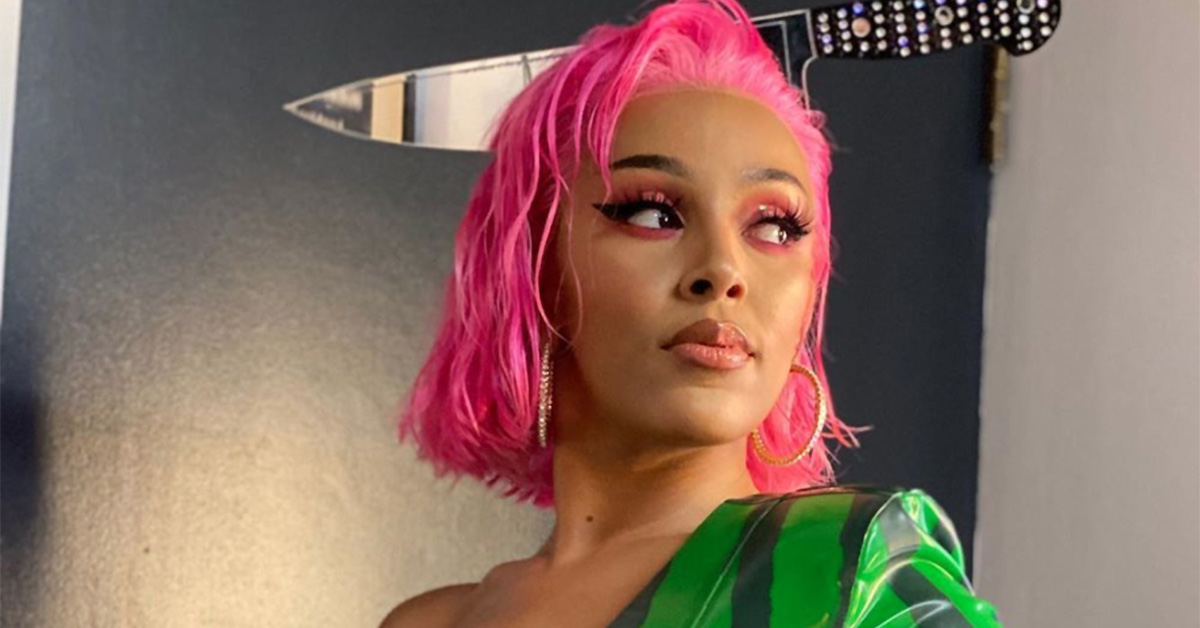 The sensational American popstar, Amala Ratna Zandile Dlamini is on our radar. Don’t get confused, you all know her very well, she is none other than the very famous and gorgeous, Doja Cat. She is known for her new-age rapping style. This American rapper, singer, songwriter, and record producer is renowned all over the world. She started her career at a really small age. Back in her teenage days, she used to make and release songs on SoundCloud. It has been an incredible journey for her.

At the mere age of seventeen, she wrote a song named “So High”. This song grabbed the attention of Kemosabe and RCA Records and thus she got her first-ever joint record deal! Just like every struggling musician out there, Doja Cat has also faced numerous obstacles in her life. She became worldwide popular in 2018. I hope you all remember her single “Mooo!”. The song was highly loved by the audience out there. Ever since then, Doja Cat has been under the spotlight.

Doja comes from a huge family. She has many siblings, all are scattered across the globe. But unfortunately, she is barely in touch with any of them. As per our sources and studies, she hardly knows them. There is not much information present on the web about her siblings but we have heard a little about her elder brother, Raman Dlamini. Her mother and brother have always been by her side.

Before highlighting Amala’s siblings, we would like to discuss a little bit about Amala’s early life. The 26 years old famous American singer was born in Los Angeles. It wouldn’t be wrong to say that Doja Cat’s mother and father are also pretty artistic like her. She has always been highly attached to her mother and brother.

Coming to her father, Dumisani Dlamini who happens to be a veteran South African performer of Zulu descent is renowned in the industry for his incredible performance at the famous Broadway musical event named Sarafina.

Sources say that Doja Cat has been quite open about her early lifestyle. She doesn’t share a cordial bond with her father. Doja was originally born in Tarzana. But then she was shifted to Rye, New York. She has spent her first five years with her maternal grandmother, who happens to be a Jewish architect and painter.

At the age of eight, she moved in with her mother and brother. They used to live at the Sai Anantam Ashram, which was located among the mountains of Santa Monica. For almost four years, she practiced Hinduism there. The swami and founder of the Ashram, Alice Coltrane is also seen as an American jazz musician. Some sources say that he kind of inspired Doja to be a singer.

As per studies, Amala even sang bhajans at the temple. Her lifestyle changed yet another time when her family shifted to California. They used to stay originally in Oak Park. Back in California, Doja developed a brand new habit! She developed a deep interest in dancing. She even started attending dance school.

From skateboarding to crazy surf camps in Malibu, she enjoyed her teenage days a lot. As we already mentioned above, Doja has mainly grown up with her elder brother. Since Dlamini and her brother belonged to a mixed-race family, they often faced harsh racism in their neighborhood.

If you are a hard-core follower of Doja Cat, then you must know by now that she is also a trained Bharatanatyam dancer. She originally learned singing from her aunt. While growing up, Doja was not highly interested in studies. Just like every musician out there, she too has faced numerous ups and downs in her life.

Since she didn’t excel in her studies, many people even tried to pull her down. Some even questioned her career decisions. In an exclusive interview, Doja was seen speaking about her eleventh standard. When she was just 16, she decided to take the most challenging decision of her life. She dropped out of her school.

Dlamini still recalls her bad days. She knew she was highly interested in dance and music and that’s why she decided to leave her junior year course. When she was struggling, her friends were shining high! Most of them were discovering the high roads of their career. This kind of depressed her. This is also one of the main reasons behind her attention deficit hyperactivity disorder. She felt anxious and lost.

But God has been graceful towards her, after struggling for years, she finally got her best shot in the industry. The viral meme worked wonders for her.Her sibling list mainly includes the name of her elder brother. Doja’s father Dumisani left the family behind in the US. Sources say he missed his hometown in South Africa and that he came back to his true roots. Initially, he expected his family to support his decision but things didn’t go the way he assumed.

Doja claims that she has never known her father personally. But sources say that they met once in New York and is still seen as their last meet-up. Her father was mainly caught up with his grand Broadway event, that’s why he didn’t manage to spend any time with Doja and her brother Raman.

Their family history is very complicated. Doja claims that she doesn’t share any type of bond with her father. But Dumisani says the other way around. In many uncut interviews, he has said that he shares a healthy and cozy relationship with her daughter.

Back when Doja was a mere teenager, she was highly addicted to marijuana. In an uncut interview, she opened up about her stage name. Amala got the name from one of her favorite cats. The name also reminds her of her bad addiction issues. Back when she was highly involved in weeds, she was kind of infatuated with the weed culture. As she started working on her career as a rapper, she thought of the word ‘doja’.

Yes, her stage name describes her as a pothead teenage girl, but now she has recovered from her past addiction. As the years passed by, she discovered her true interest. She became more refined and mature. Doja Cat’s music is highly influenced by hip-hop and pop culture. Her music style also showcases different patterns of R&B and pop rap. Doja is also seen as a social media influencer.

She is among those women, who set goals for the whole female community out there. She is broad-minded and full of life. She wants people to remember her artwork. Apart from music, she has also established an advanced career in visual art and dance.

In this same context, we would like to talk about her second full-length studio album, named, Hot Pink. The album represents her raw version. She has managed to quit her bad habits. She is no longer seen as an addict or a regular chain smoker. She faced an acid trip which changed her whole outlook on life!

All in all, Doja is a loving human being. She is among the new-age women who are ready to break the code for females. She is a firm believer in freedom and is grateful to all her fans and followers who have constantly supported her. She feels really lucky to have so many fans around her. They are truly her driving force.

Doja Cat maintains a net worth of around $8 million. Given her expanding musical career of so many years, the amount seems quite justified and we all know how talented she is, she has already planned a lot for 2023. In the upcoming years, the number will surely shoot even higher.

Last year the singer even purchased a lavish plot of land in Beverly Hills. The house is as stunning as her personality. As per our estimates, in the upcoming years, the renowned American rapper will cross the goal of $10 million.

So far, she has released almost 88 songs. She currently has around 378k followers on SoundCloud. Moreover, she also has over 2.1 billion subscribers on YouTube. She earns quite a good amount from these activities as well.