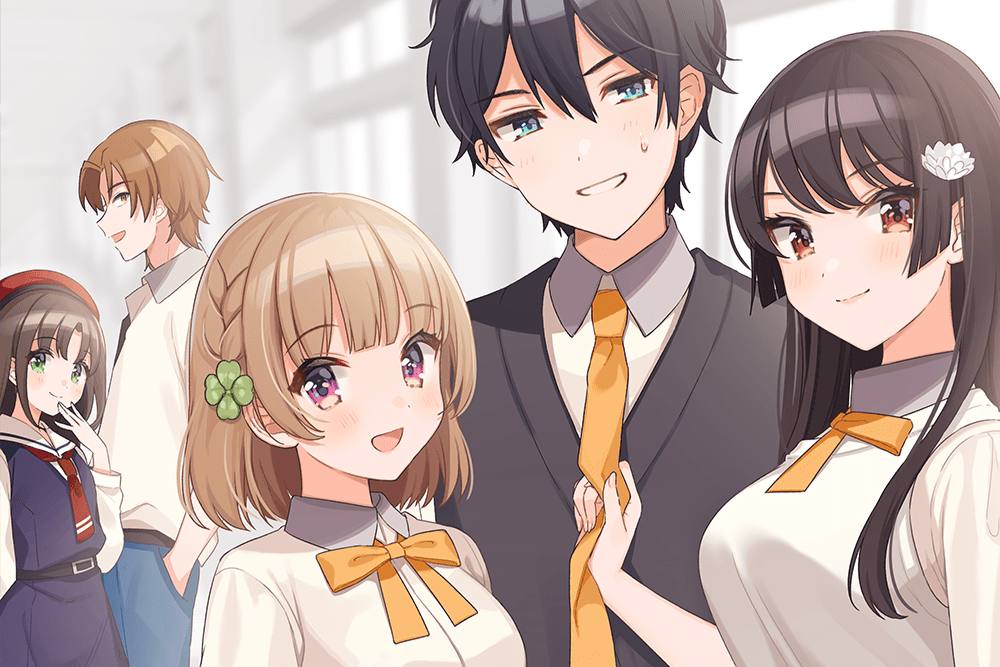 Osamake is the abbreviation of the name Osamake: Romcom Where The Childhood Friend Won’t Lose (Osananajimi ga Zettai ni Makenai Rabu Kome). It is a light-hearted manga series that got an anime adaptation on the 14th of April 2021. As the name suggests the story is supposed to be one where the main lead ends up with his childhood friend which usually does not happen in a rom-com anime. Gradually, as the story progresses, we learn that the main 3 female leads who are interested in the male lead have been a part of his childhood in some way or another.

Every single female cast interested in Sueharu Maru (the male lead) are his childhood friends. The story exaggerates how he is to choose whom he would likely have a proper relationship with. The series was rated a 3.1/5 on Crunchyroll and a 5.8/10 by IMDb. The viewers commented that they gave the series an incomplete ending and that it almost felt like they forgot to release the last episode for the season.

There has been no official announcement about renewing Osamake for another season yet. Since the first season aired in April 2021 it was predicted that the second season could possibly air in the second half of 2022, which doesn’t seem very likely as we’re reaching the end of 2022 and there has been no news about it.

The ending of the first season was pretty grey as they did not conclude it well. They left all the viewers in a dire situation without giving a distinct answer about whom the main leads ends up dating. Rather than giving answers, they left us with more and more questions leading to more negative critics of the series.

Osamake is a story of a 17-year-old boy named Sueharu Maru who falls in love with a novelist studying in the same class as him, namely, Kachi Shirokusa. Shirokusa is a beautiful, diligent, and sturdy girl who according to Maru has a sweet spot for him. Tetsuhiko Kai is Maru’s best friend who seems to be supporting him with the whole Shirokusa thing.

Amidst all this one day Maru’s childhood friend Shida Kuroha who confessed to Maru comes to him and teases him and asks him if he would go out with her which Maru politely denies. After a while, Shirokusa declares that she has been dating Mitsuru Abe a television actor from the same school for about a week. This statement hits Maru quite hard and he leaves the school all depressed. Kuroha helps him regain his composure and motivates him to take revenge on his first love.

Later on, it is determined that Shirokusa has known Maru for a very long time and has been in love with him too, and was doing all this because of a misunderstanding. The story basically revolves around Maru in the center and these two girls around him trying to win him over. A third childhood friend Momosaka Maris is introduced later in the series and is confirmed to have feelings for Maru.

MUST READ || Magi Season 3 Release Date: Will The Anime Be Renewed?

Since the first season did not conclude the story of Sueharu Maru and his childhood friends the second season would definitely be a continuation of the first, that is, it will mostly have the same characters as the first season and maybe a couple of new additional characters to make the story more complicated and exhilarating.

Where To Watch Osamake Season 2 Online?

If there were ever to be a second season for the Osamake series, then it would probably be premiered online on Crunchyroll like the season it will be succeeding.

If you still haven’t watched the first season of the series and are somebody who enjoys typical romantic comedies Osamake would be a good time pass for you. You can binge it on Crunchyroll.

MUST READ || The Red Panda, Aggretsuko Season 5 Release Date To Come Up Soon!