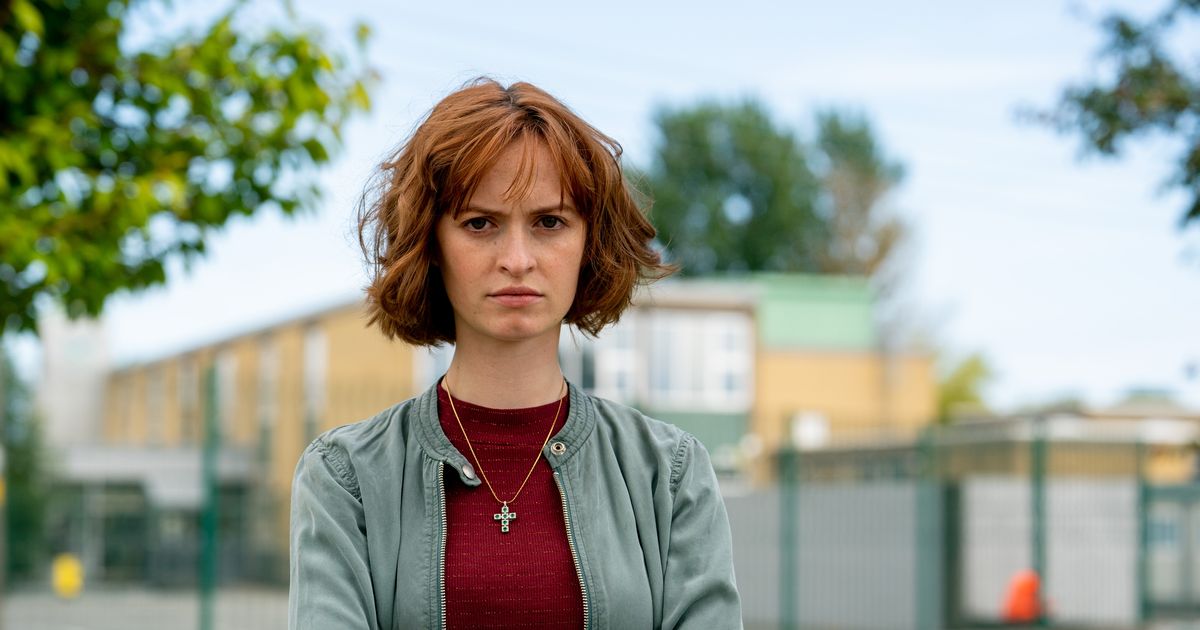 Have you ever heard about the beautiful idiom “ love is blind “? perchance in this story, the idiom fits perfectly. There is a famous line in cinemas ” when people are in passionate love, they tend to cross every limit.” Well, the story of Maxine Carr eventually proves this line.

How love can easily mesmerize someone in which the lover doesn’t hold back to kill anyone or mask a crime, this series is going to showcase the infamous Soham Murder which happened 20 years ago.

The series is on-air. The first episode was released on 10 October 2022. Three episodes will be streamed across Channel 5 this week in consecutive order by 9 pm.

Is Maxine Based On A True Story?

Yes, the story of Maxine Carr is a real criminal incident that flustered the whole United Kingdom back in 2002. There were two main miscreants.

Maxine Carr and Ian Huntley. Maxine was born on February 16, 1977, and was raised in Grimsby, Lincolnshire. As a child Maxine was a reserved personality, mostly spending her time alone. She was an introvert and hence barely had any communication with any of her companions. She had very few friends. Weak in academics, but little Maxine always aspired to become a teacher.

In 1999 at the age of 22, Carr met the love of her life, Ian Huntley at a nightclub in Grimsby. She instantly got attracted to him and decided to date him.

In one of her investigation interviews she said ” The moment I saw him, I got enamored towards him”. He had a charming persona and confidence. He charmed her with roses and gifts. After a few weeks of dating, Carr moved to his apartment.

We should take a moment to admire Carr’s lover for whom she is going to surrender her life ( will agree to surrender someone else life too).

Ian Huntley was born on January 31, 1974, in a working-class English family. He was raised in Grimsby, Lincolnshire. He was a caretaker at Soham Village in Cambridgeshire East Anglia, where he was very warmly welcomed and accepted by the community. They trusted him, offered him a job and a home, and also gifted him a car. But they didn’t know they are giving shelter to a predator.

Later in the year 2002, Carr moved to live with her boyfriend. In the spring she got a position as a volunteer support assistant at St Andrew’s Primary School. Everything was going smoothly, the couple was in passionate love until one day, a fight broke off between them and Carr left the place and went to Grimsby to meet her mother. That night she decided to go clubbing where she spent the night talking to another man. The next day, when she got up, she heard the news from the reporting channel about the 10-year-old missing girls Jessica Chapman and Holly Wells, who were students of her school. When she came back, she knew that her lover was the main culprit, but instead of informing anyone, she helped him. Deep in his love, she cleared all the evidence. When she was out of town Huntley murdered two 10-year-old girls, Jessica and Holly. They were best friends and had been at a barbeque party at Holly’s house on 4 August 2002, after dinner they decided to go out and explore. They silently left the house without telling anyone until Holly’s mother noticed that the girls are not in their room.

That August night proves to be shocking and terrifying for the whole town. Huntley invited the girls into his house and lured the 10-year-old kids. He managed to throw the bodies 10 miles away from the town.

The next day hundreds of volunteers, including Huntley and over 400 Police officers began searching for the missing girls. Their bodies were found after 13 days of extensive searching. The nightmare is turned into reality, everyone was in grief. On the other hand, Huntley has his plans.

He tried to help the police in the investigation, and his lover Carr helped him. She followed him with every investigation, and they both even came on reporting channels. But this victim card did not prove to be very safe because as we know every criminal leave a clue behind him, so Huntley.

In the investigation, he gave several clues which grew the suspicion of the police. The Journalist who was the first to become suspicious of Huntley and Shane Nestor a headteacher who also found Huntley suspicious, tried to search for evidence and got a box of files containing Huntley’s job application and realized that something was fishy about him. He grew more suspicious and later uncovers that Huntley’s background indicated his history of physical and sexual violence towards women and underage girls. There was also a hidden past, Huntley had a daughter, Samantha Bryan from an abusive relationship he had with 15-year-old Katie Brayan.

Police always had an eye on him as during one day he asked the police, ‘ How long do the DNA samples are detectable? Which was strange for a common man to ask. His girlfriend followed him everywhere and as the suspicion grew, she lied during a report that Huntley was with her on that night but as we say karma will never leave you, that report was seen by a man who saw her alone on that night.

The police later got all the evidence of the car and the handprints and after a few months. Huntley and his girlfriend were arrested and Huntley was sentenced to jail for double life imprisonment for a minimum of 40 years. But after 21 months of imprisonment, Carr was released because the court didn’t find her guilty as she was only able the truth and misguide the officers.

She has been given a new identity, a car, and a passport. She has given birth to a boy and now being happily married for five years, while Huntley is still in prison and would not be released by 2042. He claims that Holly’s death was an accident and he had to kill Jessica because she was the eyewitness. Huntley apologized for the deed and the pain and suffering the family has gone through. He also claims that his former girlfriend has said many lies in court.

MUST-READ| Is The Raincoat Killer Based On A True Story?

The newly launched TV series is under social controversy. According to the family of the victims, the show is not at all sympathize with their dead daughters. The creators have explained that they respected the dignity of dead individuals. The show is under audience controversy too, as it left them with a question mark about Maxine’s second life. She is Britain’s most hatted woman and giving her a second chance is not very well accepted by the audience. It is expected that the show might threaten the hidden Maxine who is now undergone various plastic surgeries and enjoying her life. As per the assumptions, the police, and Undercovers are planning to move her again. As per the hidden sources, too much time and public taxpayers’ money is being spent to save the secret individual.

This TV series generates a big question mark for the government, society and the dead bodies scream like they are asking the reason for their brutal murder. Human is an animal and sometimes their actions are far from humanity. We are a part of a society where everyone has a hidden monster that is waiting patiently to prey.

Through this series, the creators try to uplift many such cases where people have lost their life. The TV show has also showcased sexual abuse towards women in society. The series revolves around two main characters one of who commits the crime, of brutally killing the girls. Along the episodes, the psychic face of the Characters has been shown. The audience gets a pinch of Maxine’s hidden face. she is not that much innocent as has been depicted.

In various interviews, her glimpse of psychic and dangerous identity has come out. The creators are been successful in representing the nature of the characters and how they act and talk. their predator’s evil mindset through which they cunningly try to manipulate everyone. One kills and the other hides. The show’s screenplay and plots are thrilling and any thriller enthusiast surely will not get disappointed.

This British Crime themed series was streamed live on Channel 5 of the United Kingdom, and its first two episodes are released. It streams live by 9 pm.

MUST-READ| Is Sons Of Sam A True Story? Is It Based On A Serial killer?