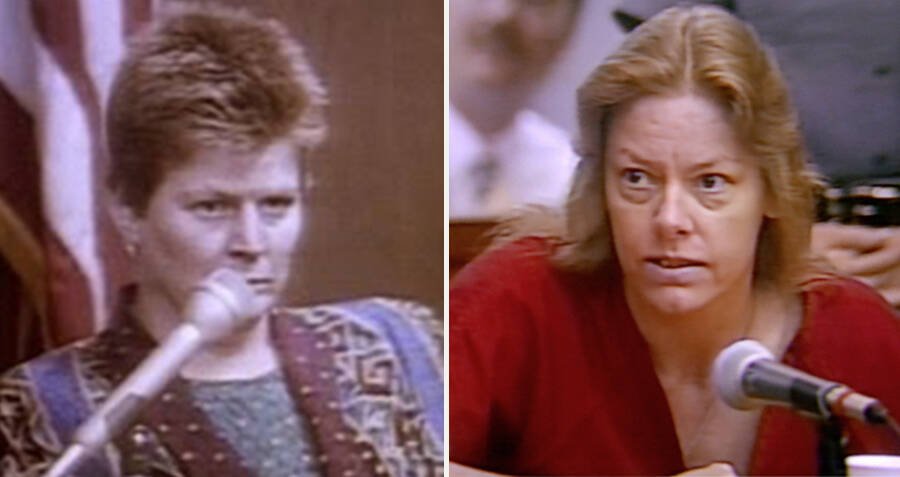 Aileen Wuornos was an American serial killer born on February 29, 1956. Aileen had a very bad childhood as both her parents got separated before her birth. Her father was just 16 years old when Aileen was born. At that time, he was serving his life in prison for child molestation. Later, he hanged himself to death in the year 1969. Aileen was abandoned and abused as a child. Aileen dropped out of school and later turned to prostitution. She used prostitution as a way to make quick money.

Aileen was a lesbian.  She has been arrested various times for many cases like robbery, vehicle stealing, and forging documents.  Aileen used to kill male motorists. When arrested, she confessed the crime but claimed that she killed them in self-defense as they were trying to molest her. This made many people think of her as a heroic figure for standing in front of those male predators.

Aileen’s childhood traumas and her sex work may be the main reason for all the mental disorders she suffered. She was abused by her grandfather and his friends when she was a child. Her grandmother chose to ignore this.

Later, she was thrown out of the house at the age of 15. She also had very few friends because of her temper issues. It became very difficult for Aileen to maintain relationships. This all lead to the development of borderline personality disorder in Aileen. She was married to Lewis Gratz Fell, who was a millionaire. It is reported that Aileen used to steal his cheques and money. They got married in the year 1976. They stayed married for 9 weeks and then got divorced. Lewis Gratz Fell, Aileen’s ex-husband died on 6 January 2000. Aileen’s life was a subject that interested many people, so a documentary named Monster was made which depicted her life. The monster was released in the year 2003.

Who Is Aileen Wuornos Girlfriend?

Aileen Wuornos’s girlfriend was Tyria Moore. They both lived together for nearly 5 years and were in a committed relationship. Aileen had confessed to Tyria that she had killed a man but in self-defense, which Moore believed. When she came to know about more murders Aileen committed, she left her and moved with her family.

But later, Moore found out about 3 more murders Aileen committed which made her talk to the police about the same. Moore cooperated with the police and got a confession out from Aileen. It is reported that Tyria Moore gave testimony of 75 minutes on the fourth day of the trial and that was the day they last met. After the trial, Tyria is said to live a secretive life. It is reported that she lives in Pennsylvania.

Aileen’s grandfather- termed as his adoptive father, and his friends used to sexually assault her. Aileen became pregnant after being raped by one of her grandfather’s friends. Her age was 14 when she got pregnant. When her grandparents came to know about her being pregnant, they sent her to the home for unwed mothers.

Back then, when girls used to get pregnant before marriage they used to live in the home of unwed mothers. Aileen gave birth to her son on 23 March 1971. Her age was 15 when her son was born. They put the baby up for a closed adoption. A family adopted Aileen’s son. As per reports, Aileen didn’t know anything about the family who adopted her son which made it impossible to get any information about her son.

How did Aileen Wuornos die?

Aileen murdered at least 7 people between the years 1989 and 1990. She used to shoot them multiple times and then left their bodies on the highways of southern Georgia and Florida. People also think that she might have killed one or two people more, but haven’t found any bodies yet. She was again convicted in the year 1992 for a murder case. Later, Aileen pleaded guilty to 3 more of the murders she had committed and also admitted that the prior killings she committed were not in self-defense but for profit. She spent 10 years living on death row.

Aileen was then sentenced to death and was executed by lethal injection where they first use a sedative to paralyze the person and then a drug is injected which stops the heart following death. Aileen was executed on October 9, 2022. Her body was cremated after her death with her ashes being scattered beneath a tree in her native.