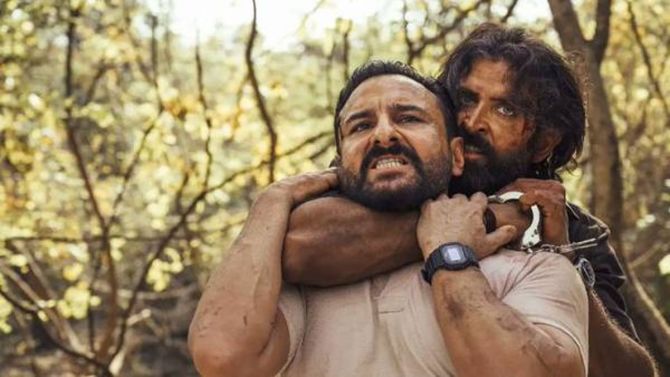 Let me start with how nervous I was when I first heard about the South Indian film, Vikram Vedha which was a blockbuster getting a Bollywood remake. Remakes usually decrease the audience and there are many things at risk. But, the cast, the BGM, the storyline, the action, everything looked so overwhelming. Comparing it to the remake, Vikram Vedha stands out. The stars selected for the roles were perfect and the way the story continues seems very natural.

Enough about the review, let’s break down our main question here. At the end of the film, Vikram and Vedha were seen pointing guns toward each other. On the verge of pulling the trigger, the film ends! Well, who died? Was there a historical connection with it? Or will there be a second part? Let’s break down the question and answer it specifically. (For those who have also watched the remake might know the answer, for those who don’t, read below).

Reasons: Who Dies At The End Of Vikram Vedha?

While Vikram was on the verge of getting killed by one of the police officers, Vedha jumps out of nowhere and saves him. That was the time when Vikram realized he was wrong all along. Being a police officer does not give him the right to kill anyone. He is like Vedha, they both are like each other, from different perspectives.

At the end of the film, no one kills each other, they just point their gun and stand there realizing what they were doing wrong, how morals can make you a bitch sometimes! So, no one dies, but one question appears, why did anyone of them trigger the fire?

We all are aware that the film is inspired by an old folklore ‘Vikram And Vethalam’ (you can also see the glimpses at the beginning and the end of the film). The story is about a powerful King, Vikrama Adithya who was sent by a Yogi on a quest to bring Vethalam. Then the famous ‘Question-Answer’ session happened. When the last question happened, Vethalam tells Vikram that when he takes him to Yogi, Yogi has planned to kill Vikram, but if Vikram kills Yogi, he will forever serve him.

The same we saw at the end of the film, Vikram realized that he wasn’t the ‘Good Cop’, he has killed innocent people, and that could be the reason he didn’t pull the trigger.

The movie is made in such a way that it could tell people stories, it could tell the importance of morals and values in your life. It wants to tell how your single decision can make you pay it for your whole life. The film has majorly focused on this, so killing either of them would have been a bloody end to the film, which they did not have in mind. They wanted to depict every perspective wins, but leave something that they will remember forever.

Both Of Them Would Not Have Done It

Well, until now it’s clear that neither of them would have killed the other. Vedha is the one with strict values, he knows when to do what! Like with the case of his brother, Shatak, he did not kill the one who did it, rather he went for the one who forced him to do it. So, he wasn’t going to kill Vikram. On the other hand, Vikram also realized a dark truth about himself, so there’s no way he will kill the one who saved him.

Chances For A Sequel

If anyone of them would have pulled the trigger, there wouldn’t have been a chance for a sequel. The film would have ended with the first part only. Does this mean there is a chance for part 2? Yes, there could be, as it left the audience on a cliffhanger, although, no one would expect any of them to die (We love them both), if the makers have planned something big and something huge than this, then 2nd part is most likely.

Overall, this was the most intense climax in the history of Indian cinema. Vikram and Vedha had their own valid reasons to kill each other, and on the other hand, they had their own reasons to forgive each other. And in addition to this, they both had mutual respect for each other.

If you ask me, I would go for forgiveness. Firstly, I will not like to see any one of them dying. Secondly, forgiveness will lead to ‘Peace’ which is of the utmost important thing.