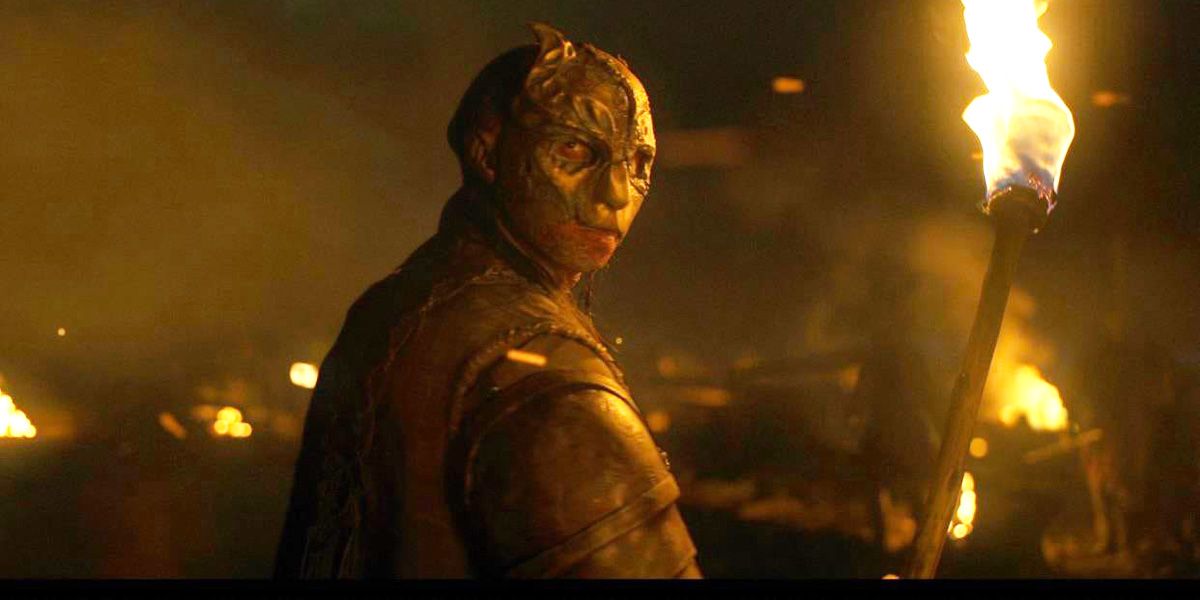 Whereas the Targaryen Civil War appears destined to take centre stage in House of the Dragon’s plot over time, the first few episodes of the series are slowly laying the groundwork. Part of that is introducing viewers to the Triarchy, a maritime alliance, as the first outside force to jeopardize House Targaryen’s security. The brutal leader of this group of combatants is known as the Crabfeeder, but who exactly is this man in a mask, and what role does he serve in House of the Dragon?

Who Is Crabfeeder On House Of The Dragon?

Craghas Drahar is the man known as The Crabfeeder. Crags, a native of Myr, was given command of the Triarchy’s military after the coalition successfully drove Volantis forces from the Disputed Lands, a portion of Essos. Craghas commanded the Triarchy’s ship and men in a conquest of the Stepstones after establishing peace for the Free Cities. Craghas’ violent methods of retaliating against his foes are how he acquired the nickname “Crabfeeder.” He has the thousands of dead bodies of pirates fastened to stakes on the beach, as seen in episode 2, and he abandons them there to perish in the incoming tide. However, many crabs are drawn to the decomposing remains and view the disgusting scene as an open-air meal. As depicted in House of the Dragon, Craghas’ main goal is to conquer Stepstones, and the Seven Kingdoms initially praised him for driving away numerous outlaws from the region. But as time went on, Crabfeeder, with his army, developed a thirst for the toll money, which led Lord Corlys Velaryon to request that Daemon Targaryen put an end to Crabfeeder’s corruption.

House Velaryon made much money in the Narrow Sea trades, but Craghas Drahar’s high prices hurt the economy. As a result, in 106 AC, a full-scale battle for Stepstones starts (After the Conquest). Crabfeeder’s army will be tested with the publication of House of the Dragon Episode 3 when they encounter the fury of Daemon and Corlys’ soldiers, especially with the ferocious capabilities of the dragons by their side. This guide should assist you in comprehending the Crabfeeder from House of the Dragon & his general Game of Thrones mythology.

ALSO READ: Will There Ever Be Game of Thrones Season 9 Release Date?

Introduction Of Crabfeeder In Episode 2

In episode 2 of House of the Dragon, we first see the Triarchy force and its captain after Lord Coryls Valeryon forewarned their approach in episode 1. The three Free Cities of Myr, Lys, and Tyrosh on Essos’ western coast organized this force. They have assaulted the Stepstones, a collection of islands in the Narrow Sea separating Westeros and Essos, to clear them of pirates who had been plundering the adjacent waters, as Corlys recounts. They are headed by a man known as the Crabfeeder. However, as the first scene of episode 2 demonstrates, the Triarchy uses some terrifying methods to get its point across.

What Sets Up With Him?

In the books that served as the basis for House of the Dragon, Daemon Targaryen eventually kills Craghas the Crabfeeder. Lord Corlys, the Master of Ships, had forewarned Viserys after the Triarchy’s powers had taken the Stepstones, but the King had done nothing because he did not want to risk an open conflict with the Free Cities. The Triarchy’s forces then started to charge tolls on any boats that tried to trade in that region. The tolls were initially accepted, but when the Triarchy increased the cost, Corlys and Daemon Targaryen joined forces to attempt to take the Stepstones for them, defying King Viserys’ intentions. The Targaryen and Valeryon alliance finally overthrew the Triarchy after a conflict that lasted around two years. Still, the Crabfeeder met his demise when Daemon, wielding the Valyrian steel blade Dark Sister, beheaded him. The reality that the Triarchy & Crabfeeder are easily vanquished supports the prologue’s assertion that the Targaryens are so strong that the only way the House can crumble is if it tears itself apart rather than succumbing to external dangers like the Crabfeeder.

READ MORE: How Many Episodes Of Dark Winds Are There?

What Place Was the Crabfeeder First Mentioned?

In the beginning episode of House of the Dragon, Lord Corlys Velaryon (Steve Toussaint) first introduces the Crabfeeder. Corlys, in charge of Westeros’ most oversized navy, discusses the danger posed by the Triarchy, a coalition of independent cities that came together to expel a band of pirates posing a threat to Stepstones (a small group of islands). Who wouldn’t want to get rid of thieving pirates? This is how the King and the other members of the council see it. Corlys, on the other hand, recognizes this for what it is: the union of sovereign states raises potential issues for everyone in King’s Landing.

In addition, Triarchy and the enigmatic entity known as the Crabfeeder have taken ships and soldiers from Lord Corlys, or the “Sea Snake,” as he is also called. The second episode opens with a guy being slowly devoured by tiny crabs, revealing the origin of Drahar’s name. He doesn’t think killing the pirates will be easy enough; instead, he prefers to crucify them on the sand, torturing them to death with mountains of crabs and the incoming tide. Although viewers are still eager to learn more about this sinister individual, Lord Corlys, who stands to lose the most due to the danger, provides the most information about him. For many people in Westeros, especially the Velaryon family, whose riches and military might are directly impacted by the incursions, the Stepstones, located in the confined Southern Sea, is a significant trading route.

What the Crabfeeder Informs Us Something about George R.R. Martin’s Book?

The Myrish prince commander Craghas Drahar appeared in George R.R. Martin’s book Fire and Blood. With the aid of the prince from Myr, the Triarchy conquered the city of Volantis before the events of the tv show and moved on to the Stepstones. After all the pirates were beaten, Drahar joined the crew of several ships, including Lord Corlys’, and stole, looted, and fed their crew members to the crabs. His distinctive appearance is one of the characteristics that set him apart from other villains. He wears a mask that mimics the infamous Leatherface from the Texas Chainsaw Massacre and appears to have some skin condition.

The partnership between Lord Corlys and Prince Daemon, which appeared to be formed after Episode 2, might be what ultimately topples the Crabfeeder and the Triarchy. That partnership might also cause problems for King Viserys, who has enraged everyone involved. Craghas Crabfeeder might be seen as either a ruthless pirate who must finally be eliminated or as the horrible character who will somehow end King Viserys’s reign. Time will only tell.

House Of The Dragon Episode 2 Recap

However, “The Rogue Prince” lacks some of the storytelling quality that the show’s premiere did. This awful hour of television does not completely dash the show’s chances of succeeding on the Iron Throne, but it lessens those chances. About six months after “The Heirs of the Dragon’s” ending, “The Rogue Prince” begins. The titular wayward prince Daemon Targaryen (Matt Smith) has moved in at the Targaryen ancestral mansion of Dragonstone after stomping out in a furious huff. We might not always know what transpires in George R.R. Martin’s fictitious history, just as we don’t always know what happened in our world’s natural history. The show’s use of fictional accounts has already begun to falter, as evidenced by the episode’s apparent climax, in which Rhaenyra (Milly Alcock) travels to Dragonstone to face her uncle about squatting in her home. In practice, spectators must admit that there isn’t much to it, even though one dragonrider travelling to a scorching island to deal with another dragon rider may sound rather heroic in history. There are numerous talky situations in “The Rogue Prince” where the conversation isn’t up to par. The show’s first scene, which has a lot of talk between Viserys and his intended child-bride Alicent (Emily Carey), is compelling even if we discover the horrifying fact that Viserys isn’t a skilled craftsman and the stonemasons are the ones who have built.

Viewers in India can watch House of the Dragon exclusively on Disney Plus Hotstar. The HBO Max drama’s second episode will be on the OTT platform. To offer a variety of intriguing deals for streaming on your mobile device, laptop, or another digital platform, many telecommunications companies have partnered with Disney Plus Hotstar. It was revealed that the House of Dragon’s second episode would air on August 28 in the US. Due to time zone variations, the attack will be accessible in India on August 29. The transmission time of 6:30 am IST was confirmed by the Disney Plus Hotstar services. There are numerous plans available for members of Disney+ Hotstar to select from. By selecting one of the plans and signing up for the OTT platform, you can start the second episode of House of Dragon. Additionally, four devices can access the Premium Plan at once in 4K (2160p). Two devices with up to full HD access are provided with the Super Plan (1080p).